Climate change is bringing unwelcome change to coastal communities around the globe. Locally, projections are that the Port Gamble S’Klallam Tribe — with about 1,250 enrolled members, a 1,300-acre reservation on the Kitsap Peninsula, and 2.5 miles of shoreline — will lose Point Julia, an area of substantial cultural importance, to sea level rise.

Generation after generation of the S’Klallam Tribe historically lived and fished on the south side of the Strait of Juan de Fuca and at Hood Canal. But in a January 1855 treaty with the new Washington Territory, the tribe signed away its rights to about 435,000 acres of land, and the people were subsequently relocated to Point Julia on Port Gamble Bay. Since then, Point Julia has been used for shellfish harvesting and other practices significant to the tribe, such as launching its graceful cedar dugout canoes on long voyages.

Additionally, Point Julia is a significant archaeological site, providing a record of continued occupancy along the shore of Port Gamble Bay for well over 1,000 years. 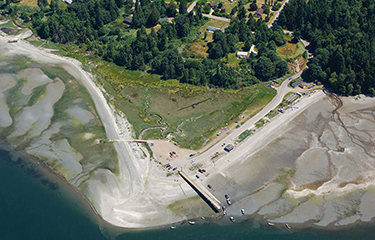 Photo courtesy of the Washington Department of Ecology [enlarge]
All of this land at Point Julia, including tidelands where the S’Klallam Tribe does subsistence shellfish harvesting, will be lost to the projected sea level rise.

In the face of global climate change and irreversible sea level rise (SLR), the tribe is now confronting the peril to Point Julia and its associated cultural and subsistence resources. Clearly, those who rely on the shore and its ecosystems for their way of life will be most affected by SLR. That’s why the tribe recently invited Ridolfi Inc. to team up with its own natural resources specialists in modeling the effects of sea level rise over the next century.

The amount of sea level rise is not spread equally across the Earth, and projections of SLR are therefore made based on factors both local and global in scale. Work published in 2008 by the UW’s Climate Impacts Group and the Washington Department of Ecology identified four primary drivers of SLR projections for coastal waters of Washington, including Puget Sound:

• Changes in atmospheric circulation that push more water toward shore

Of these, the thermal expansion of seawater currently has the greatest impact.

To develop SLR predictions for Point Julia, the team gathered three types of existing data: light detection and ranging (lidar) elevation data, which is collected by aircraft; the 19-year average of the mean higher high water (MHHW) tidal line for Seattle; and the projections of SLR already made for the Puget Sound basin.

The Puget Sound SLR projections had been developed for three scenarios (low, medium and high) in the years 2050 and 2100, so those became the target dates used in the Point Julia analysis as well.

Geographic information systems and NOAA’s VDatum software were used in the modeling. (VDatum helps align the lidar elevation data with the height of local tides.) The modeling consisted of three principal steps:

• First, lidar data were converted to the MHHW for Puget Sound.

• Next, the converted data and the Seattle MHHW benchmark were used to create a “virtual shoreline,” representing the present-day MHHW mark.

• Last, the SLR projections made in 2008 for Puget Sound were added to the present-day MHHW.

The present-day MHHW is at 8.97 feet above local sea level. Adding the sea level rise projected for Puget Sound on top of the MHHW virtual shoreline makes it possible to predict how many acres of land at Point Julia could be covered by seawater in 2050 and 2100.

The prediction for the high scenario is that all of Point Julia except the access road — nearly 14 acres — will be under water by 2050. (The low and medium scenarios predict just over 7 and 8 acres.) By 2100, all of Point Julia will be inundated under the high scenario, and about 18.5 acres will be lost, including the tribe’s combined hatchery and herring roe processing plant, which is at the base of the Point Julia bluff. (The 2100 low and medium scenarios predict over 8 and 11 acres.)

These modeling results predict that sea level rise will lead to severely negative impacts over the next century and that the Port Gamble S’Klallam Tribe will likely lose land important to both its livelihood and culture. However, the modeling results can also be used to help the tribe apply strategies to lessen the impacts. For instance, it may be possible to build a new dock at a higher elevation or find ways to protect the hatchery from flooding.

The modeling results — which are easily updated when new SLR projections for Puget Sound become available — can also be used in feasibility analyses to evaluate the economic impacts of flooding, the usefulness of upgrades designed to combat flooding, and even whether the tribe will be forced to relocate yet again.

These topics and more are being addressed in the tribe’s Climate Change Impact Assessment, now under development. An important next step will be to model how the future shoreline could affect slope stability of the bluff, where residences and tribal facilities currently overlook Point Julia.

The Port Gamble S’Klallam Tribe is not large, nor is it wealthy. But it is tenacious. The tribe has survived because historically the people were determined to overcome damaging changes imposed on them by outside forces. In the company of many others around the globe who live near or depend on the shore and its resources, the Port Gamble S’Klallam Tribe is now embarked on its most challenging journey.

Callie Ridolfi, PE, is CEO of Ridolfi Inc. Her major interest is in designing sustainable communities, and she often works with Northwest tribes to achieve their economic and environmental goals.