Regulators and scientists interested in Puget Sound recovery are consistently challenged by several questions: How are these complex ecological systems affected by development along the shoreline? What are the appropriate mitigation requirements for such effects? And how can we calculate the ecological benefits provided by proposed mitigation/restoration?

The goals of mitigation are driven by Section 404 of the federal Clean Water Act and Section 10 of the Rivers and Harbors Act. Implementation of these federal regulations is in the hands of the U.S. Army Corps of Engineers and the state Department of Ecology. State regulations — shoreline management programs and critical areas ordinances — also play a role.

When a project can’t avoid impacts to aquatic resources, compensatory mitigation is required to replace the loss of functions. This includes functions provided by the marine shoreline of Puget Sound, also known as the nearshore.

In addition to mitigation projects, a number of restoration efforts are being undertaken for the recovery of Puget Sound largely driven by the Puget Sound Action Agenda and other species-specific recovery plans. 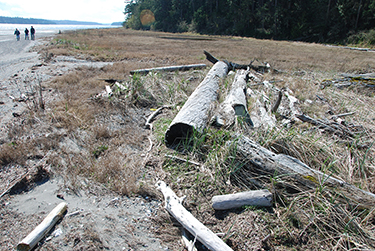 Photo courtesy of ESA [enlarge]
The Navy is working on a nearshore restoration model at Indian Island.

Without proper assessment, the question remains, will these actions lead to the recovery of the resources of Puget Sound?

For freshwater wetlands in Washington, Ecology has developed a system for calculating loss of ecological function and the size and type of appropriate mitigation. But for the complex mix of marine riparian, tidal wetlands, intertidal non-wetlands and subtidal habitats of the nearshore environment there is no standard system to calculate loss of ecological function, appropriate mitigation, or potential restoration outcomes.

Each project is evaluated individually, often relying on the best professional judgment of the participants. This often leads to disagreements among project proponents, regulators and stakeholders regarding the level and type of mitigation for a particular project and a protracted permitting process that is repeated for each new project. A more systematic approach is needed to address these issues.

The prospect of developing such an evaluation system, or nearshore model, is complicated by two challenges: If the model is too simple it may not be a scientifically valid reflection of the complex nearshore environment; if the model is too complex it becomes unwieldy and not understandable to regulators and other potential evaluators.

Back in 1996 the Puget Sound Nearshore Ecosystem Restoration Project made a bold step forward by developing the “Conceptual Model for Assessing Restoration of Puget Sound.” Conceptual models are simple outlines that explain the causes, interactions and effects of environmental change. A number of entities including the Puget Sound Partnership, Ecology and others have built upon and adapted conceptual models to better understand and explain how we should target our restoration efforts in Puget Sound. But to be applicable to an individual project’s effects and appropriate mitigation planning, a more detailed and site-specific assessment method is still needed.

NOAA has developed one such system, the Habitat Equivalency Analysis, which calculates how much habitat to restore based on the calculated loss of ecological services that occurs between the initial impact and when the restoration site becomes fully functional. Stakeholders to the NOAA process meet and come to an agreement on model topics such as value of the affected resources, level of impact and restoration priorities.

One drawback of the NOAA system is that, unlike Ecology’s calculator for freshwater wetland mitigation, there are no standards for what should be evaluated or the value of lost ecological functions — these must be developed for each particular project.

What’s needed for nearshore restoration planning in Puget Sound is a standard approach for determining loss of ecological function and for restoration planning. With hundreds of millions of dollars and many agency resources going to restoration and recovery efforts, it seems paramount to develop such a nearshore model for accurate assessment.

Over the past two years a science team and a varied group of stakeholders, led and funded by the U.S. Navy, have been working on such an approach for a nearshore model. The driver for this effort is the Hood Canal In-Lieu Fee (ILF) Program, sponsored by the Hood Canal Coordinating Council and approved by the Army Corps and Ecology with participation by tribes and state, federal and local agencies.

With an ILF approach, a permittee pays a fee to a third party in lieu of conducting project-specific mitigation. The third party then implements a restoration project according to the program guidelines.

The Navy is using the ILF Program as a way to compensate for impacts of various projects in Puget Sound. Costs of ILF mitigation for a particular project — by the Navy or other permit applicant — will be calculated using an agreed upon formula and then mitigation will be implemented by the ILF Program. This type of third-party mitigation program makes permitting more efficient and eliminates the need to convene the same group of regulators each time the Navy plans to build or upgrade shoreline infrastructure at its Hood Canal facilities.

The scientific analysis from the model would also be used in the environmental review documentation to determine and disclose impacts from a project and verify appropriate mitigation. Good natural resource stewardship is dependent on accurate assessment of all resource functions.

While a temporary system is in place for determining the loss of ecological function and the required level of mitigation, the Navy is exploring the use of a project-level model to quantify these numbers, with assistance from a core science team, peer reviewers and stakeholders.

The goal is to develop a rapid assessment method that uses a standard set of questions to evaluate the baseline condition and the post-project condition.

Answers to these questions are used to automatically calculate a score for each valued ecosystem component (VEC). These components are critical resources that represent marine riparian, tidal wetlands, tidal non-wetlands and subtidal habitats. The expectation is that a trained evaluator would need only one day of geospatial data analysis and one day of field work to answer the questions.

What should be evaluated?

Ask resource specialists to pick the five most important components of the Puget Sound nearshore and you’ll get a variety of answers. For a number of resources — eelgrass, salmon and shellfish for instance — there is a broad consensus on the need to include these elements in a project-specific model. For other topics there can be a spirited debate. Can Orcas be affected by a single shoreline project? What elements of shellfish should be evaluated? How do we account for processes such as the movement of sediment from bluffs to beaches? And how is the relative “importance” of these resources to one another weighed in such a model?

Even for those elements that everyone agrees should be included in the model, determining the prime “indicators” for measurement and assessment leads to another round of discussion. For some VECs, such as eelgrass and macroalgae, direct measurements of density and area can be taken. To quantify others though, such as shorebird use, we need to rely on indirect measurements of habitat quality — such as substrate type, presence of human disturbance, presence of wrack (decaying organic material), and eelgrass and macroalgae extent. In addition, new scientific information is becoming available all the time, with efforts by a number of entities to better understand pressures on the health of Puget Sound.

While a group of scientific experts might be able to come up with answers to these questions and develop a nearshore model behind closed doors, it’s the stakeholders — tribes, non-government organizations, and federal, state and local agencies — whose natural resource knowledge and experience will help to build a robust and acceptable evaluation system.

If this nearshore model, currently in draft form, can strike a reasonable balance between over simplicity and complexity, the region will have another tool available to steer regulators toward the best restoration actions. While field verification and calibration of the draft model has not yet occurred, this effort could lead to a more systematic approach for nearshore permitting, decrease associated costs, and improve mitigation and restoration outcomes.

Such an approach could be a next step in restoring the nearshore of Puget Sound — a goal we all share.

Jim Keany is an ecologist and senior program manager at ESA in Seattle.