No guts, more glory: Why it pays to go minimal

Yet there is one thing on which these unwilling bedfellows agree: The fewer systems a building has, the better. Minimizing heating, cooling and ventilation equipment means lowering initial capital investment, lightening energy footprint, and reducing long-term operating expenses. While extracting or minimizing mechanical systems in new construction requires out-of-the-box thinking, the fresh approach wins every constituency.

NK Architects designed the project on behalf of Euclid Development, which tapped Compass Construction for execution. 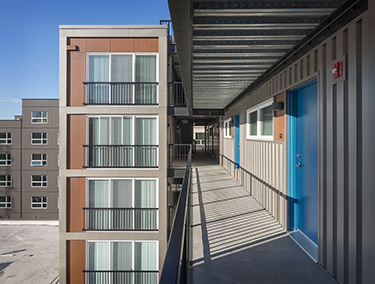 This project team did not come at H2O with an agenda to rip the building’s guts out. Like most new-construction ventures, it considered multiple mechanical systems, and any number of conditions pushed and pulled at our thinking about them. Only as the project progressed did it become clear to let ’er rip.

Here, one of the most significant constraints of the project was its small site. A feasibility study inherited from a previous developer determined that the former surface parking lot had capacity for only 30 housing units.

Creating a unit mix that ranged from townhouse-style homes to affordable studios allowed us to accommodate single occupants, families and low-income people equally. Meanwhile, as we developed the concept of placing circulation outdoors, we recognized the tremendous environmental, capital and operating savings associated with it.

A significant portion of a building’s energy use is consumed by lighting, heating and ventilating corridors that are rarely occupied. Outdoor spaces do not require nearly as much upkeep, so employing exterior circulation slashed several hundred thousand dollars in mechanical capital investment, and many times more savings in operations over the economic life of the building.

We also recognized that the units themselves benefited from the decision thanks to better cross ventilation and additional light. Subtracting an interior corridor adds one exterior exposure to the layouts of the apartments, allowing each unit to harvest daylight on two or three sides. With Seattle’s relatively temperate climate the units are also open to cross breezes.

Because the strategy of exterior corridors improved both financial performance and environmental benefits, the H2O project team reinvested its first-cost mechanical savings into additional passive-design strategies — techniques for reducing heating and cooling loads — for tenants.

Energy Star appliances are installed throughout. In this case, we thought that if tenants’ bills are lower, they’re more likely to stay.

The actual building performance has exceeded that expectation, as today H2O enjoys a higher-than-average occupancy. It also rents $0.10 to $0.25 more per square foot than two nearby competitors.

Equally important, H2O’s house meter runs at a snail’s pace. Common lighting is controlled by sensors that switch on and off according to available daylight, there are no fans spinning away in an enclosed, empty corridor, and the elevator is the most efficient product on the market.

Examine the house meter anytime, and you’ll find that utility costs for common areas are as little as 5 percent of a similarly sized multifamily building comprising traditional mechanical systems, and never more than 10 percent of that local benchmark.

Euclid Development is reaping the benefits of happy tenants and a bargain per-unit sales cost, and its bank is servicing a low loan-to-value mortgage. Unwilling bedfellows no more.

For some readers, the takeaway of H2O Apartments’ story is that designers should always employ exterior walkways on their buildings. But there is another, larger principle to consider. We took nothing for granted. We did not presume the original feasibility study was etched in stone, nor that the typical way in which Seattle multifamily buildings are designed — with internal corridors that are illuminated and pressurized 24 hours a day — was the only way.

Research and development took more time, but in committing to the process, we aligned energy objectives with the envisioned operation of the building. As a result H2O escapes the trap of paying operating costs that traditionally rival debt service.

As a result, too, NK Architects and Euclid Development have begun eliminating systems as company philosophy. How can you join us? Take time to think about how your building behaves, take steps to design that scenario with minimal mechanical systems, and take nothing for granted.

You don’t even have to call it sustainable, even though it is. Just call it good business.

Brandon Nicholson is a founding principal of Nicholson Kovalchick Architects in Seattle. He leads the firm’s presence in the Mid-Atlantic.