Stone34 to put its deep green bona fides to the test

Stone34, a five-story, 127,000-square-foot office building under construction at 3400 Stone Way N. in Seattle, is paving the way for a new generation of highly sustainable buildings in the region.

Designed by LMN Architects and built by Skanska, the project is targeting LEED platinum and energy and water use reductions of 75 percent from baseline. The building and site design contribute meaningfully to the public realm in ways never imagined within the confines of a LEED checklist, and its location on the Burke-Gilman Trail provides the opportunity to establish itself as a community icon of healthy, low-impact living.

Perhaps the project’s most far-reaching contribution to the advancement of green cities and places will occur after construction finishes this spring. Stone34 stands among the most thoughtfully designed sustainable buildings in the city, but the real story plays out after the occupancy date, as the tenant and the community take leading roles in determining the building’s ecological footprint, and assess the effectiveness of the design.

After completion, developer and builder Skanska will work with the city of Seattle and the International Living Future Institute to conduct a rigorous process of post-occupancy monitoring to ensure the project meets its sustainability targets. 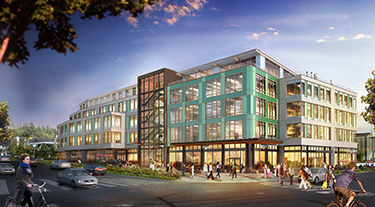 Images courtesy of LMN Architects/Skanska [enlarge]
A centerpiece of Stone34 will be a glass-enclosed stairway designed to encourage occupants to skip the elevator.

This is no small effort, requiring significant self-regulation on the part of Stone34’s tenant, Brooks Sports. If Brooks exceeds its energy and water budget it may be assessed a monetary penalty.

Dashboards will display readings from multiple submeters to give occupants a clear picture of the effect their operational patterns have on energy and water consumption. The readings will be available on mobile tablets for visitors and occupants to carry around the building.

Designed for the site

Fortunately for Brooks, the architectural and engineering design stacks the odds in their favor. Beginning with the building’s form and continuing through to its glazing strategies, heating and cooling systems, and plumbing, every aspect of the building is optimized to respond to the unique assets of the site and the Pacific Northwest climate.

Within the linear urban site at the interface of the Wallingford and Fremont neighborhoods, the building massing is configured to take best advantage of the solar exposure available to the site and the opportunities for community connections. Additional building height, provided through the Seattle Deep Green Building Program, makes possible a narrow floor plate that maximizes the amount of floor area with access to daylight and leaves generous room for ground-level community uses.

From this starting point, the LMN and WSP Flack + Kurtz collaborated on an intensive interactive study of the effect of different glazing patterns on electrical lighting demand, heating and cooling demand, and solar glare for occupants. The team ran numerous simulations in specialized daylight-simulation software, using historical weather data on cloudiness levels over the Fremont/Wallingford area.

The selected fenestration strategy balances the performance of the exterior envelope, access to daylight and views, and community connectivity. Vertical, punched windows pattern all facades, giving way to a more generous area of glazing at the intersection of Stone Way North and North 34th Street that connects the activity of the building with ground-level community spaces, the Burke-Gilman Trail and Lake Union.

A significant advantage of this intersection is the opportunity to locate the building entry and a fully glazed stair as the centerpiece of the building’s public facade. In many ways, this move becomes an iconic symbol of Brooks Sports and its green philosophy, celebrating physical activity and discouraging the energy cost of taking the elevator. The messaging is clear: Occupant choices and behavior are what ultimately make the project succeed, and active outdoor life does not stop when a user leaves the Burke-Gilman Trail.

The dynamics of climate drive heating, cooling and water use systems as well. Due to the size of the site and the Pacific Northwest’s relatively high average rainfall, along with efficient fixtures and a commitment to low-impact water use from the tenant, the building meets 77 percent of its non-potable water demand with rainwater, and reduces the use of potable water for non-potable demands by 93 percent.

Rainwater collectors capture more than 90 percent of precipitation falling on the site. A 10,200-cubic-foot below-grade cistern stores treated rainwater from the roof all year for non-potable building uses, while a 7,250-cubic-foot detention vault collects stormwater from impervious and pervious pavement on the sidewalks and the soil beneath the planting beds.

Ceiling-mounted chilled beams throughout the occupied spaces condition the air through an energy-efficient process that works in combination with the hydronic mechanical system. A thermal storage tank on the first floor makes the whole system more efficient, containing phase change materials that store cooling capacity to use for free cooling at a later time, thereby extending the work of the building’s heat-recovery chiller.

Outside of the work environment, the building provides bountiful opportunities for users to participate in realizing its full ecological potential, both in terms of people’s interaction with nature as well as with each other.

For Brooks Sports, a retailer of active sportswear, access to the Burke-Gilman Trail is a key alignment with company culture and values, and encourages employees to run, walk and bike to work. At the same time, generous human-scale amenities in front of and surrounding the building give back to the bike/pedestrian-centric neighborhood, creating an active community hub that enhances the site’s existing assets.

All three street frontages feature active ground-level retail spaces that spill organically into the sidewalks and create one layer of human activity. Another layer comes from users of the trail and surrounding streets, as well as building occupants.

Conceived both as a trailhead and a street theater, Barbara Swift’s design for the ultrawide sidewalk along Stone Way culminates in a stepped plaza at the intersection with 34th Street, a place for active use of the Burke-Gilman Trail to begin, a pit stop along the way and a destination.

[enlarge]
The ultrawide sidewalk along Stone Way has nooks for sitting and gathering. Many of the plants will be edible including oregano, hop vines and blueberry shrubs.

The scale of the space is such that the entire southern half of the site facing the trail can accommodate large events, complementing the daily activity of the building and the street. Small, extensively furnished “nooks” throughout all frontages provide safe, comfortable spaces for people to find a place for themselves, or join together in groups.

The carefully crafted and idiosyncratic use of materials reflects the spirited neighborhoods of Fremont and Wallingford. Blackened steel and reclaimed wood provide texture and scale, and reflect natural processes. Furnishings come in all shapes and sizes to accommodate diversity. Drinking fountains serve thirsty runners, and pavement insets continue Fremont’s well-known identity as the “center of the universe,” connecting runners and bicyclists with the larger world with marked distances circumnavigating the globe.

Integral to all of these spaces, native trees and plants nurture the innate human attraction to natural systems and patterns. The plantings occur in ecologically functional configurations, supporting natural succession and the distribution of species into specific microclimates.

Many plants are edible to encourage interaction with the landscape: Shrubs and groundcovers along the sidewalk include blueberry and oregano, while hop vines grow on poles on the wall and continue on the mechanical screens of the roof deck. As plants change in pattern and color throughout the year, so does the interplay of light and shadow across the site.

While Stone 34 has components that allow its occupants and visitors to monitor and calibrate their behavior to maximize energy and water performance inside, the community spaces offer a kind of analog observation and feedback with the environment.

As the life of the building unfolds over the coming decades, the level of health and vitality it brings to the neighborhood will be apparent to all through the transparency of the building facade, the high visibility of the community spaces along strong circulation axes, and the body of art, photography and human experience that builds around the project.

The composite of Stone 34 reinforces the importance of active participation by everyone in the places they inhabit.

Adrian MacDonald is the communications manager for LMN Architects, with a background in A/E industry journalism and media arts. Wendy Pautz is a partner at LMN Architects and the lead architectural designer of Stone34.