How transparency can change the game on green building

In a recent post to the DJC’s Green Building Blog, I covered some of the latest efforts at transparency showcased last fall at GreenBuild 2013, the annual international conference organized by the U.S. Green Building Council.

Green-building activists are encouraging manufacturers to reveal product ingredients so that project teams and building owners might make better product selections and avoid the worst ones. Manufacturers have a number of ways they can do this, such as using labels, product certifications and voluntary disclosure mechanisms.

Product transparency efforts have been evolving over the last two-plus decades, and are much improved from their inception. They’re not perfect, however, which is why I was not too surprised that my post drew a comment from Anne Whitacre, a specifier who calls transparency a Pandora’s box.

She grants that while the “intent behind transparency is well meaning, the implementation of this may be far more complicated — and not transparent — than the promoters may anticipate.”

Whitacre points to flaws she sees in the Healthy Product Declarations (HPDs) made voluntarily by manufacturers and shared through the HPD Collaborative and other organizations.

She claims “it is possible (with an HPD) to exclude a high enough percentage of materials to essentially void the entire concept,” and that the HPD process “doesn’t easily take into account multiple supply chains of large national/multinational manufacturers.” 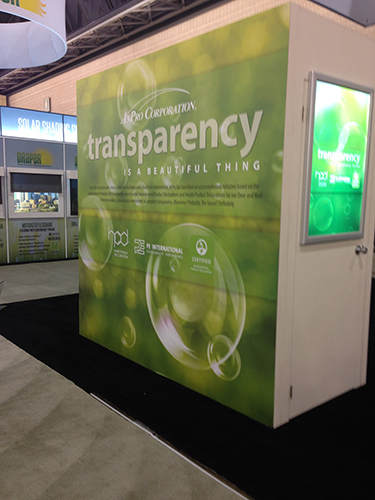 Photo courtesy of Kathleen O’Brien [enlarge]
Manufacturers like InPro Corp., which makes door and wall protection products, are responding to calls for more transparency about their materials.

Whitacre provides examples of problem situations, including vermiculite sourced from the Libby, Mont., mine that contained very small, but potentially very hazardous naturally occurring asbestos, and recycled concrete aggregate that “had enough radon in it to set off detectors.”

Questions like Whitacre’s should be used as opportunities for cultivating improved product ingredient disclosure processes, however, not for dismissing transparency initiatives.

The ultimate goal of transparency initiatives is to transform markets.

When the norm in the marketplace becomes transparency, those who have a vested interest in that market will not want to be seen as uncooperative, and will naturally want to be comfortable with what they are being asked to reveal. And that can lead to a change in the product or manufacturing process.

We’ve seen this work with the Bullitt Center. Products were reformulated or redesigned to satisfy questions the project team had about them while pursuing compliance with the Living Building Challenge materials “petal.”

Although they account for the lion’s share of the green-building movement’s drive for transparency, product ingredient listings and green-building product certifications (including when the “product” is a building!) are just one aspect of an expanding transparency initiative within the movement.

Corporate social responsibility is another, evidenced by the “Just” label recently released by the International Living Future Institute, which focuses on increasing social justice, and the AIA 2030 Commitment, which focuses on reducing energy consumption and associated carbon dioxide emissions.

Organizations of all types and sizes can earn the new Just label when they are willing to report on 22 social and equity indicators related to six categories: diversity, equity, safety, worker benefit, local benefit and stewardship. The labeling process is voluntary.

As the name implies, the AIA 2030 Commitment is designed expressly for members of the American Institute of Architects. Member firms participating in the 2030 Commitment have agreed to measure and share information about the energy performance of the buildings they design as well as the energy they consume. Over 200 firms (including more than a dozen based in Washington state) are participating.

As a faculty member for the AIA 2030 Professional Seminar Series, I got to hear two local 2030 Commitment signatories, DLR Group and Miller Hull Partnership, present openly to members of other firms what and how they were doing. This is transparency at its best.

And you can bet that those in the audience were wondering how they could get their firms to sign on.

The public sector’s recent enactment of energy benchmarking disclosure policies for existing building stock is another example of how transparency is being used to create change in the marketplace, and likely to be successful where it’s undertaken seriously.

The city of Seattle is one of nine cities and two states in the country that has enacted such policies. In 2013, Seattle collected whole-building annual energy use for commercial and multifamily buildings 20,000 square feet or larger, and in January released a report, “Seattle Building Energy Benchmarking Analysis,” for 2011/2012.

The beauty of Seattle’s policy is that it is not requiring a new level of energy performance, but instead energy performance benchmarking and reporting. According to the city’s report, Seattle boasts the highest compliance rates in the nation, with 93 percent reporting their 2012 energy consumption.

By providing information “never before accessible to policymakers or the market” the city hopes to better inform its public policies going forward, as well as help building owners make better decisions.

In fact, it was the city’s decision to enact the energy disclosure policy that led to development of the Seattle 2030 District, a private-sector collaboration of property owners in downtown Seattle. Property owners have shown an unusual willingness to share data among competitors — with an eye on keeping at bay any initiatives to mandate energy performance for existing buildings.

The city’s policy, and the private-sector initiative it launched, is expected to produce the incentive and opportunity for improving the energy performance profile of the region’s building stock.

So to Whitacre’s point, a transparency initiative can be a complicated undertaking, and perhaps imperfect as a result, but as a lever for change in the marketplace — where opacity has ruled — its transformative powers are already being seen.

Kathleen O’Brien is founder of The Emerge Leadership Project, a nonprofit organization with a mission to “accelerate life-sustaining solutions in the built environment through emergent leadership principles.” She also founded O’Brien & Co., the oldest green building consultancy in the Seattle area.