Carbon-rich tidal wetlands down, but not out

About a hundred years ago, the Snohomish estuary was dominated by Sitka spruce forested wetland. Downed logs and driftwood occupied much of the channel in large rafts of diverse species.

Historical accounts report that it was possible for some of these floating natural structures to remain in place for long periods of time. New trees up to 3 feet in diameter were reported to grow on top of the rafts. Some were over 25 feet deep, consisting of many layers of large logs, 3 to 8 feet in diameter.

Today, the Snohomish estuary is much changed.

The estuary was logged and miles of dikes and levees were constructed in the late 19th and early 20th centuries. Since then, the Snohomish estuary has been used for agriculture, wastewater treatment, and as a site for several landfills.

Over the last hundred years these organic tidal wetland soils have subsided and eroded.

The good news is that large areas of the estuary have been restored and reconnected to the tides through both accidental and intentional breaches in dikes and levees. Some of these restoring areas have been rebuilding soils for decades, while other locations are being designed and planned as future restoration sites.

Local communities and state agencies are capitalizing on the benefits that tidal wetlands afford as a food source, water purifier, habitat provider, boaters’ paradise, and as storage for atmospheric carbon dioxide. While many of us realize the food, water quality, habitat and recreational opportunities that tidal wetlands offer, many may not be aware of the carbon storage benefits of restored and existing tidal wetlands. 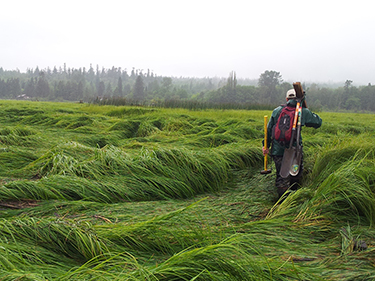 Photo courtesy of EarthCorps [enlarge]
Lyngbye’s sedge, one of the first plants to colonize tidal flats, dominates this wetland in the Snohomish River estuary.

Tidal wetlands are buried treasures. The old ones, especially, are packed with valuable stored carbon. They soak up carbon dioxide, one of the most abundant greenhouse gases plaguing our atmosphere.

It’s for this reason that restoration and conservation of tidal wetlands and forests has been dubbed “blue carbon.” This term aptly describes the carbon captured and stored in plant biomass and organic soils, or sediment, from coastal wetlands and forests, salt marshes and sea grasses. These ecosystems capture carbon in living plant tissue and transfer this carbon into layers of carbon-rich soils, season-by-season.

An immense amount of stored coastal carbon has been eliminated by development.

This development has taken the form of logging, diking and draining tidal wetlands, dredging for transportation, and urban development.

With many coastal cities adjacent to large rivers and estuaries, blue carbon habitat is increasingly threatened. Here in the Pacific Northwest, large estuaries have varying rates of tidal wetland degradation. The greatest impacts have been to the Columbia River estuary and to Puget Sound; losses in each of these areas have exceeded 70 percent.

The good news is that many of these lost tidal wetlands may be restored and re-engaged as a place for carbon storage in the global carbon cycle once again.

Today, the Snohomish estuary is a diverse landscape ranging from undisturbed coastal forest and wetlands to industrial uses. This mix of natural processes and human intervention presents an excellent opportunity to study the effects of different coastal land uses and restoration efforts on carbon resources over time.

In 2013, a multi-disciplinary team consisting of faculty and graduate students from Western Washington University, EarthCorps professionals and scientists from Environmental Science Associates took a three-tiered approach to determine the magnitude of carbon benefits from restoration.

First they analyzed historic, current and future landscape conditions of the estuary. Next, soil carbon and soil accretion rates were measured at representative sites throughout the estuary. Finally, the team applied carbon values to planned and full tidal wetland restoration scenarios.

For example, based upon analysis of currently planned and in-construction restoration projects in the Snohomish estuary, an estimated 2.55 million tons of carbon dioxide may be sequestered from the atmosphere over the next 100 years. This value is equivalent to one full year’s emissions from 500,000 passenger cars.

If plans are expanded to fully restore the estuary while allowing for existing large industrial uses to remain, the carbon sequestration benefit jumps to 8.9 million tons of carbon dioxide. This rate would equal a full year’s emissions from about 1.7 million passenger cars.

Preserving and restoring wetland natural areas buries carbon in sediment, and caps it with water. Plants collect atmospheric carbon dioxide into tissues and carbohydrates, eventually die, and sink into the organic muck that builds over the years. This process, which occurs globally along every continental coastline, has the capacity to do great things, measurably decreasing local greenhouse gases and making a world of difference.

Old tidal wetlands are loaded with valuable carbon. An immense amount of stored coastal carbon has been eliminated over the last 100 years. We need to protect the ones we have and find ways to restore and build new ones. Fortunately, in the Pacific Northwest, there are a multitude of opportunities to recover these lost treasures.

Danielle Devier, a Professional Landscape Architect and LEED-ND professional, has graduate degrees in both landscape architecture and ecology. She has a strong interest in climate science and local landscapes.