One of the great challenges of habitat restoration within a heavily built environment is fitting the puzzle pieces together. The focus is often narrow by necessity, and it’s not easy to return a site to its natural condition if everything around it remains as-is.

What makes the Billy’s Pond project in the Yakima River Basin unusual — and prototypical — is that the city of Yakima took the long view, bringing together salmon, infrastructure, flood control and recreation in an innovative and sustainable design.

Over the past 100 years, levees built in several reaches of the Yakima River to control flooding have modified natural flows; eliminated meandering, off-channel habitats important to fish; and disconnected the river from its historical floodplain. Now, a multiagency effort led by the U.S. Bureau of Reclamation will roll back some of this infrastructure along the river between Selah Gap and Union Gap.

In support of this “Gap to Gap” project, the city of Yakima opted to relocate the effluent outfall at its wastewater treatment plant. But more than that, the city also seized the opportunity to restore off-channel habitat where fish can rear and forage, and to move the Greenway Trail out of the floodplain. 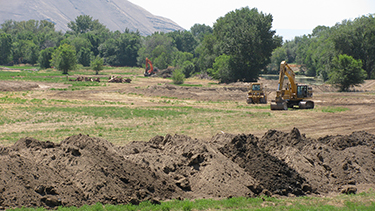 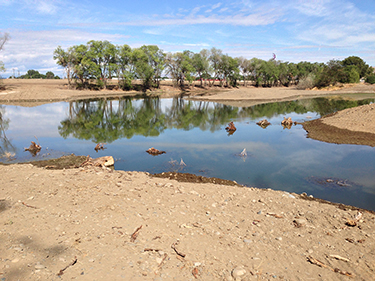 [enlarge]
Billy’s Pond was reconfigured with islands and large wood.

The Greenway Trail is a much-used, much-loved network of more than 10 miles of pathways that connects parks, lakes, nature walks and natural areas. In the vicinity of Billy’s Pond, the trail formerly ran along the top of an old, unmaintained embankment built decades ago to protect gravel mining and agriculture in the area.

Phase one of the city’s three-phase master plan for the outfall relocation is the Billy’s Pond habitat restoration, which encompasses 30 acres.

Billy’s Pond is 5 acres of open water created in the mid-1960s as a result of the gravel mining. The manmade pond, which is fed by groundwater, formerly drained through two 40-foot culverts, under the Greenway Trail, to a manmade ditch. The culverts were a barrier to fish passage, and the pond was supporting only warm-water, invasive fish species such as carp and bass, while the embankment provided a home to non-native and noxious plants.

With no infrastructure or homes in the vicinity, this city-owned property was a prime location where the Yakima River could take back the floodplain through natural processes if the river and its floodplain were reconnected.

Keeping the restoration as simple and natural as possible was an important focus of the design. It was also key that construction of this first phase of the master plan should dovetail with plans for phases two and three (now under construction) to maximize the value of public dollars.

Specific elements were selected that use sustainable design, such as reducing fuel use and limiting impacts on the site, to achieve both goals. Here are some details:

• During construction, heavy equipment was fitted with an automatic global positioning system to reduce the effort required for the earthwork. Inputting the design drawing to the machines meant that the GPS did things like calculate the curves. One outcome of this innovative use of GPS was that only a single fine grading pass was needed to meet construction specifications. Other benefits included savings in time and budget, as well as significantly reduced environmental impact.

• On-site materials like boulders, river cobbles and topsoil were reused throughout construction, eliminating the need to truck an estimated 30,000 cubic yards of those materials out and bring new materials in. That reduced fuel consumption and cost, minimized overall environmental impact, and limited chances to introduce invasive or exotic species to the site.

• To allow for a hydraulic connection between the river and the restoration area, the Greenway Trail was realigned to higher ground, reducing the need for costly maintenance by the nonprofit Yakima Greenway Foundation in areas that used to regularly flood. At the same time, new scenic viewpoints overlooking the restored floodplain were added to enhance the recreational experience for trail users.

• Community volunteers were enlisted to replant the new riverbank with native vegetation like sedges, willows and rushes, which not only provided obvious cost savings, but also opened the way to discussions among all the stakeholders about historical salmon runs in the Yakima River and water quality in the mainstem channel today.

• The design made use of current topography and the existing groundwater connection with Billy’s Pond to ensure that the restored habitat would not depend on surface water flow to stay productive year-round.

The Billy’s Pond project was completed in the early fall of 2013, just two years after designing and permitting began. The pond, which was naturalized to mimic abandoned channels and pools of the Yakima River, now promotes salmon recovery by providing off-channel refuge, rearing and foraging habitats. The barriers to fish passage are gone, invasive species are being removed, the Greenway Trail was realigned out of the floodplain — and infrastructure relocation at the city’s wastewater treatment plant, which sparked all of these gains, is under way.

Reconfiguring Billy’s Pond and reconnecting the Yakima River to its historical floodplain have turned out — by design — to be good for fish, good for people, and good for the river.

A skilled fisheries biologist with more than 22 years of experience, Sherrie Duncan has dedicated her career to protecting local watersheds and restoring natural habitats. She volunteers on technical advisory groups for WRIA 10/12 Puyallup/Chambers-Clover Creek watersheds, and on the technical advisory committee of Citizens for a Healthy Bay in Tacoma.