The coastal regions of Louisiana are suffering significant erosion and land loss. According to scientists, Louisiana has already lost about 1,900 square miles of coastal land throughout the 20th century and they predict it could lose an additional 700 square miles in just 50 years if no action is taken. About a football field per hour of Louisiana coastal land is currently eroding away.

Engineers found that while working to restore Louisiana’s coastal protection they didn’t have any materials that were proven to work other than armor rock, which is often ineffective as it sinks into the inherently poor soils common in coastal Louisiana.

Since the 1990s, the federal and state governments have spent hundreds of millions of dollars on coastal restoration, but the efforts have been unable to stop land loss.

As a result, the Natural Resources Conservation Service of the U.S. Department of Agriculture put out requests for new innovative design proposals that didn’t involve rock products and had never been used in coastal Louisiana.

The purpose of the Non-Rock Shoreline Protection Demonstration Project was to install and monitor several non-rock shoreline protection systems along coastal areas in Louisiana. 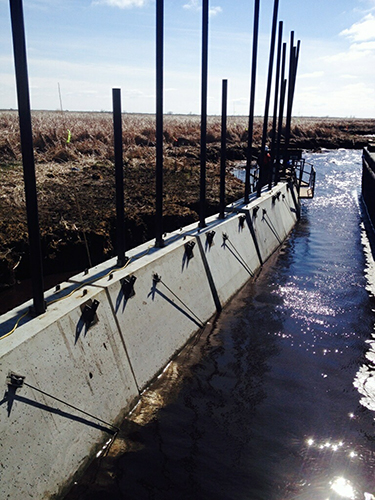 [enlarge]
Each module is secured by four pin piles that extend 60 feet below.

Shark Island, Louisiana, is the area this system is being tested and monitored in over the next two to three years.

Jansen Inc. and Bellingham-based Merit Engineering worked together for nearly two years to design the patented Buoyancy Compensated Erosion Control Module. The team was selected as one of the three finalists out of 17 designs submitted to the Natural Resources Conservation Service.

The Jansen/Merit system fully prevents wind and wave action from reaching the shoreline. The modules consist of a concrete shell with foam, secured with four 60-foot pin piles and placed adjacent to one another in a line along the shoreline. They are 10 feet long by 7 feet tall and designed to last at least 20 years.

Modules are strong enough to withstand hurricane conditions, yet versatile enough to set in any geographical location using small lightweight equipment. Bellingham Marine Industries built them at its Florida plant.

To date the system has had the least amount of shoreline erosion out of the designs that were engineered and constructed.