Numerous commercial property owners, developers and local governments appear to have positioned themselves well during the Great Recession so that previously shelved projects could be restarted in this strengthening economy.

Those shelved properties often consisted of sites with some form of environmental impact that was deemed too costly for redevelopment.

With a stronger economy and more demand for urban locations, the number of contaminated sites which are being redeveloped has increased. However, requirements for cleanup have not been relaxed.

So what has helped to clean up these difficult sites? One key may be focusing cleanup activities only on portions of identified contaminated soil or groundwater.

For the lucky property owner the extent of contamination is limited to the property boundaries, but in most instances contamination spreads across parcel boundaries, affecting other properties. This level of contamination can be extremely difficult to manage, and may dissuade even the most aggressive prospective purchaser or their lending institution.

Unless the financial backer can be assured that a “No Further Action” letter from the Washington Department of Ecology will be granted for a cleanup, the large-scale contaminated sites are typically too risky to back.

By reducing the level of effort required for cleanup, and thereby reducing the cost, a property within the limits of a large area of contamination could become more attractive for a financial backer. One way to decrease this cost is to pursue “Property-Specific No Further Action” status. 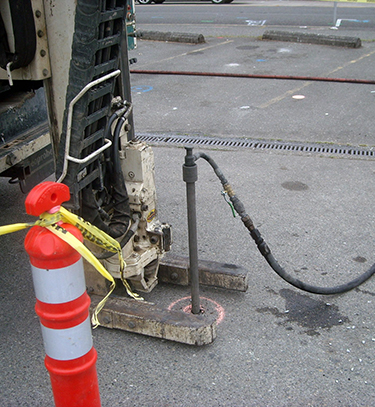 Photo by Lucas Swart/Terracon [enlarge]
In-situ injection is one way to clean up underground contamination.

Most economists agree that the Great Recession started in late 2007 and ended in mid-2009. Within the midst of the recession, Ecology published “Guidelines for Property Cleanups under the Voluntary Cleanup Program.” This July 2008 guideline provides direction for Ecology staff and the public to conduct characterizations and cleanups of contaminated properties with the intent of obtaining a Property-Specific NFA.

The intent of the document was to demonstrate the steps required to achieve a Property-Specific NFA when the cost and time-frame to clean up the entire site was prohibitive and lengthy. At a time when many projects were stalling due to the cost of cleanup, this document clarified the path associated with a more cost-effective approach.

To understand the applicability of a Property-Specific NFA, the regulatory definition of “site” must first be understood. Simply put, the “site” is comprised of all media (e.g., soil and groundwater) that have been impacted with a regulated compound above regulatory action levels, irrespective of property boundaries.

If the site consists of three tax parcels, of which only one is being redeveloped, and access to cleanup of the entire site is cost prohibitive, then a property owner could opt to pursue a Property-Specific NFA. This assumes that the steps taken by the property owner are adhering to the 2008 guidelines and state administrative codes.

With the economic upturn, municipalities have reassessed the potential for redeveloping individual properties, and are making development on these properties easier in an effort to lure developers.

Although urban development within a city core runs the risk of encountering large pockets of contamination, the possibility of obtaining a Property-Specific NFA has significantly reduced the risk associated with investing in individual properties, assuming that the regulatory provisions in the 2008 guidelines are followed.

One such property was recently put up for sale within in a section of Seattle ideal for commercial development. Historically, the property was developed with a small, privately owned automotive repair business that used numerous underground storage tanks. As is usually the case with underground tanks, they leaked, and the impacts to property soil were identified during the recent removal of the tanks.

As is recommended for effective regulatory cleanup, the source of contamination was excavated and approximately 300 tons of contaminated soil was removed. Even though it appeared that contaminant source removal had resulted in the cleanup of the property, confirmation sampling was not performed at the time of removal to demonstrate that all contamination had been removed. In other words, the site had not been defined.

Furthermore, the limits of the remedial excavation were extended to the property boundaries, thereby limiting future sampling to confirm that all property impacts were adequately addressed. As a result, the cleanup of the property could not be confirmed and a Property-Specific NFA was denied pending further investigation (and money).

In a similar situation, a leaking underground tank was identified at a facility that contributed to the contamination of soil and groundwater. The local municipality was responsible for the leaking tank, and therefore was interested in cleaning up the site.

Given this situation and the city’s desire to see this centrally located portion of land redeveloped in a suitable manner, the municipality was more than willing to work with a developer to clean up the property. When presented with the possibility of even a Property-Specific NFA, which would not alleviate the city from the responsibility of cleaning up the entire site, the city was still willing to help with the development of this important downtown property.

A thorough characterization was performed in an effort to determine the extent of contamination in soil or groundwater. As a result, contamination was confirmed to impact the property and numerous other parcels.

The site, defined by Ecology as all areas where contamination is known to exist, was fully characterized; however, it was determined that property soil was not impacted and that the only affected media was contaminated groundwater. To reduce the cleanup time-frame and cost, a property-specific cleanup was selected rather than a complete site cleanup.

Using in-situ injections, a subsurface barrier was created to impede future contamination into the property groundwater, and to comply with a requirement that groundwater not be re-impacted by off-property contamination.

Given that the groundwater impacts were cleaned to concentrations below action levels and that the 2008 guidelines were followed, a Property-Specific NFA was recommended and is pending the results of subsequent periodic monitoring.

By following the Guidelines for Property Cleanups, the owner will be able to receive an NFA for the property and provide his lender assurance that environmental issues have been handled in a cost-effective and timely manner. More importantly, for no additional investment, the owner now has the NFA to provide to future lenders, which can often be more important than securing the financing for the current redevelopment.

Matt Wheaton, LG, EIT, is the environmental department manager in Terracon’s Mountlake Terrace office. Wheaton lives in Lynnwood, where he volunteers on various committees in the city and school district and teaches an after-school science class at his children’s elementary school.