Greenbridge Investment Partners is new to Seattle, but the company founders knew they had found something special when they saw the Seattle Design Center.

The sprawling center is at 5701 Sixth Ave. S. in Georgetown, and it's a hub for commercial and residential furnishings and designers from the Northwest and Canada. It was started in 1973 and expanded in 1983, but the two buildings had seen better days. While the showrooms inside featured the latest looks, the center itself was not well maintained over the years.

Greenbridge bought the 432,000-square-foot complex in late 2014 with the goal of keeping it as a design center.

Sean Hashem, who founded Greenbridge in 2012 with Fareed Kanani, said, “Frankly, people were looking at taking out the design center all together, and even though it was our first deal in Seattle, we felt it would have been detrimental for that area. It became a little more mission-oriented at that point, and we said we want to save the design center.”

Hashem first got interested in buying the design center while he was working with another group to redevelop a similar design hub in Los Angeles called LA Mart. That experience got him interested in finding an opportunity to influence a neighborhood and a regional icon like Seattle Design Center.

The Buzz previously reported that Hashem and Kanani met in 2006 when they were on opposite sides of a real estate deal and liked each other's style. Hashem has a knack for seeing opportunity in overlooked areas, and Kanani has worked with large institutional investors and funds. 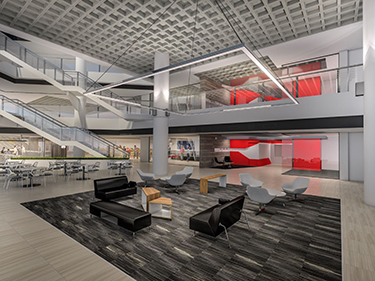 Though Greenbridge is still a small company, it has in-house property managers, accountants, asset managers and construction managers. The two men say they want to focus on projects in areas where they see growth potential — like Georgetown.

Greenbridge expects to spend between $11 million and $15 million on the renovation.

JPC Architects is the designer and Venture General Contracting is the general contractor. Swinerton Builders worked on part of Georgetown Squared.

In the design center, the project team is taking out the canopy entrance, redoing the lobby and adding a glass elevator. Landscaping and LED signage facing Fourth Avenue South are planned to make the space more attractive.

Greenbridge wants to raise the profile of the design center and offer more public events. Kanani said the complex is frequented by long-time patrons, but they want to draw first-time homebuyers and others new to the Seattle area. Renovations and better marketing should let more people know about it, Kanani said.

Greenbridge is working with Skillet to open a restaurant on the design center's ground floor.

Georgetown Squared will have open, airy office spaces as well as a new lobby and common areas, with glass elevators and a gym.

So far, several tenants have signed leases, including Andersen Construction, OpenSquare and Prowess Consulting. Kanani said he is talking to several other tenants that could bring the space to about 50 percent leased.

About 90 percent of the space in the design center building is leased.

There's room for young companies to grow, and rents here are significantly lower than downtown: topping out at about $21 per square foot.

Kanani said Greenbridge expects to finish renovation work by the end of the year.

While Kanani and Hashem are invested in the design center, they are just as passionate about the neighborhood. Part of the reason they kept the design center was because they see it as a vital piece of Georgetown.

“We are pioneering for sure,” Kanani said, “but there are a lot of great things out here given the tiny size of Georgetown.”

Greenbridge is working with the city on a branding and signage campaign to raise Georgetown's profile. Kanani said they were involved with a recent event called Bacon and Bourbon Fest. This fall, the design center will host the Northwest Design Awards.

The neighborhood is changing as more people start working there. Georgetown Squared will be one of the biggest office buildings in the area, and companies like Trupanion are moving to Georgetown and bringing hundreds of employees — and pets — with them.

Greenbridge is looking to do more in Seattle. Hashem said Greenbridge is interested in transactions between $10 million and $100 million. In Seattle, Greenbridge wants to find historic buildings with character and a story.

“We like to say we are old souls in that we buy buildings as old as our grandparents — or older,” Kanani said.

Presidio Residential Capital and Summit Homes of Washington seem to be big fans of Issaquah.

Work will begin this summer and houses could start coming out of the ground by fall. Inneswood should open by spring 2017. The value of the project is expected to be about $11 million.

Inneswood is an extension of another Presidio/Summit project: a $25 million, 20-home community called Pickering Place.