HAL Real Estate has been quiet for a few years, but now the Seattle firm is starting to make some noise.

The 23-year-old company recently was named as the equity partner on a five-story building at 744 N. 34th St. in Fremont that Tableau Software has leased. HAL executives told the Buzz this week they are actively looking to get involved in more real estate projects and deals across all sectors.

The catalyst for this change is the return last fall of Paul Manheim as president.

Manheim said he established HAL Real Estate, and was president and CEO from 2001 to 2005. He remained a director at HAL and oversaw projects in China for HAL's holding company and served on HAL's board of directors until he became president again last September.

Manheim said HAL's decision to be more active now represents a shift in investment philosophy. HAL executives maintain there is no pressure to get money out, but they say they believe in Seattle and don't want to invest only at the bottom of the market.

“There are attractive real estate transactions in all phases of the market,” Manheim said.

Manheim said HAL is working on several deals at the moment but he would not go into specifics.

In addition to a new philosophy, HAL also is building a new team. The office has six employees today but expansion is on the horizon, Manheim said. When the Buzz spoke with HAL this week it was the first day on the job for vice president Jonathan Manheim, who is Paul's son. Jonathan grew up “hearing about real estate across the dinner table,” his father said. Jonathan later studied real estate and development, and spent several years focused on institutional and private equity before working for two years at American Life Inc.

Vice President Keith Maehlum has been with HAL for more than 10 years. He has an architecture background but later transitioned to development, and has worked at local and national firms. 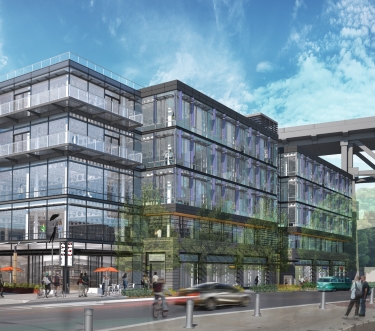 The executives said HAL combines flexibility and major financial resources. Being affiliated with the holding company gives HAL access to significant funding, but the team is small and can make decisions quickly. The deal between HAL and the developers of the Fremont office building came together rapidly. The developers are Mark Grey of Stephen C. Grey & Associates, and Mike Hess and Joanna Hess Callahan of First Western Development Services. Shortly after Manheim returned to HAL as president he got a call from a broker about the deal. It took just one or two meetings and a look at finances before a handshake sealed the deal — just a couple of days after the initial meeting.

Part of HAL's flexibility is its willingness to participate in a lot of different deals. It can be part of a joint venture or do its own thing. It can buy, reposition or build from the ground up. Maehlum said HAL can get involved at any point in the process. HAL came in later on the Fremont project but it could be involved as early as land acquisition or cleanup.

Paul Manheim said HAL wants to be in on the significant decisions to be sure projects not only make sense economically but are beneficial to the region as a whole.

“The important thing for us is to be a responsible participant and not just a bank,” he said. 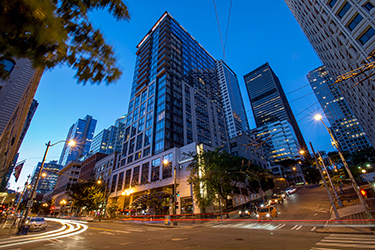 The new owner of Hotel 1000 says it's going to turn a good hotel into a great hotel.

Loews Hotels & Resorts acquired the 10-year-old hotel at 1000 First Ave. from Thayer Lodging Group and Provenance Hotels for $83.5 million. Loews plans to renovate the 120-room hotel and convert it next year to a Loews Regency, the firm's luxury brand.

Jonathan Tisch, chairman of Loews, said Simeone Deary Design Group of Chicago is the architect for the renovation. Tisch said details about the renovation have not been determined but he said that one of the biggest trends in the industry is a greater focus on the lobby and ground floor, particularly the restaurant and bars.

(Editor's note: This story has been changed to correct the spelling of Simeone Deary Design Group.)

“As people are more committed to being on devices, they want to be surrounded by other people,” Tisch said.

Loews has been in expansion mode lately. Since 2012 it has invested more than $1 billion to buy seven hotels — including Hotel 1000 — and build two others. The firm has 23 U.S. hotels today, and according to its website, intends to have 50 by 2020.

Loews has wanted a piece of the Seattle market for several years. Loews' team was looking at other properties and development sites when they heard there might be an off-market opportunity to buy Hotel 1000.

Tisch said the hotel market here has long been under supplied, but several new hotels — and expansion of the Washington State Convention Center — should make Seattle a more attractive location for conventions. The growing office market also drives a lot of demand for business travelers, Tisch said.

Loews is a New York City-based family business that is close to 75 years old. Tisch and his cousins are at the helm today.

Tisch said the hotel industry has gone global and the financial side has become much more sophisticated. Financial institutions, wealth funds, REITs and others are heavily invested in hotels.

But the same things that made hotels great 50 years ago are still relevant today, Tisch said.

“At its core, the hotel business has not changed in decades and decades,” he said. “It's about trying to understand why someone travels in the first place, why they would chose your particular property, and not only meeting their expectations but exceeding their expectations.”