The biggest project this side of Amazon.com continues to make its way through Seattle's permitting process.

Last week, the new Seattle Department of Construction and Inspections issued a determination that the project would have significant environmental impacts. DCI spokesman Bryan Stevens said this is typical for most high-rise projects and can help identify ways to mitigate environmental impacts.

Courtesy Chris Dikeakos Architects [enlarge]
This rendering shows a pair of 41-story towers on one of two blocks Onni Group is developing in South Lake Union. This block is at 1120 Denny.

Next up are a pair of design review recommendation meetings. A meeting about the southern block is set for Feb. 3. No date has been set for the north block meeting, but it's worth noting that past review meetings have considered both blocks together, so that could happen again.

Onni representatives did not return a phone call requesting comment.

Onni still has several approvals to get before it can start including a master use permit, a text amendment from Seattle City Council and building permits, according to environmental documents.

The architect is Chris Dikeakos Architects of Burnaby, B.C. ETA Landscape Architecture is the landscape architect and Glotman Simpson is the structural engineer.

With a project of this scale, it's important to look at it in the context of the current development boom. It remains unclear if the units will be apartments or condos, so we will look at both.

Mike Scott said Onni has not given him a schedule for construction, so those units are not included in his analysis. If the units opened in 2018 — probably the soonest if construction began now — that would increase the number of units expected to open in 2018 by 22 percent.

If the units are condos, that would create a huge spike in the condo supply, which has lagged way behind apartments. A website by Realogics Sotheby's International Realty called No Place Like Own shows only 201 condos are planned for downtown Seattle in 2018. 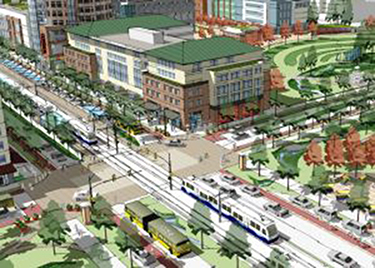 Courtesy city of Bellevue [enlarge]
The Bel-Red/130th Station will be in the center of Northeast 16th Street, and will include parking for about 300 cars.

Lots of real estate pros are watching what happens in the Bel-Red corridor, and now a group of real estate students is about to weigh in with their ideas on what and how to build around light rail stations.

The local NAIOP chapter's 2016 Real Estate Challenge asks teams from three universities to come up with proposals for three parcels near a future Sound Transit light rail station at 130th Ave. N.E. The schools are University of Washington, Portland State University and University of British Columbia.

NAIOP is holding a kick-off event for the challenge on Friday from 10 a.m. to 4:30 p.m. at Bellevue City Hall, 450 110th Ave. N.E. There will be a site tour, and presentations from the city of Bellevue, Sound Transit and Bellevue Councilmember Kevin Wallace.

The student teams' proposals will be presented at NAIOP's breakfast meeting in March.

Two light rail stations are planned to open in the Bel-Red corridor in 2023. Bellevue has spent the last few years working on a plan for developing the 900-acre area. The most high profile project in the neighborhood is the Spring District: a 36-acre new community that could have up to 5.3 million square feet of offices, retail, housing and parks, and cost $2.3 billion. Wright Runstad & Co. and Shorenstein Properties are the developers.

The student proposals should reflect the city's vision for the Bel-Red corridor, and open before light rail service begins in 2023.

Written proposals will be evaluated by experts in design, zoning, construction, capital markets and development strategies. The student teams will then give oral presentations to a panel of developers.