I am not an economist so my predictions and prognostications are established purely by my 25 years of experience within the hotel real estate industry. Unfortunately, I’ve never been through a market quite like what we are facing this year and beyond.

Last year was a milestone in our country’s history and the world in-kind. I doubt anyone truly knows how this story unfolds, or where we end up four years from now. There are too many uncertainties, suspicions and doubts for what lies ahead. But one thing is certain: there will be significant changes not only here in the United States, but around the world and most definitely in the world of hospitality.

As my focus has always been in the hotel space, I find myself looking at real estate as well as the entities involved with hotels: management companies, owners, unions, brands, and both domestic and international travelers. One item of certainty is that the international traveler is growing more skeptical of coming to the U.S., whether for business or leisure.

We are already experiencing a backlash from inbound guests due to a stronger dollar, coupled with some of the recent political turmoil, and there is a making of serious headwinds for international inbound travelers. Add to this mix, a reactionary and restrictive Chinese government, continued terrorist incidents and a faltering world view of the U.S., and a soft landing in the Seattle hotel space could be compromised.

I would not want to predict that the sky is falling, as we have seen quite the opposite around the world. The U.K. economy has surged since the vote for Brexit despite a higher level of uncertainty. U.S. financial markets have continued to reach new highs and the European Union continues its fiscal easing and highly expansionary monetary programs.

Real wage growth continues to take place in the U.S., as does a strong housing market and low unemployment.

Spreads in treasuries and the interest rate bumps have all been baked into the current economic outlook with mostly positive results. For now, money continues to flow.

Mainland Chinese are still the fastest growing segment of international travelers regardless of government restrictions.

These are all very positive data points. There are risks to be certain, but we are moving forward from a position of strength regardless of growing headwinds.

Today, Seattle has over 60 cranes working to transform our skyline to rival those of San Francisco, Boston, Chicago and New York. We are becoming a world-class economic powerhouse supported by renowned businesses such as Alphabet, Lyft, Fred Hutch, Red-Fin, Expedia, the Gates Foundation and many more.

Each of these entities and related real estate demand create far-reaching opportunities. This growth spans more than 50,000 multifamily units built or in development, thousands of high-paying computer engineering jobs, and millions of square feet of office space under construction in the central business district — not to mention our tendency to announce a new hotel project on a weekly basis.

Simply keeping track of all the new hotels and mixed-use projects is a full-time job. On the books, Seattle shows nine hotels under construction or 2,789 rooms representing just over 20 percent growth from the current supply of 13,684 rooms. The more ominous issue is the additional 24 hotel projects CBRE is tracking that are in various stages of planning, with the potential of 3,900 additional rooms to the CBD. 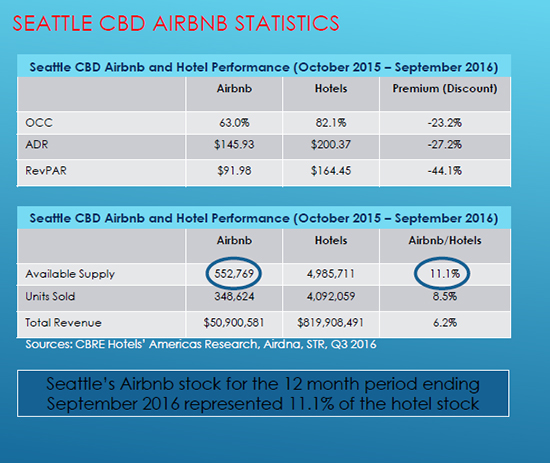 Compared to multifamily development, these numbers seem irrelevant, but in total, we could experience an unprecedented growth in hotel projects of over 40 percent through 2020. Not all of these projects will come to fruition, but regardless there will be a significant increase of new hotel supply in Seattle over the next few years.

The primary economic theory of supply versus demand can create substantial risk, but those first to market will enjoy the city-wide 2016 occupancy approaching 80 percent and rate growth continuing its upward momentum like our Seattle skyline.

However, risks and headwinds beyond supply issues do remain broad and ever changing. Technology, such as Airbnb, has been both a source of growth as well as a disruptor in the hotel business.

Airbnb today has over 2.5 million listings in 34,000 cities and 91 countries. In the greater Seattle area, Airbnb accounts for 11.1 percent of overall CBD hotel stock.

Authenticity in travel and delivery of services remains highly desirable by guests, creating greater competition for traditional brands while growing fresh, boutique and independent led concepts in the hotel space. These disruptors will become more mainstream as we have seen recently with the co-branding of Delta and Airbnb, and with Marriott/Starwood looking closely at co-habitation initiatives.

As Airbnb stabilizes, expands and becomes more competitive, there will be other innovators behind it creating more disruption in our industry.

Seattle is also fast becoming a flash point for far-reaching and potentially damaging union and legislative activity unprecedented in recent times. Ownership in hotel real estate in Seattle faces continued pressure from activists cloaking multiple initiatives under the guise of employee safety and security without serious thought as to the real impact on the economics, implementation and viability.

Hotel real estate owners understand the need and desire for living wages, safety and security along with insurance, family leave and all the critical issues facing their team members and families. Many tend to forget that the hospitality and tourism industry is the economic, cultural and job vehicle that much of the city and state have relied on for years.

Forcing owners to adhere to arbitrary, inefficient and economically unviable legislation will only move our industry away from the growth vehicle it has been and make investment into this space more difficult, unpredictable and less viable by institutional investors going forward.

Hotel investing by no means is a stable process, but many institutional investors, especially those off-shore, remain underweight in hotel real estate by most standards. This has been recently illustrated by the massive hotel merger-and-acquisition deals by mainland Chinese conglomerates and European pension funds, and continued investment abroad from EMEA and UAE countries.

Bold economic proposals by the current administration should help continue institutional investments from both domestic and international sources. Although the picture is by no means clear, hotel real estate, especially in the U.S., tends to remain a safe-harbor for many looking for diversification and stability.

We see issues such as security and travel bans impacting world travel both at home and abroad, as well as the perception of how the U.S. will treat international travelers. For the greater Seattle hotel investment community, we expect stable growth going forward with a wary eye on those ever increasing headwinds.