The downtown apartment building boom is moving full steam ahead, and Seattle is about to get its next wave of new 40-story luxury towers.

There are more high-rise apartments under construction in downtown Seattle than the last 10 years combined. As these towers are reaching ever higher, the rents are also continuing to rise. Renters can anticipate that many of these new units, especially urban one-bedroom units and studios, will be topping $4 per square foot monthly. With floor-to-ceiling glass, staggering views, premium amenities and top-of-the-line finishes, Seattle’s new high-rise are redefining the market’s expectations for luxury rental product.

At the same time, the increased competition for the highly sought after “luxury renter” is also helping reshape the approach to mid-rise apartments. A growing number of developers are realizing that, with strategic unit upgrades, dynamic amenities and high-quality finishes, new wood-frame mid-rise apartments can achieve rents that are very close to comparable concrete high-rise product.

Close-in neighborhoods such as Capitol Hill, South Lake Union and Ballard are proving a highly desirable alternative to downtown high-rises, and it seems that tenants are willing to pay a premium for some of these newest mid-rises.

Stepping up to compete 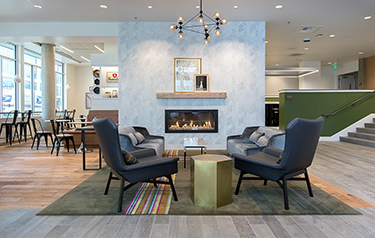 Photo by Daniel Sheehan [enlarge]
The lobby of Modera has a marble mosaic fireplace and a co-work cafe. 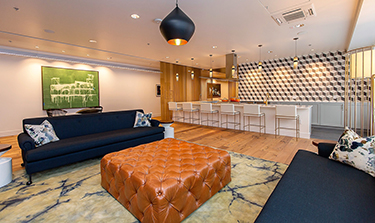 Photo by Daniel Sheehan [enlarge]
The lounge at Modera has a luxurious feel inspired by private dining clubs.

Just a few years ago, the benchmark for luxury multifamily rentals was $3 a square foot, which was established by several high-rises built after the recession. The Martin, which opened in 2013, was one of the first new towers to push past the $3 mark. With gas appliances, custom closets and glass-tiled backsplashes, the Martin helped raise the bar for finishes and usher in the new era for luxury high-rise living.

As the number of new high-rises multiplies, we are seeing a growing trend of mid-rise apartments that are stepping up in terms of design and amenities in order to maintain their appeal to the coveted luxury renter.

So, what’s going on here? How can 65-foot-tall, wood-frame product compete so closely with concrete construction, floor-to-ceiling glass and unobstructed views of Puget Sound?

One answer may be that developers are really stepping up the level of luxury in mid-rises to appeal to higher end renters. While there has been an influx over the past few years of apartments that have had a more raw or industrial vibe, we are now seeing a new generation of mid-rises that boldly incorporate the luxurious finishes, appliances and amenities traditionally found in high-rises.

In addition, as downtown continues to densify with 40-story towers as the new standard, there seems to be a growing interest in the more “human-scaled” low- and mid-rise neighborhoods that include Capitol Hill, Ballard and West Seattle. These neighborhoods, which are typically centered on eclectic commercial districts, retain a special character, an “approachable” scale, and an easily identifiable sense of place. These factors make new apartments in these neighborhoods attractive to all segments of the rental market.

Six miles north of downtown Seattle, a new mixed-use project is currently achieving some of the highest rents in the city. The Commons at Ballard is an 85-unit luxury mid-rise apartment in the heart of Ballard. The boutique-scaled project is already 70 percent leased, and it is achieving overall asking rents in mid $3 range. Rents vary from $3.30 a square foot for two-bedroom units to over $4.50 a square foot for studios and urban one-bedroom units.

What is the secret of The Commons at Ballard? It may be its simultaneous focus on luxury and sustainability. Developed by Henbart LLC and designed by Studio Meng Strazzara architects, the project is slated to become Ballard’s first LEED platinum community. Sustainable elements include green roofs, electric charging stations and the incorporation of recycled materials. 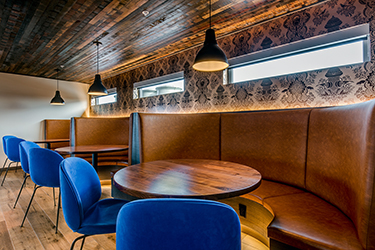 Photo by Brent Smith [enlarge]
The skylounge at The Commons has a copper bar with liquor lockers, banquette seating and a screening room.

“This was our first mixed-use community so we wanted to do something special,” Henbart President Mark Craig says. “The Commons at Ballard is a catalyst for us in programming sustainability and connectivity in commercial development. We knew we were competing with much larger projects in both Ballard and downtown, so we focused on developing a unique property in terms of uses, quality and amenities.”

The interiors, designed by Robin Chell Design, reflect a luxurious step up from typical mid-rise product. Kitchens have Bosch appliances, including gas ranges. The units are designed with ample storage, including custom closets, pantries and built-in wall systems from California Closets. Two-bedroom units have gas fireplaces, and most units have balconies. Bathrooms have tiled shower surrounds and illuminated mirrors. Additionally, all units have air conditioning — a rarity in the mid-rise market.

The Commons at Ballard also features a large multipurpose skylounge, two rooftop decks and a pet area. The skylounge has a large kitchen and bar with liquor storage lockers for residents, as well as banquette style seating and an indoor/outdoor fireplace. Velvet drapes frame the entrance to the separate media room, where gamers and movie lovers can host private events. The building also has secured, illuminated bike storage rooms on each residential level. 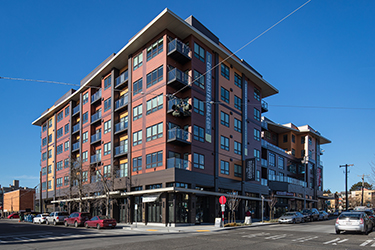 The Commons at Ballard is reportedly attracting tenants from several relatively new downtown high-rises. The tenants are drawn to the high-quality finishes, boutique scale and on-site amenities, as well as to the building’s location. A Bartell Drugs store anchors the ground floor retail, and will soon be joined by a full-service, farm-to-table restaurant.

Modera South Lake Union is a new 294-unit mid-rise on Dexter Avenue North. Developed by Mill Creek Residential and designed by Fish Mackay Architects, the project is a great example of how developers are incorporating higher-end finishes and abundant amenities to compete with other mid-rises and the growing high-rise market.

With over 7,000 square feet of amenities, Modera has multiple lounge and co-work areas, including a cafe-style work space fronting Dexter. The building also has a dining lounge, sports-themed rec-room and a luxuriously appointed screening room. In addition, there is a large fitness center with a separate multipurpose yoga and TRX studio. 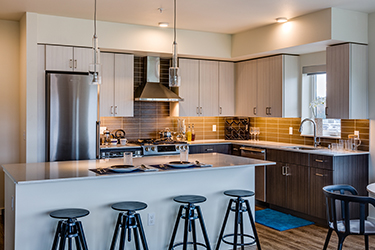 When Robin Chell Design was brought on board to design the interiors for Modera, we knew the building was intended to be luxurious, yet approachable. Playful ceramic tiles, marble and stone mosaics, unique wall coverings and modern lighting fixtures were used to define the common areas and the overall project brand. Throughout the building, there are design details that are distinctly Northwest, including custom plaid area rugs and pillows, locally inspired art and the extensive use of rustic wood flooring.

The amenities were designed and programmed to be multipurpose, flexible spaces that optimize social opportunities like gaming and cooking, while at the same time providing more intimate spaces for small gathering or working. The resident dining lounge, inspired by private dining clubs, has a rich combination of custom fabrics and textiles, with a demonstration kitchen and fireplace.

The residential units have gas appliances, quartz countertops and tile tub surrounds. Modera is also one of the few mid-rises in the SLU market that has air conditioning, a preferred option for the luxury market. The overall result is a unique, welcoming and luxurious mid-rise community that competes with nearby high-rises in terms design quality, finishes and amenities.

It’s an exciting time in the Seattle market with regard to the design and programming of new multifamily product. Though new high-rise apartments are raising the bar in terms of finishes, amenities and achievable rents, mid-rises are stepping up their game and are not too far behind. The result is greater distribution of luxury apartments citywide, where top-of—the—line rents can be found from high-rises in Belltown to mid-rises in Ballard.