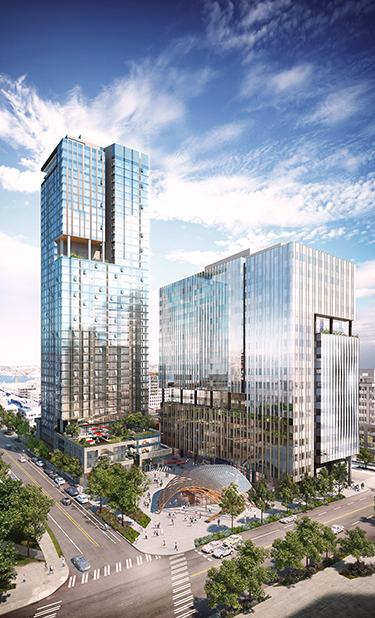 Rendering from Vulcan Real Estate [enlarge]
The 111 Westlake office tower (on the right) will have 400,000 square feet.

Ada M. Healey, vice president of Vulcan Real Estate, answered questions from the DJC about Vulcan’s plans, and trends and issues in the industry.

Q: Where do you expect to see the most growth in real estate development, geographically or in a particular sector, in the Puget Sound region?

A: Job growth continues to surprise to the upside in Seattle and positive net immigration is not showing signs of slowing down. This will continue to drive development in close-in urban areas in downtown Seattle and Bellevue. But as the realities of expanded light rail become more tangible I expect we will see increased development along transit lines — areas like the U District, Northgate and parts of the Eastside outside of the Bellevue CBD.

Q: Is it difficult for new high-rise office projects to be successful in Seattle, given the penchant for low- and mid-rise office campuses (with the exception of Amazon)?

A: In recent years much of the office demand has come from tech firms that have been drawn to mid-rise buildings due to their larger floorplates, which are thought to be more conducive to sparking collaboration and creativity.

Amazon has shown that they can make the high-rise model work (in Denny Triangle) so I don’t think high-rises are off limits to the tech sector. However tech firms tend to prefer single tenant occupancy and high-rises are generally too large for most single users. High-rises can be successful but spec high-rise office buildings are most likely to attract more traditional tenants — law firms, financial institutions and the like.

Q: Will Vulcan invest more in the Central District and Yesler Terrace, and why is it not investing in Seattle’s downtown core/financial district?

A: Vulcan is actively seeking new investment opportunities throughout the Puget Sound region. We typically focus on ground-up development and/or value-add opportunities, which are more likely to be found in areas outside the downtown core/financial district. In addition to our plans for 23rd & Jackson in the Central Area, we have three residential projects at Yesler — the Batik Apartments are under construction and we will break ground on the second project this summer. At completion, our three projects at Yesler will include more than 650 units of market rate and affordable housing.

Q: What is Seattle doing right — and wrong — in creating more affordable housing, and will that approach provide enough housing affordable for workers who are not low-income, but who are not making Amazon-level wages?

A: Along with our partners at the Coalition for Housing Solutions and Seattle for Everyone, we supported the mayor’s landmark “Grand Bargain” on affordable housing. It is important that there is a balanced approach that meets the objectives of many stakeholders — labor and business, for-profit developers and low-income housing providers, urbanists and social justice advocates, as well as community members and people who require more affordable housing options.

For many years the only tool that has been available for private developers like Vulcan is the Multifamily Tax Exemption program. We have used that program widely and Vulcan has developed more affordable housing in South Lake Union than any other private developer. Sixteen percent of our rental portfolio (299 units) is affordable to households earning 65 percent to 85 percent of area median income — that includes teachers, police officers, firefighters and dual wage earners with jobs like hotel housekeeper, golf course groundskeeper, restaurant worker, hairdresser and other minimum wage jobs.

I think expanding the number of tools available for developers will be the most effective at producing more affordable housing.

Q: Is the market deep enough to sustain the number of high-rise apartment projects planned or being built in Seattle?

A lot of tech workers are millennials who place high value on access to restaurants, retail and public transit and they are creating what appears to be insatiable demand. But the oldest millennials are in their mid-30s and may start looking at the advantages of suburbs (like larger homes) for raising families. I think the millennial suburban flight may be balanced by increased demand from empty nesters (boomers) moving back to in-city apartments.

Q: What are the biggest challenges facing real estate in the region?