Avalara moved into its namesake building last month, and next Wednesday Embassy Suites will open in the same new development at 255 S. King St. The towers, which share a podium, were designed by Freiheit Architecture (formerly Freiheit & Ho Architects) and built by SoDo Builders. American Life is the owner and developer.

The 23-story north tower is the 282-room Embassy Suites. The mid-tier Hilton brand is about 35 years old, and has generally focused on suburban markets — and included their signature atriums. Its three prior local locations are in SeaTac, Bellevue and Lynnwood. The brand actually originated with Holiday Inn; it was acquired by Hilton in 1999; and private equity firm Blackstone finally swallowed Hilton in 2007.

Image by Studio 216, courtesy Embassy Suites [enlarge]
Avalara Hawk Tower and Embassy Suites are shown here in the center. They share a podium in the new development at 255 S. King St.

But, as Embassy Suites' Wendy LeBlanc said during a recent media tour, “We're the flagship on the West Coast.” Hilton says it wants to take the brand in a more of an urban direction.

The location speaks to that. It's directly served by light rail from the airport. King Street Station and the transit tunnel are mere steps away — as is the streetcar on South Jackson Street.

Also, Embassy Suites is embracing tech. Whether you want one or not, there's an Amazon Alexa in every room. The hotel also offers keyless mobile entry with your phone, mobile check-in and check-out, plus other gadget-friendly features.

Structured parking within the podium garage will be shared by hotel guests, office workers and the public. It has about 343 spaces, which will surely fill up on game days. An Embassy Suites rep says there's also some underground parking for the valet service.

The hotel ballroom is on the south side of the building, below the office tower, with views of CenturyLink Field. It measures 7,433 square feet and can accommodate 545 seated guests. It also opens onto a large terrace on the southeast corner of the building — also with fine views. Dubbed “the wedding deck,” it can accommodate 200 seated guests. During nice weather, a sliding window wall opens to join the two spaces.

Also in the podium, a large fitness room and indoor pool are available to both guests and office workers.

The office tower has a roof deck with commanding views. By contrast, there's no roof deck on the hotel tower, but the large 23rd-floor suites all have decks. Their views to the west, north and east are unobstructed — looking out over low-rise Pioneer Square. And some even have keyhole views south to SoDo and Mount Rainier.

The hotel cafeteria is on the second floor, while the lobby-level Zephyr Bar — with design cues from the prewar era of rail travel — faces King Street Station. Over the lobby desk is a large mural, “And the Palindrome Found Its Reflection,” that was painted on site by local artist David Hytone.

Functioning as the hotel's de facto restaurant and 24-7 room service provider is the Moscatel family's 10,500-square-foot 13 Coins, which opened last month after 50 years in South Lake Union near The Seattle Times. The new bilevel restaurant can accommodate about 120 patrons, plus more on the patio. The Lower Quarters is a banquet hall below grade that can hold about 175 people. (The 13 Coins' old site, at 121 Boren Ave. N., is being sold by H5 Capital, along with permits and plans for a 41-story apartment tower.) 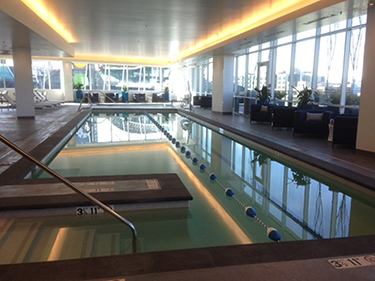 Photo by Brian Miller [enlarge]
In the podium is a large fitness room and an indoor pool, available to both hotel guests and office tower tenants.

The six-story atrium has a water-wall feature but no skylight above. There are three main entrances to the building. It's possible for the public to walk west from King Street Station directly through the atrium to Second Avenue South, aka Stadium Place South, where the giant metal hawk sculpture awaits with talons poised.

American Life is apparently leasing the remaining ground-floor commercial space, but didn't respond to DJC queries. One large space faces west, and is reserved for a non-restaurant tenant, according to Hilton. On the southwest corner are some smaller bays with rollup doors — suitable for food vendors serving hungry football fans.

Total project size for the hotel and offices, including the parking, is about 680,777 square feet. Together, they represent phase two of Stadium Place, though the two blocks have different parents.

The west block of Stadium Place, with apartments and retail, was completed in 2014 by Daniels Real Estate and financial partner R.D. Merrill Co. ZGF Architects and Ankrom Moisan Architects designed the Nolo and Wave apartments (with 492 total units), and JTM Construction was the general contractor. Daniels sold the 1.5-acre east block in 2013 to American Life for $18 million.

The entire two-block project was originally called the North Lot when proposed circa 2006. Daniels and Merrill paid King County $10 million for all 3.85 acres in 2011. Construction began the following year.

In that sense, the Embassy Suites opening and Avalara's move from Bainbridge Island (and other locations) would seem to close the book on Stadium Place.

But look south, and what do you see? Not the stadium; look closer. There's still a sea of parking lots — call it the South North Lot, roughly bounded by South Weller and Lane streets, if you mentally extend the street grid across the railroad tracks to Occidental Avenue South.

And that flat, featureless expanse is owned by the Washington State Public Stadium Authority, on land acquired 18 years ago from King County. (The stadium was built between 2000-2002.)

The South North Lot has about four acres. The state PSA's 2012 concept study basically reserved it for future expansion of the proposed Stadium District. Reading between the lines, that might've meant a new basketball arena — an option that the KeyArena makeover likely now removes.

However, the Stadium District is not included in the latest draft of the Seattle 2035 Comprehensive Plan. And the PSA couldn’t be reached for comment about its plans for the South North Lot—which is surely the next big development prize in the neighborhood. 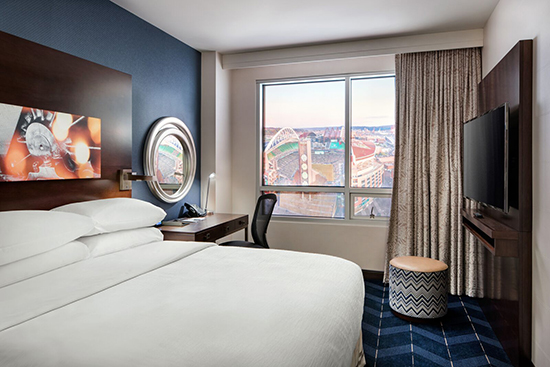 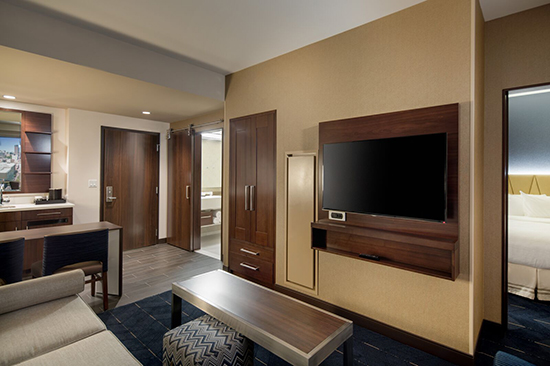 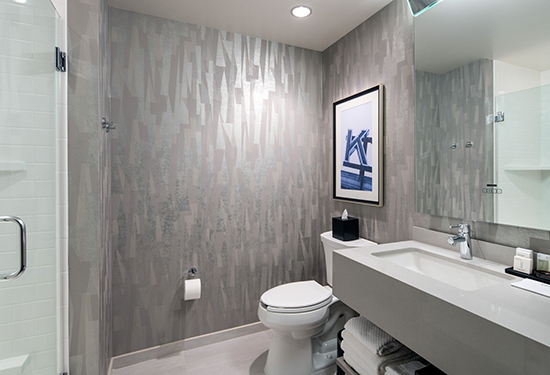