Robert Hardy has done a lot of work in Seattle-area real estate.

Hardy says he has flipped or built more than 700 houses and condos, redeveloped retail centers and constructed apartment complexes.

But Hardy recently stepped into new territory. An entity related to his company, Hardy Development Cos., pulled off a complex land transaction, buying 10 parcels on the block bounded by 12th and 14th avenues, East Fir and Spruce streets on First Hill. The owner was the Archdiocese of Seattle and the price was $7.1 million.

Hardy has two other parcels under contract on the block just south of this one, and options to buy a few more nearby.

Hardy said he envisions three phases of new construction in the area with a mix of uses, but so far he is only talking about one project: a six-story 106-unit apartment building at the southeast corner of 12th and Spruce. Hardy said he wants to start construction next summer or early that winter.

Hardy hasn't started permitting because he wanted to make sure he could get the complicated land deal done first.

The only thing Hardy would say about the other development phases in what he is calling First Central Station is that he wants to build more than just apartments.

He sees the location as the big draw. Hardy said he worked on a nearby project called Pointe at First Hill and took a liking to the area, which will be served by the future First Hill Streetcar line and is within blocks of the huge Yesler Terrace redevelopment. 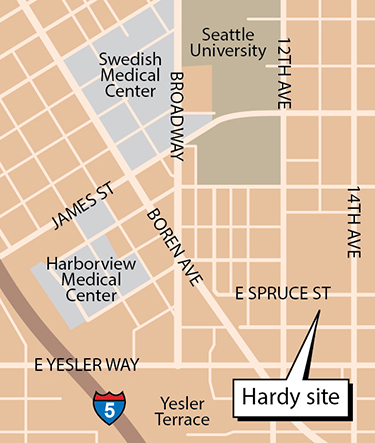 An entity related to Hardy Development Cos. bought 10 parcels on the block bounded by 12th and 14th avenues, East Fir and Spruce streets from the Archdiocese of Seattle for $7.1 million and wants to buy more nearby.

Hardy said B9 Architects of Seattle will “quarterback” the design team. Malsam Tsang is the structural engineer, and PanGeo is geo-technical engineer. No general contractor has been selected.

Hardy is looking at several ways to finance First Central Station. He said firms have approached him about joint ventures if they end up with an ownership stake in at least one of the buildings. Hardy has also spoken with brokers about other means of financing like the federal EB-5 program, which allows foreign nationals to become eligible for a green card in exchange for investing $500,000 or $1 million in qualifying projects. Hardy said financing should be arranged in the next four to five months.

Hardy said First Central Station is a big deal for him and his team.

“We have projects all over town, but this is our baby,” he said.

Hardy has come a long way since the first house he rehabbed in 1989. He started in the mid 1980s with business partner D. Michael Tompkins. Before getting into real estate, the two men created a salsa business. They sold the salsa like a kit, with a can of tomato sauce and a can of diced tomatoes for people to mix at home. Hardy said at one point their product was distributed in 45 states, but he said the grocery game was very political and took too much money to succeed.

Hardy's father was a subcontractor who owned some rental houses, so Hardy fixed up a few of them to learn the basics. From there he built some new houses and condos before getting into more extensive projects, first in Snohomish County and later in Seattle neighborhoods.

Though he has been in the business for 25 years, First Central Station will be Hardy's biggest project. And he still has his long-time partner Tompkins by his side.

Shipping container construction has become sort of a fad in the Northwest, but it also has some fans in the Boston suburb of Somerville, Massachusetts.

Federal Realty Investment Trust, a developer, and a shipping container design firm called Boxman Studios of Charlotte, North Carolina, are planning to open a dining and retail space made from four modified 20-foot containers in an area of Somerville called Assembly Row.

Somerville Brewing Co. will anchor the shipping container space with a new tap room in two containers and a 60-seat beer garden.

The other two containers will house retail, with steel doors and eight-foot hinged store windows that are easy to open.