Bart Brynestad said he was “elated and extremely excited” when he got news Wednesday that his firm, Panattoni Development, was picked by the U.S. General Services Administration to build the regional office for the Federal Aviation Administration.

Getting the FAA lease for a 300,000-square-foot building in the 87-acre Des Moines Creek Business Park is a real coup for the Newport Beach, California-based company, even though Panattoni was already one of this region's most active industrial developers, with more than 3.5 million square feet of space in the works or recently completed.

The Des Moines Creek project is set to be built in three phases. Phase one is under construction now, with three buildings totaling 535,000 square feet that will open in December. Brynestad said he is negotiating three leases for the space, but could not name the tenants.

The second phase is two buildings that will start next year, and be similar in size to phase one. 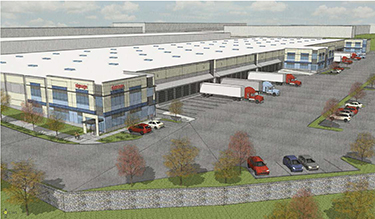 Courtesy CollinsWoerman [enlarge]
The first phase of Des Moines Creek Business Park is under construction. The second phase could start next year, and the third phase will be a 300,000-square-foot office building for the FAA.

The FAA building was going to be the third phase. It will be office space, and the other phases will be more industrial.

Brynestad said Panattoni has plenty of experience doing office projects, but has mostly focused on industrial here because the market has been so hot.

CollinsWoerman is the architect for Des Moines Creek Business Park. Sierra Construction is the general contractor for the overall project, and Abbott Construction will build the FAA building, starting work early next year.

Des Moines Creek Business Park is designed for big tenants like FAA as well as smaller ones.

Thad Mallory of Kidder Mathews is a leasing broker for Des Moines Creek. He said a lot of new buildings are chasing big tenants, like those looking for 250,000 square feet or more. But there aren't many tenants that size, Mallory said. Most industrial leases are for less than 100,000 square feet.

“We wanted to capitalize on the opportunity in the market to lease it up and get high rates by targeting where deals are actually getting done,” he said.

Panattoni doesn't just target one type of tenant or one part of the region. It has projects in smaller industrial markets like Everett and Snoqualmie as well as the traditional industrial hotbeds of South Seattle, Auburn, Sumner and Fife. The developer has leased space to manufacturers, aerospace companies, watersport companies, food distributors and others. 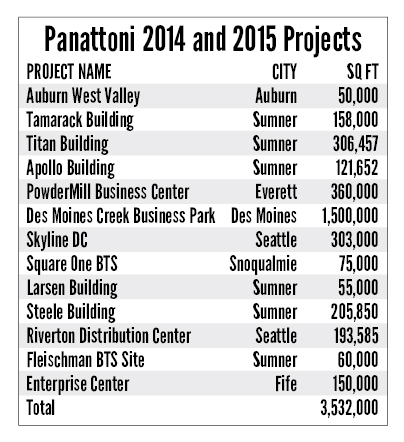 Why is Panattoni building so much, so quickly? The answer is simple, Brynestad said: demand.

“We are providers of real estate, and I don't think we create demand,” Brynestad said. “We just try to meet demand that is out there.”

Several of the company's projects have landed big leases during construction or soon after opening.

Panattoni bought it about a year ago. Brynestad said when he first saw the space it looked like a tornado had just swept through, with office supplies, chairs and other items scattered throughout. But no liquor, Brynestad added, with a hint of disappointment.

Panattoni leased 75,000 square feet in the building to CleanScapes for a recycling plant, and Boeing took another 115,000. Panattoni is finishing a 111,550-square-foot addition and leased it to DGC One, a marketing firm that has done campaigns for Seattle Seahawks. DCG One moved in this month.

“It's a beautiful building to me, regardless of what it looked like,” Brynestad said.

Riverton Distribution Center, another South Seattle project, was also leased before it was finished. Food Lifeline took the entire 193,585-square-foot, two-building complex. Brynestad said Food Lifeline will occupy one building and sublease the other for now, saving space for future expansion.

Brynestad said right now Seattle and the north end of Kent Valley are the hottest industrial markets. If you can find affordable land in South Seattle, Brynestad said, your project will be leased up before construction is done.

Panattoni has six projects in Sumner, and Brynestad said he wants to see how leasing goes before starting more.

Despite all the new space in Pierce County and the south end of Kent Valley, Brynestad said he could do more if he wanted because so many investors want to get into industrial property here.

“It seems to be an almost insatiable supply of capital,” Brynestad said. “If I wanted to I could probably do twice as much, and find debt and equity to do it, but it wouldn't be prudent.”

Panattoni has also been one of the biggest industrial developers in Everett. The company has built 12 buildings there over the years, with a total of 1.5 million square feet. The first phase of Powdermill Business Center — two buildings, 227,000 square feet — is almost done. So far Panattoni has leased about 46,000 square feet to the aerospace company HDI Landing Gear, and a global food company called Gruma that makes corn and flour tortillas.

Everett's industrial market is much smaller than the Kent Valley's, Brynestad said, with about 30 million square feet versus 200 million square feet. There isn't as much demand in Everett as in the Kent Valley or Pierce County, but Panattoni also doesn't have a lot of competition there. “We're seeing good activity up there, not as much competition, and a lot of aerospace companies want to be near Boeing.”

There's one type of company you won't see on Panattoni's tenant roster: marijuana growers. Brynestad said he would happily lease space to marijuana growers — if he could find lenders. Many of his projects also have investment partners, and those companies don't want their investors to read that they are getting into marijuana.

Mallory, the Kidder Mathews broker, said the local industrial market is as hot as its ever been. Constraints on land keep the vacancy low, and investors and developers want to be here.

The Kidder Mathews report says the vacancy dropped to 5 percent at the end of the first quarter, and is expected to go even lower with several big spaces set for occupancy later this year.

Panattoni is an out-of-state developer but it has a long history in the Seattle area, Mallory said. Brynestad and his team have boots on the ground at all times, Mallory said, so they understand what's happening in a market that is becoming increasingly dominated by national and international companies.

After the recession hit, Panattoni stayed here because the company believes in Seattle.

“(Brynestad) got in before a lot of people were willing to consider development again,” Mallory said. “He understood our region and economy was going to bounce back.”