On the Block: Interbay: From swamps to microbrews

Last month I went on a bus and walking tour conducted by the Urban Land Institute, called “Interbay at the Crossroads.” The area is a patchwork of industrial zoning, government-held land, BNSF tracks and random residential properties, and has always fascinated me.

Once a swamp fronting on a deep-water moorage (now Smith Cove), the area was variously called Boulevard and Finn Town during pioneer days.

But early settler and landowner Dr. Henry A. Smith (1830-1915) guessed correctly about his initial 160-acre claim (later expanded to 1,000 acres): It became the railroads' preferred path north from the city, once trestles and pilings were pounded into the mud.

First the Seattle, Lakeshore & Eastern Railway came calling, and then the Great Northern Railway. Smith sold off most of his land. The swamp was filled and “made land” created, much like the Duwamish tidelands and Seattle waterfront. 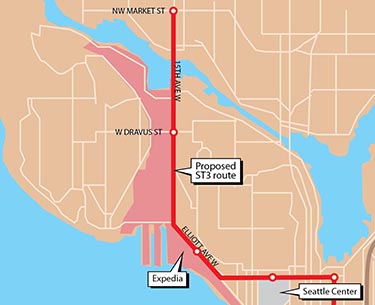 For industrial users, Interbay is working just fine the way it is. But with 4,500 new workers at the Expedia campus and a proposed light rail route under ST3 (shown here in red), the pressure for new development is mounting.

Seattle's multiple regrades and digging of the Ship Canal contributed more fill dirt to Interbay, which now counts the city, state, Port of Seattle, and BNSF (successor to the Great Northern and other lines) as major landowners.

Most of the latter parties are determined to protect Interbay's industrial zoning and prevent the eager tide of new apartment dwellers. I have a theory that every time a new transit measure is considered, the Battle of Interbay gets fought anew.

Interbay was last rezoned in 2008, after a fraught four-year process that overlapped with the proposed monorail line to Ballard (rejected by voters in 2005). The rezone resulted in one of the projects we visited on the ULI tour: TRF Pacific's retail complex at 2001 15th Ave. W., anchored by Whole Foods.

Next door, we also visited Goodman Real Estate's three-year-old Interbay Work Lofts, where tenants now include Compton Design, BiteSquad, a bridal salon, a yoga studio and various small businesses including one, we were told, started by scientists from Amgen, which closed its Seattle operations last year. (More on that below.)

Limited multifamily development was also allowed in the 2008 upzone (mainly around West Dravus Street), though the recession immediately dampened such activity.

Metro's RapidRide D Line began service in 2012, with several stops along 15th Avenue West. And — wouldn't you know it? — there was a fresh demand for more housing in Interbay, immediately met with push-back from industrial interests. Meetings were held and recommendations made in 2013. A 2015 draft report — basically, preserve the status quo with no new housing — was just incorporated into the Seattle 2035 comprehensive plan signed by Mayor Ed Murray.

Yet housing has come, if slowly, with developments like Unico Properties' 236-unit Slate Apartments & Lofts, and Goodman Real Estate's 117-unit Flats at Interbay (completed in 2013 and 2015, respectively). Just north, Lennar Multifamily Communities is underway on the 226-unit Axle, set for completion in early 2018. Two smaller projects nearby would add another 97 units.

All are walkable to the QFC, D Line, various shops along Dravus and, yes, Interbay Golf Center.

New investment, if not a population surge, is certainly coming to Interbay and environs. The ULI tour made a stop at the 40-acre former Amgen-Immunex campus where Expedia is preparing to move in 2019, and add space in later phases.

Originally designed by Koetter Kim & Associates, with interiors by NBBJ, the campus now has a sad and abandoned quality, like the set for a zombie movie. There's even a forlorn Chihuly sculpture affixed to one wall, and dumpsters in the courtyards.

So how will these 4,500 people get to work? Nagle cited free Orca cards for all, reducing single-occupancy-vehicle commuting, the waterfront bike path and a planned light-rail stop at Smith Cove. He added, “We're very much in favor of Sound Transit 3,” which would connect Ballard to downtown via Interbay.

Unmentioned but complementary to Expedia's many travel businesses are those giant cruise ships at the Port of Seattle's Terminal 91 in Smith Cove. There's even a new AAA Travel Store that just opened nearby on 15th, another reminder of tourist dollars at work.

Those of us on the ULI bus also visited Fishermen's Terminal, the Port's oldest facility (established in 1914), at the north end of Interbay. Home to the North Pacific fishing fleet, Salmon Bay was — before the Ship Canal and locks — salt water, not fresh. Now it's a place to shed salt-water barnacles from your hull — another reminder of how Interbay's geography was so profoundly reshaped for commerce.

We also visited the construction site of r&d Interbay, a light-industrial building being built by Freehold Group and leased by CBRE. Reiterating a common refrain heard on the ULI tour, John Gaines of Freehold said, “We probably won't see much rezoning going on.” His firm has bought, improved and built industrial structures in Interbay, where the vacancy rate is just one or two percent, Gaines said. For that reason, even a relatively small 27,000-square-foot project should prove profitable.

From Gaines' perspective, shared by most others on the tour, Interbay is working just fine as it is.

As if to prove the point, the ULI tour finished at Holy Mountain Brewing Co., at 1421 Elliott Ave. W. The 10,000-square-foot business began brewing in 2014 and opened its taproom to customers in January of 2015. The attractive, white-walled taproom faces the railroad tracks, but Holy Mountain depends on the industrial capacity up front, where trucks can bring in hops and yeast — and later pick up kegs of beer for delivery.

So, I asked Holy Mountain co-owner Mike Murphy, why Interbay?

“We really liked how central it was,” he says. Rent was comparable to SoDo, but it's closer to residential neighborhoods (i.e., Magnolia and Queen Anne), plus Ballard-bound commuters. He and partner Colin Lenfesty also liked being the first brewery in the area. “The location provided a bit of a clean plate.”

Holy Mountain has a 20-year lease, and Murphy welcomes “Expedia and Amazon creeping down the street.”

The future looks bright: “We are starting to see more bike traffic, more locals. I feel great about the location. I think we hit it at just the right time. We really lucked out.”

And in a few years, he'll also have 4,500 thirsty Expedia workers to serve.