On the Block: Things heat up on a big block in Bellevue

The super-block north of Bellevue Square may be the most interesting, contested and potentially valuable in the downtown core.

The last major development there coincided with the recession, when AvalonBay Communities built Avalon Towers in 2009. That project, on the northeast corner, put two towers — 23- and 13-stories — on a four-story podium.

Bellevue has completed what it calls the Downtown Livability Initiative, and now the Bellevue Planning Commission is working out the kinks in the new land-use code. This is often a block-by-block, project-by-project process before developers file their plans. 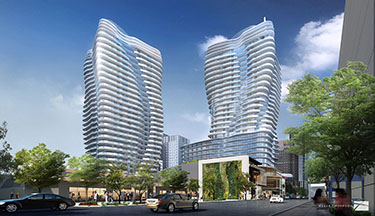 Things started to heat up there last year when developer Andy Lakha spent $44 million on about 2.7 acres facing the south side, at 10300 N.E. Eighth St. Most people call it the Cost Plus World Market property. It's an odd-shaped parcel, which also has a small frontage on Bellevue Way.

The shape is odd because the block's southeast corner — the Sleep Country building — has unnamed owners who granted a long-term ground lease to Kemper Freeman's Kemper Development Co., which is busily expanding both Lincoln Square and Bellevue Square.

Despite not owning that golden corner, Lakha's Fortress Holdings LLC hopes to build two towers on its site that could be around 290 and 260 feet tall in a project called The Elan. But it depends on some zoning adjustments and easing of the rules on how much space there is between towers.

The project would also have to accommodate two mid-block connector paths, further reducing the building site.

This is one reason corners are more valuable than the middle of a super-block. Developers have more options for placing towers.

Lakha and his representatives have been meeting regularly with the city planning commission over the past year. Under the old code, Lakha told the commission that his site would be reduced by 31.8 percent. Various developers and architects are also arguing for a new code that yields more buildable area, density and height.

Lakha is traveling now, but Arne Hall of Fortress gave a preliminary description of the project. Weber Thompson is the design architect and B+H Architects will be the architect of record. The Elan's east tower will be taller than the west tower. Both will have roof decks, two levels of retail, and a variety of amenities, and share 900 to 950 underground parking spaces. 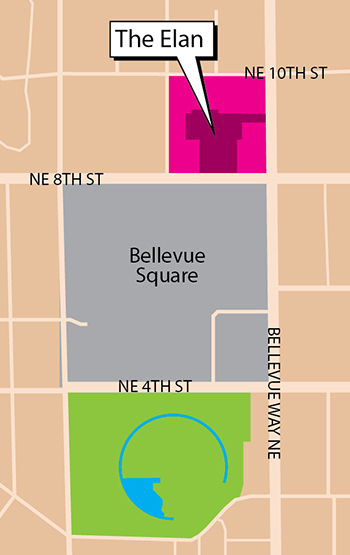 The west tower will have 11 hotel levels with about 160 rooms, and about 12 levels of luxury apartments above, with as many as 140 units.

“The two hotels will have different flags,” says Hall, though the operators haven't been determined. “In a perfect world, our schedule is to submit plans by the end of 2017,” pending the approved code. The city says it hopes to have code recommendations from the planning commission by the end of this month, with a council vote likely in June.

The project could be phased, but Fortress is confident about demand for all four segments of the project.

“The hotel market is really strong. We like the [residential] demand a lot.” He says he expects that Bosa Development will sell all 143 condos in its nearby One88 project before The Elan comes to market. One88 is now in the permitting phase.

The mid-block connector paths will be a challenge, but Hall says, “We are confident in our site plan.”

With lemons, you make lemonade. “The one who's in the mid-block is the one who has to dedicate the right-of-way. We'll have a very European-style hotel driveway that separates the two towers.” That will be used for valet service and guests.

Hall says the site is one of Bellevue's “last frontiers. It'll be a fabulous location to have the annual arts fair.” (That's Bellevue Festival of the Arts, which runs this year from July 28-30, concurrently with Bellevue Arts Museum's ARTSfair.)

Meanwhile, on the west side of the super-block, an LLC associated with billionaire telcom magnate and investor John Stanton last week added another parcel to his holdings.

King County records show that MD Investments II LLC, which is governed by Stanton and his wife, paid $4.5 million for the Burton Building at 810 102nd Ave. N.E. The seller was Rodney Bindon, whose family owned the 9,680-square-foot property for decades. Brokers weren't announced. The transaction was worth about $464 per square foot.

Stanton made his fortune with McCaw Cellular, added to it as a partner at Trilogy Equity Partners and now is CEO of the Seattle Mariners. He couldn't be reached for comment.

However, like Lakha, Stanton doesn't have the valuable corners.

The southwest corner, measuring about 32,000 square feet, has been owned by the McAusland family for decades.

Hall confirms that Fortress did talk with Stanton, the McAuslands and the Sleep Country property owners, but an assembly deal couldn't be reached.

The northwest corner of the block is owned by University Book Store, which closed its store there in January. NAI Puget Sound Properties is now leasing that space, at 990 102nd Ave. N.E. The bookstore has owned the property since 1988, and it isn't looking to sell, says NAI's Ryan Olson.

That property has other tenants, and a long-term lease is available for the vacant bookstore.

“They've determined they're not sellers,” Olson says. “They don't have their developer's hat on.”

The bookstore can afford to wait for code changes or even the next development cycle — if there's a downturn in the near term.

Next to the bookstore on the north side of the block, Paul and David Pong spent $18 million in January for 34,000 square feet. But the small retail building there, at 10223 N.E. 10th St., isn't on a corner. And there's the pesky pedestrian pathway to consider.

Olson says, “I'm aware that Pong has an interest in development.” If Lakha's plans go forward, that could kick things off for more development on the block. Olson calls the block transitional, owing to those expected code changes. And when they come, values will only rise. And don't forget: Light rail arrives in 2023.

Bellevue used to be a place where large parcels were relatively easy to buy — just throw your wallet at the nearest parking lot. In Seattle, by contrast, it feels like all the easy parcels are gone. Small, irregular and even polluted properties are being snatched up for development.

The Bellevue super-block, now divided among seven owners, shows how that old distinction may be fading. Taller, skinnier towers seem destined to rise on smaller sites, as parking moves underground.

So despite the odd shape of Lakha's site on the block, says Hall, “I think we'll be the first one to break ground.”