On the Block: Cadence to buy Hilltop gas station site on Capitol Hill; fill 'er up with housing?

The old churches are typically unreinforced masonry structures, with congregations that are aging and shrinking. They generally can't afford the upkeep on their mostly empty pews.

But who sheds tears for Texaco, Unocal, BP, Chevron, Shell and other fading icons of the unleaded-fuel, pre-OPEC days of yore? 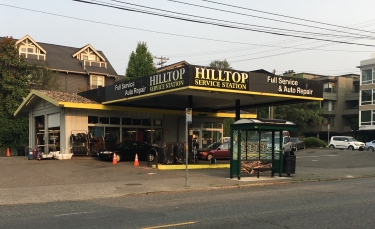 Photo by Maude Scott [enlarge]
The property at 15th and East Mercer is zoned up to 40 feet, with an upzone to 55 feet likely. Ecology lists the site as awaiting environmental cleanup.

For developers, churches are comparatively easy: They can't be landmarked, so you just knock them down and redevelop. The congregation walks away with a check, either to fund an endowment or build a new, smaller facility. Sometimes they co-op in the same building.

But gas stations, so often located on those high-traffic, coveted corners, are almost always polluted and costly to clean up. You've got to be brave, and well acquainted with environmental laws, to tackle such a site.

Such is the case with Cadence Real Estate, which has entered into an agreement to buy the venerable Hilltop Service Station, at 523 15th Ave. E. on Capitol Hill.

Capitol Hill Blog first reported the news, which is supported by an agreement recorded in July, for the owner to sell to Cadence. The Bergamini family, now represented by Bergie's Hilltop LLC, has owned the property since the 1960s. Capitol Hill Blog says the separately owned auto repair business has been there since 1966.

The property isn't publicly listed for sale. No plans have been filed yet with the city. Cadence didn't respond to DJC queries before deadline.

The 13,731-square-foot property is on the southwest corner of 15th and East Mercer Street, opposite Canterbury Ale House. It's now zoned up to 40 feet, with an upzone to 55 feet likely.

The state Department of Ecology lists the site as awaiting environmental cleanup. The former Texaco station site is contaminated with benzene, gasoline and other non-halogenated organics. Ecology correspondence indicates that Aspect Consulting is working on the site on behalf of the owner. Terrane is the surveyor

It's unclear if the old tanks have been removed. Gas sales were discontinued last fall. If, as Capitol Hill Blog reports, the garage is soon to close, that may be so the soil can be cleared as a precondition for selling.

Ten-year-old Cadence is led by brothers Chris Garvin and John Garvin and partner Barrett Johnston. The firm generally acts as its own general contractor. Cadence values its 18-building, 600-unit portfolio at $185 million, and also builds and manages for others.

Current Cadence projects include 42 new units on a steep site at 1622 Aurora Ave. N.; renovating and adding new units to an older Magnolia complex called The Maggie; 29 new units in the Central Area; and possible additions to an older International District building, with 53 units, that it purchased this month for $7.6 million.

Unlike Broadway, which is closer to Capitol Hill Station, the 15th Avenue commercial strip hasn't seen a huge amount of new development in recent years.

One exception, immediately north of Hilltop Garage, is the 34-unit, four-story Stream Fifteen. Stream Real Estate completed that project in 2016, after acquiring the 10,376-square-foot corner in 2012 for almost $1.4 million.

A three-unit midblock property just north of Stream Fifteen, at 615 15th, with only 4,792 square feet of land, is being offered at $1.7 million by Ben Kaufman of Keller Williams Eastside.

The biggest recent deal on the strip was last year's sale of the QFC to local firm Hunter's Capital, for almost $11.3 million. No new plans have been filed for that 37,804-square-foot property.

And, though farther from 15th, back on Broadway, keep your eyes on the Shell station at Pike and Broadway, and the 76 station at Broadway East and 10th Avenue East. Assuming someone brave (foolish?) enough steps up, they won't be there much longer.