On the Block: The state of downtown is fabulous, except for those inconvenient rush-hour gunfights

No news was made during last week's Downtown Seattle Association gathering and economic report at the Hyatt Regency. Instead, news was discussed.

Mayor Jenny Durkan and the DSA's Jon Scholes both dwelled at length on the horrific, fatal Third and Pine shooting last month — as they should. The assembled lunchtime throng duly applauded each time that “open-air drug market” was condemned and the police were praised.

As is evident to passersby at that long-troubled intersection (“the lobby to our city,” per Scholes), the police presence is way up. I've noticed, too, that Amazon has hired its own private security guards, with guns, at its 300 Pine building on the next block (aka BlueShift, aka the nearly former Macy's building). That's on Amazon's dime, of course. (The company was also a title sponsor for the DSA luncheon.) 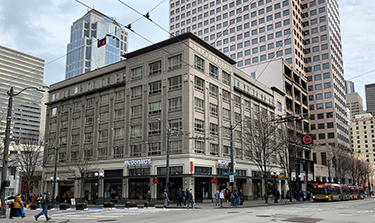 Photo by Brian Miller [enlarge]
Over the past three years, crime is up 30% in the quadrant of downtown that includes Third and Pine, according to the DSA’s Jon Scholes.

Durkan didn't announce any new funding or policing initiatives; and Scholes said the DSA and its private partners would have to step up. But Third and Pine is a very different beast from the DSA's commendable efforts to clean up and activate Westlake Park and Occidental Park.

But the paradox to the DSA's rosy economic forecast, dubbed “Delivering on the New Decade,” is that while downtown is booming, no one has a concrete — much less funded — notion of how to address its yawning inequality and lingering pockets of violence/misery.

Planners often use the ideal metric of 1.5 jobs per housing unit. So, 10,000 new jobs per year requires about 7,500 apartments per year — not all them downtown, of course.

Hotels we'll leave for another day.

Then, back at Third and Pine, the bad news. Over the past three years, crime is up 30% in that quadrant of downtown, according to Scholes. His colleague Marilyn Boss cited the grim combination of homelessness, untreated mental illness and addiction, and crime.

You can't blame the lack of eyes on Third and Pine. Durkan says that 50,000 daily commuters pass by that corner each day. As Scholes says, it's a lobby — a public place, a transit hub, not someplace you want to linger.

Who actually owns the corner? The Gilmore is a condo, with affordable housing on top of the McDonald's and MoneyTree. California investors own the retail; and the Church of Scientology owns its storefront space next to the transit tunnel entrance.

Next door, the locally owned Gibraltar Tower has offices on top of shops vending cigars, beer, sundries and cellphones. The tenant mix is, to put it politely, sketchy. Should we blame the landlords for blight? But replace those tenants with a Starbucks, and would things be any different? Look south to the green mermaid Third and Pike, and I'd say no. Third has a culture and tradition of its own — like Skid Row or the Bowery.

Boss blamed “the failings of the criminal justice system that keeps repeat offenders on the streets.” Well, maybe. But crime is only part of the cocktail.

Up from San Francisco, keynote speaker Alicia John-Baptiste, an urban planning expert, compared our two blue prosperity/inequality bubbles with familiar observations and bromides. But there were no hard proposals.

The polite DSA gathering was not a Bernie Sanders rally, and there were no calls for a revolution. The closest John-Baptiste got to an incendiary slogan was “social inclusion,” which hardly lights the firebrands or sharpens the pitchforks.

To end nightmare commute times, to get homeless folks sheltered and the mentally ill treated, to create more housing — at all price points — she said, “This is a structural problem, and it requires structural reform.”

Structural reform means no more landmarking of dubious-but-familiar character buildings near transit hubs. (See the Capitol Crest Apartments, aka the Annapurna Cafe building on Capitol Hill, where a 50-unit, six-story redevelopment plan was recently thwarted by the landmarks board.)

Structural reform means that emergency shelters and permanent housing for the homeless would have to be exempt from public process and citizen lawsuits — so they could be built in any neighborhood.

“One of the big threats is that we're just running out of space,” said Scholes of potential office sites — but the same is true for multifamily builders. Bellevue simply has more undeveloped or under-developed land. And it'll soon be linked to Seattle's downtown core by light rail. We can't compete with that, and that's why Amazon is expanding in Bellevue, not here. SLU is virtually built out, and certainly gridlocked unless you live within walking distance.

While there was a DSA panel last week on lidding Interstate 5 to gain 18 acres (mostly for needed parkland), the only way to create the space that Scholes and others want is via big zoning changes — single family to multifamily, mid-rise to high-rise, industrial to office and residential.

And that coming battle between competing interests will make Third and Pine seem tame and peaceful by comparison.