Real Estate Buzz: Things are looking up in Seattle as new bars and restaurants open in high places

Rooftop decks are a must-have in new office and apartment buildings, but mostly those scenic views are only for the people who live and work there. But some developers are figuring out that putting a bar or restaurant on top will let more people enjoy the views — and monetize the roof.

The latest example is the Thompson Seattle hotel. The roof of the 12-story, 158-room hotel at 110 Stewart St. has a restaurant called Scout and a bar and lounge called The Nest. Both will be operated by Josh Henderson of Huxley Wallace Collective.

The hotel opened June 1, and Scout and The Nest will open by June 13.

Amanda Parsons, general manager of Thompson Seattle, said The Nest will be the tallest hotel rooftop bar and lounge in Seattle. Thompson has put rooftop bars and restaurants on other boutique hotels in its international chain, and decided it made sense here given how much people like to be outside on a nice day.

“Outdoor enjoyment is such a fabric of the local Seattle culture, we wanted to bring that concept to life within the property,” Parsons said. “We noticed how frequently local patios fill up when the sun is shining and wanted to provide an environment for locals and guests to indulge in the sunshine and the surroundings.” 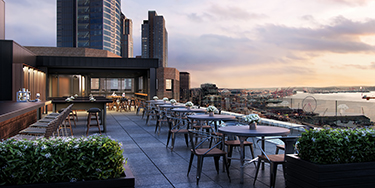 But we know it isn't always sunny in Seattle, so the spaces also have indoor options.

Thompson Seattle is part of a mixed-use complex at First and Stewart that also includes 95 apartments. The complex is owned by a limited liability company that's a partnership of Geolo Capital and Touchstone executives Douglas Howe and Shawn Parry.

Olson Kundig designed the shell and core, and Jensen Fey Architecture & Planning worked with Studio Munge on the interiors. Turner Construction Co. is the general contractor.

Tom Kundig, principal and owner at Olson Kundig, said a rooftop restaurant and bar was part of the plan all along. He called the roof the building's “fifth facade,” and said “you have to carefully consider how the parts, such as mechanical devices, venting and more, are assembled on the top of the building so it is still both a visually and acoustically beautiful experience.”

“These become major destinations both for our local community guests and a tourism visitor moment,” Leavitt said. “In addition, they become a stellar office amenity for meetings and private events.”

Courtesy city of Kenmore [enlarge]
The Town Green will have a community building and public plaza.

A smart village in Kenmore

Developing a downtown center for Kenmore has been a top priority since the city incorporated in 1998 and it's finally coming together.

The center is called Kenmore Village and it recently won a partnership award for 2016 from the Washington State Governor's Smart Communities Awards program.

Kenmore is working with MainStreet Property Group to develop housing, retail, a park and a medical office at 68th Avenue Northeast and Northeast 181st Street.

“MainStreet couldn't be more excited to partner with the city of Kenmore to help fulfill their vision for growth, development and revitalization for the Kenmore downtown core,” said Kim Faust, senior vice president of MainStreet Property Group. “The solid collaboration between MainStreet and the city has accelerated the pace of the downtown development, and it's exciting to see the sense of pride and community in the area.”

In January, MainStreet opened the first apartments at the site: Spencer 68 Apartments + Lofts, a 138-unit complex. The second phase of that project is under construction now, with another 58 units that will open this winter.

Dahlin Group Architecture of Pleasanton, California, and GGLO designed both Spencer 68 phases. GenCap Construction Corp., an affiliate of MainStreet, is the general contractor.

Construction is underway on another MainStreet project at Kenmore Village: Linq Lofts + Flats with 94 apartments and 20,000 square feet of retail leased to EvergreenHealth. That project opens this fall.

Dahlin Group is architect on the project and GenCap is the general contractor for Linq.

This is my last Buzz.

After almost four years at the DJC I am moving on to cover technology at Geekwire. It has been a pleasure getting to know the DJC community and writing about so many iconic projects in Seattle. When I started, I had little knowledge about commercial real estate. I couldn't define “incentive zoning” (though to be fair, I can only kind of do that now), and I had no clue what a cap rate was or how to calculate the price per square foot.

But over the years I like to think I gained a pretty decent grasp of the business, and now I can tell you what's going into almost every hole in the ground in this city.

Seattle today looks so much different from when I moved here in 2009 — and even when I started at the DJC in 2012. I am excited to watch as all of you continue to put your mark on the skyline.

And as a 30-year-old renter, I kindly request that someone build more condos so I can buy a place.

Best of luck! If any of you want to reach me, I am at natjlevy@gmail.com.