Design Perspectives: Seattle Aquarium swims over toward the market

One plus one equals three for the waterfront.

Construction started last week on an extension of Pike Place Market that will step down the bluff toward the waterfront. That followed an announcement that one of the waterfront’s biggest attractions — Seattle Aquarium — will expand inland, toward the market.

The success of both depends on a third piece: Overlook Walk, a bridge-like walkway that will permanently connect the two Seattle landmarks over the 100-foot drop that separates them. 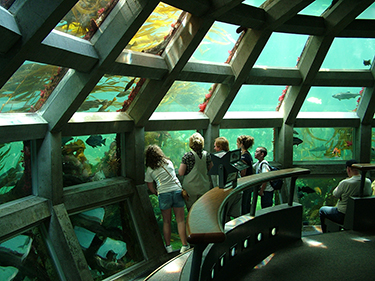 Images courtesy of Seattle Aquarium [enlarge]
The popular Underwater Dome dates back to 1977.

They will meet at Building C, which is a special site in the framework plan for redeveloping the waterfront. The building is tied into the base of the Overlook Walk where it meets the pedestrian promenade — another major feature of the post-viaduct waterfront — that will run along the shoreline.

The site has always seemed like a natural match for the burgeoning aquarium, but until now the institution has been cagey, exploring options to add space over the water to the south or north. Last week, that changed.

The master plan for the aquarium expansion, developed with the help of architects EHDD of San Francisco and exhibit designers Thinc, shows a major exhibit called Tropical Pacific on the footprint of Building C. One day people on the pedestrian promenade may look up to see the bellies of sharks, swimming in a towering tank.

Seattle Aquarium fills Pier 59 and Pier 60. While the plan steps eastward, Pier 59 will open westward, toward Elliott Bay, with visual connections to the water and a cafe.

In fact, the master plan calls for revising every element of the aquarium except the basic structure of Pier 59, which is protected by its historic status. It shows a campus-like group of exhibits next door on an expanded Pier 60, where the popular native harbor seal exhibit opened in 2013. 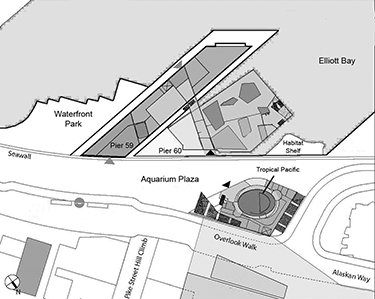 [enlarge]
The expansion plan shows a campus-like setting with a new exhibit called Tropical Pacific at the foot of the proposed Overlook Walk. The aquarium will have expanded exhibits and a cafe with views.

After a public comment period, Seattle City Council will vote next month on the aquarium master plan. Approval will mean the $100 million project moves to the design phase.

Construction has not been scheduled, but it’s expected to begin by 2019.

Seattle Aquarium opened in 1977, but the current era really began with the stabilization of Pier 59 in 2007, along with revisions that increased the capacity of the aquarium and moved the entrance to Alaskan Way. Visitors have increased to over 800,000 per year.

New material and structural systems have made it possible to bring the aquatic environment right out among us.

When Seattle Aquarium opened, the popular underwater viewing dome was built of concrete, with glass panels just a few inches thick. By contrast, the Window on Washington Waters exhibit that opened in 2007 just inside the entrance is an expanse of clear acrylic one foot thick.

Bob Davidson is president and CEO of Seattle Aquarium Foundation, which has taken over management of the aquarium from the city. Davidson has overseen planning and fundraising for the expansion, which is expected to make Seattle’s one of the top five U.S. aquariums — alongside the celebrated Monterey Bay Aquarium, also designed by EHDD. A crowd-pleasing Tropical Pacific exhibit should help make Seattle Aquarium more visible and exciting for visitors.

Seattle Aquarium is built over water, and positioned to celebrate a marine environment right outside its walls. The solid wall now on the waterside at the end of Pier 59 is a missed opportunity, to say the least.

“The whole west end is blocked off,” said Davidson. “You might as well be in Omaha.”

After the expansion, Pier 60 is likely to be a zoo-like open-air display of shoreline habitats. School groups can go in from the Pier 59 entrance on the street to education areas inside the historic pier building. A separate entrance, probably from Pier 60, will serve the public, crossing over to the middle of Pier 59.

Some visitors will head directly to a new view restaurant on the west end that will be a separate revenue generator for the aquarium.

Those who buy tickets can take different routes through the aquarium, and return to a central gathering place. The operative term is hub-and-spoke, and it represents a departure from the current aquarium layout, which is much more directional.

But the action will really be on the outside. The expanded aquarium promises to be very urban, with closer ties to downtown and pedestrians along the waterfront. With the step over to the Building C site, the aquarium campus will mix with the pedestrian promenade.

And the plan calls for a path, open to all, around the perimeter of Pier 59. This may become a singular example of a public walkway out to the end of an intact historic finger pier.

While the marine ecosystem is celebrated inside the aquarium, the public can circulate freely from the new waterfront promenade to the end of the pier and around it, taking in views of the inner and outer harbor.