Design Perspectives: After decades of talk, there's action on Lake2Bay

People who live and work in South Lake Union walk a network of green streets, with wide sidewalks, planters and places to sit. But they seem to stop at the edge of the neighborhood, without easy access to attractions in Seattle Center and Belltown.

And tourists? They're just plain confused, according to landscape architect Lara Rose, who recently spotted a woman near Seattle Center, clutching her children's hands and wondering out loud where their destination was — and if they could safely cross streets to get there.

Rose wants to help. She's a principal with Walker Macy and design lead for Lake2Bay, a kind of super-green route — mostly on streets — that will connect South Lake Union, Seattle Center and the waterfront. It's likely to have artwork, better walkways, more signage and a park-like feel in places.

The consultant team will produce a concept plan to use for raising funds. Parts of Lake2Bay will get built over the next decade, spurred by rapid development in South Lake Union, financial support, and a public desire for better open spaces to support all the residential growth in downtown Seattle. 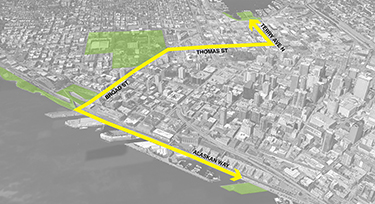 The Lake2Bay route crooks between the south shore of Lake Union and Elliott Bay. It goes south from the lake on Terry Avenue, then west on Thomas Street, southwest on Broad Street, and turns south on Alaskan Way to join up with the redesigned central waterfront. Lake2Bay would end near Piers 62 and 63, just north of Seattle Aquarium.

The idea of connecting South Lake Union to Elliott Bay through a clearly identified route has been around for a while, under different names. The path is believed to trace an important Native American trail from the distant past, but for the last four decades it has existed largely in the imaginations of planners and urban designers.

Now it has fresh backing.

Seattle Parks Foundation is sponsoring Lake2Bay and organizing the funding. Private support from the parks foundation and Vulcan paid for an “Opportunities Plan” by Lesley Bain of Framework. A traffic study by Marni Heffron was made possible by the Bill & Melinda Gates Foundation. Another $300,000 covers the conceptual design phase. Private backers for this phase include the parks foundation, Space Needle Corp., Amazon and Vulcan.

Seattle's Office of Economic Development also awarded a $70,000 grant for this phase, according to Thatcher Bailey, director of Seattle Parks Foundation.

In selecting the Walker Macy team, Bailey pointed to its interest in mixing infrastructure with art for things like water recirculation, and helping with political challenges like cross-agency partnerships. Portland-based Walker Macy has an office in Seattle and several local projects, including streetscape revisions along Terry Avenue in South Lake Union.

“They bought some fresh perspective and big thinking, grounded in reality,” said Bailey. “The conversation has been going on for 40 years … Let's nail this.”

“In the last six to eight months we've been working with the mayor's office, the port and parks,” said Bailey. “When Walker Macy gets done, there is a handoff.”

It's not a trail

The projects from this phase will vary in type and scale, but they should create the sense of being in a special place — that connects to other special places.

“It's not a bunch of bells and whistles,” said Bailey. “It's about connections.”

Perhaps most importantly, it will be on land the city already owns: the street. “It's not about new public spaces, so the price tag is less than staggering.” 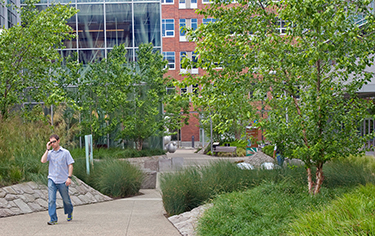 [enlarge]
Along Terry Avenue, Walker Macy has designed a number of street improvements that make walking around more pleasurable.

Mark Hinshaw, a principal at Walker Macy who also writes and speaks about urban design, relishes the possibilities of Lake2Bay.

“This is a great opportunity to revisit what the public right of way really does for us,” he said. “We're moving that bar farther along.”

“There's probably no appropriate term for it,” Hinshaw said. “It's certainly no trail.”

For much of its history, Broad Street has been a mini-highway — a quick way to cut across town from the waterfront to South Lake Union, complete with strip-style motels and retail near Seattle Center.

Those days are receding. Broad Street was permanently closed last year between Fifth and Ninth avenues. The street grid is undergoing a massive revision to improve connections to Interstate 5 from South Lake Union, and also to reconnect Thomas Street over state Route 99 as it emerges from the yet-to-be-dug tunnel.

Things are on hold until the tunneling machine is repaired, so timing is uncertain for Thomas Street projects.

But in the long term, Thomas and Broad streets are likely to go on a road diet, with better crossings and more space for pedestrians and bicyclists and less for cars.

The Lake2Bay route will be easier and more pleasant to walk, without walling off some of the big features that give it character — a railroad crossing (at Alaskan Way) and an electrical substation (along Thomas just west of state Route 99).

Expect art — and not necessarily pieces of sculpture sticking out of the ground. Art projects are more likely to be part of the urban infrastructure, from paving to stormwater management.

Hinshaw cited Growing Vine Street, a two-block stretch in Belltown (on Vine Street, just north of Belltown P-Patch), where stormwater is put through some extraordinary paces: inside twisty drain pipes on high walls and creating sculptural cascades on the street.

At some point along the Lake2Bay route, Hinshaw said the spot where the watershed switches and stormwater naturally flows toward Elliott Bay instead of Lake Union will be marked, perhaps with a water feature that combines art and engineering.

Lake2Bay is part of a larger trend in urban development that might be called parks-to-streets. Urban residents demand open space, but city governments can't seem to stomach the expense and political challenge of creating new plazas or parks.

So they are trying to “green” streets, and make the existing right of way more inviting and beautiful for people instead of just cars. A recent example is Bell Street Park, where cars and pedestrians have been put on equal footing, with the street paving raised to the sidewalk level. It is the first street segment in Seattle to be designated a city park, and it is partly occupied by tables and chairs.

The framework design for Seattle's central waterfront uses much the same principle, on a much larger scale.

Planning and fundraising for Lake2Bay draws attention to another favorite pedestrian corridor in Seattle that may get a redo. Pike-Pine Renaissance would connect Capitol Hill with the waterfront via Pike and Pine streets. The route passes over Interstate 5, through the commercial heart of the city and down to the bay, hooking into MarketFront, a newly approved complex with buildings and walkways that will connect with Overlook Walk, part of the waterfront redevelopment. Pike-Pine Renaissance has the backing of the city and Downtown Seattle Association.

As various projects change Lake2Bay over the next decade, expect a series of smaller-scale and even temporary projects that begin to redefine Thomas Street and Broad Street, giving them new life — and maybe lots more pedestrians.