Design Perspectives: Is good design getting lost in the building boom?

City Hall is digging through a pile of permit applications, and there's more to come.

A lot of money is being sunk into Seattle, but is it going into inspired design?

Now is a good time to ask. When the cranes and trucks and sidewalk fences are cleared away, we'll be living with a new generation of mid-to-high-rise buildings and a new streetscape, especially in South Lake Union.

The wave of construction has jumped the freeway to Pike/Pine, and spread as far south as Columbia City. 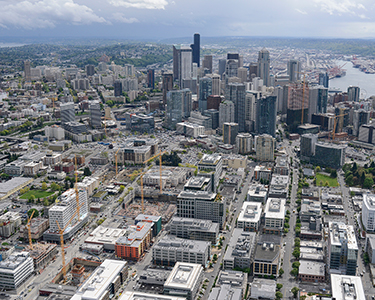 Photo by Sky-Pix Aerial Photography [enlarge]
Over 50 construction cranes are working in downtown Seattle. Once they come down, will we look up to this generation of buildings or not?

Some of the new buildings will make us proud to live here. Unfortunately, a lot of them will just take up space and add leasable square feet to someone's portfolio. There will also be buildings that make people genuinely mad, and rightly so. The city tries to avoid the worst design problems with regulations. But that's hard because the complaints are never the same from boom to boom.

The city tried to get ready for this one. The stage was set in 2006 when height and density limits were increased for downtown neighborhoods.

Then the recession came and went. General migration into cities and a strong national economy set things up, and then the local economy went into overdrive. Tech jobs began flowing in, and demand for rental housing soared.

Now an estimated 10,000 residential units are on the way. Neighborhood design review — a system of volunteer panels charged with screening projects for big flaws and missed opportunities — is trying to keep up.

While panelists are stretched to the limit in booming neighborhoods, opportunistic investors are looking for ways to maximize square footage, and good design may not be a priority.

Remember the four-pack? It was a phenomenon of the last boom: four, freestanding skinny houses built on single-home lots, and neighbors were watching. Diane Sugimura, director of the Department of Planning and Development, says new guidelines for low-rise residential neighborhoods will make the four-pack a thing of the past. 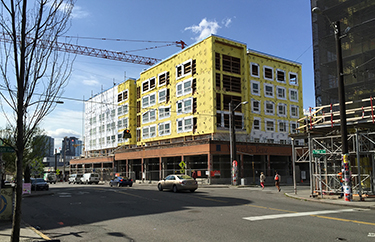 Photo by Clair Enlow [enlarge]
Mixed-use projects are going up all over Pike/Pine, and residents — and architects — are watching the results.

Who is watching now as our densest urban neighborhoods are transformed?

Architects, of course. The best ones critique each other's work in a friendly, supportive way before it gets built. But they'll also — off the record — talk about design abuses and missed opportunities they can see right out the window and down the street.

And they have names for some of these, like the “bread loaf” and the “facade-ectomy.”

The bread loaf is a structure that rises — quickly and mindlessly — like industrial bread, to its maximum allowable height and bulk. Like any factory-made product, it is bland and perfectly predictable, and it tends to overwhelm. At worst it lacks features that tie it to any identifiable place. It blocks light for the neighbors, and is unlikely to offer much daylight for the occupants.

The facade-ectomy is becoming a predictable strategy in South Lake Union and Pike/Pine: salvaging part of a historic or “character” building in an upzoned area that's ripe for redevelopment. The old structure is surgically removed, leaving an outer brick wall or two to remember it by. The preserved facades then become part of the skin of the new building — a welcome but shallow reminder of the original, with nothing of the old shell inside. Look for a bread loaf right behind the facade.

There are other, underlying threats to good design in a big boom like this one. Based on comments from architects who did not want to be identified, the list includes zombie capital, review fatigue and bait-and-switch construction.

Zombie capital invests in projects that have nothing to do with the long-term life of the community and everything to do with short-term profit. This can lead to a bread loaf or the physical opposite: gross underdevelopment. An example might be a national or international chain placing a new one-story drive-in outlet in an urban center, as if it were in North Bend. In either case, thoughtful design just isn't a priority.

Another hazard, special to booming Seattle, is review fatigue. If there is a lack of care or imagination on the design team, the reviewing panel can wind up trying to solve too many problems. The resulting delays get very expensive for the development team. So even though no one is happy with the outcome, approval is granted just to end the process.

Finally, there's the risk of bait-and-switch construction. Quality design meets a smooth review process, but it all ends badly. The owner-developer-contractor team switches out approved finishes or fixtures, structural fastening systems, window frames or other details as designed. With a lot small changes, the result is very much less architecture.

Design review in Seattle works to reign in the worst, but architects agree that the process can also make exciting and imaginative projects difficult to achieve. Because of concerns that emerged from previous building booms, there is a growing checklist of guidelines that review boards must apply. Developers don't like this because it tends to make the process long and expensive. And while architects like constructive criticism, they complain that money spent just getting through design review might be better spent on thoughtful design and high-quality materials.

Good background buildings deserve respect, just like iconic architecture. The real hazard of a boom like this is mediocre design, projects that do not deliver good experiences inside and outside the walls. That costs us all because we lose the opportunity for good-to-great architecture.

Like all booms, this one will end — maybe even before the supply of developable sites runs out. Some projects now in the permit pipeline will go on hold until the next boom. We will be able to walk freely on every sidewalk again, and take it all in.

Let's hope we like what we see because it will be with us for a long time.