Is modular the answer to affordable housing?

Modular design and construction are having a moment, with increased interest in their potential for efficient and affordable housing.

As with any new technology, expectations are high that modular will solve problems that plague the construction and development industry. Many companies and venture capitalists are spending millions trying to disrupt all parts of the development spectrum, attempting to reform design, construction, lending and municipal practices.

Faced with an affordable housing crunch, the city of Seattle, King County and other jurisdictions hope that new solutions such as modular will quickly remedy a growing problem. While there have been a few modular housing projects in Seattle, the numbers are not as anticipated. Many are left wondering why developers haven’t taken advantage. 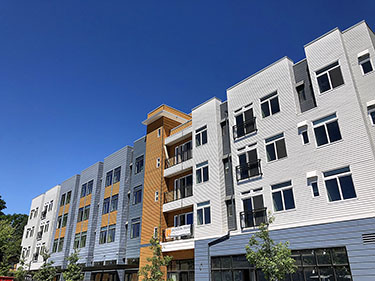 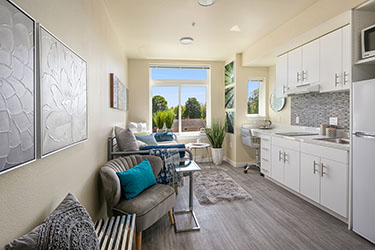 The answer lies in further education on how to realize the value of modular, which can only come from direct experience. Because there haven’t been many modular projects in the region, the body of knowledge is limited to those who have had a part in putting boxes on site.

With a significantly decreased time to market, and the ability to control quality and lock in labor costs (often in cheaper markets), modular adds value to the entire chain of development, but its success relies on the sum of its parts. To fulfill its promise as the paradigm shift needed to reform the industry, modular design and construction must be reimagined as a highly cooperative and coordinated system.

The nature of modular is to build a substantial portion of a project in finished pieces in a factory-controlled environment. Modules are typically 15-by-65-by-12-foot finished boxes that are shipped to the jobsite and assembled in place with a crane. Modules can contain everything from completed studio apartments, hotel rooms, or even hospital treatment rooms. Multiple boxes can be assembled together to create larger living spaces and multiple bedroom units or even community amenity spaces.

The units arrive on site with tile backsplashes, cabinetry and fixtures already installed. Setting the units is a matter of days, offering significant savings in time and labor.

During design, careful consideration is made to bring all utility connections through the corridor, so minimal trade work is done within the unit after it is set in place. Utility hookups are completed while the exterior envelope is sealed or “stitched.”

The real value in modular is in the construction timeline. The modules begin construction in the factory in parallel with foundation development. Ideally, once a podium or slab is ready, boxes are stacked on site, and a five-floor project can go from podium to fully dried in with units in place in less than six weeks.

This parallel development and accelerated timeline potentially saves six to eight months on a construction schedule. The savings are apparent in a tight labor market, as less time on site significantly reduces costs (not to mention the reduced construction impact on surrounding neighborhoods).

The shorter schedule also allows contractors to better time construction projects during ideal weather. Foundations are poured in the spring and boxes are set in the summer, eliminating the need to work through the winter or pay to heat a construction site to accommodate weather-sensitive trade work.

Modular construction requires a collaborative approach throughout the entire process to truly realize the value, beginning with involving the architect in lending and financing conversations. The typical shorter modular construction schedule benefits developers by reducing lengthy carrying costs, as well as interest on construction loans.

Lending practices must also adapt to the speed and efficiency of modular construction because a typical draw schedule doesn’t apply when 65 percent of a building is produced in six weeks in a factory. Early conversations with lenders can mitigate these concerns but require a level of team collaboration atypical of a traditional development.

The 2030 Challenge for Architecture states that all new buildings, developments and major renovations shall be carbon neutral by 2030. This is critical for the building industry, which represents nearly 39 percent of global carbon emissions, according to Architecture2030.org.

This ambitious goal calls for innovative strategies to rethink construction practices. Modular construction at its core is geared toward sustainable outcomes. Factory production has been documented to produce less than 2 percent construction waste, where a typical jobsite can see anywhere from 9 to 12 percent.

A case study by the University of Alberta in 2009 concluded that there was a 43 percent reduction of carbon emissions by selecting modular construction over typical site built. The factory environment also provides superior quality control and access for maintaining tighter air and weather barriers, reducing on-site work and improving the overall energy performance of the building. 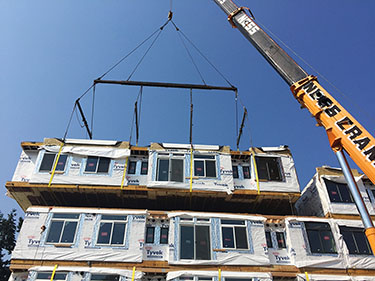 Images from Jackson | Main Architecture [enlarge]
A crane set the units at the jobsite in North Seattle. 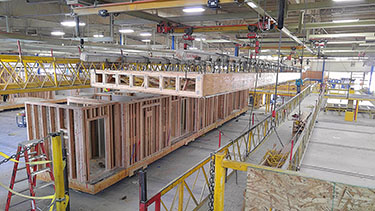 [enlarge]
Modules were built in an Idaho factory and trucked to Seattle.

Modular construction has the potential to provide a disruptive and innovative construction delivery system, but its strength comes from the sum of its parts. There are still critical players in the modular ecosystem that require significant attention to make modular the affordable housing solution that many envision.

Currently, municipalities are not prepared to support modular construction. A typical modular building requires a building permit thorough the local authority having jurisdiction (AHJ), but most of the drawings in that permit are comprised of a pre-approved permit from the Department of Labor & Industries Pre-Fabricated Building Department — two permits in one.

The difficulty has been in identifying the scope of each AHJ, and where L&I begins and where the AHJ takes over. These inefficiencies are being worked through in the city of Seattle, but only by a few pioneering projects and teams that are innovating and adapting as they go.

With permits in hand, difficulties are often met with local building inspectors who are not versed in the methodologies of modular construction. Inspectors can stop work on jobsites from lack of understanding, and non-standard fire and life safety assemblies.

There is much work to do to further educate municipalities and share the information gained from construction and design professionals. This roadblock highlights how the development industry is still rather siloed, and information is not readily shared.

Modular and off-site construction have the potential to provide many affordable, rapidly built, sustainable homes to regions facing affordable housing crises. Jackson | Main Architecture and a handful of other firms are trying to drive innovation and move the needle on the problem.

Great strides have been made and more progress is on the horizon. Currently, modular is not achieving its full potential and is falling short on the sum of its parts. With more collaboration, policy changes, and willingness among lenders to think outside the norm, real change can be made.

The paradigm shift to modular would be the spark that the development industry needs to gain the overall alignment to deliver affordable housing projects that meet the needs of our region.

With modular projects in the ground locally, thought leaders such as Jackson | Main Architecture are becoming practice leaders. By remaining open to collaboration and sharing information, experienced teams can pave the way to ease municipalities towards a sustainable solution.

John A. Morefield is an architect at Jackson | Main Architecture focusing on innovative modular design applications and policy development. He is a member of Seattle’s West District design review board.