Developers must ponder this: Save or scrape?

Residents of in-city neighborhoods know well the trend of a red-hot real estate market: Perfectly good houses are being torn down, replaced by new homes that better suit the needs of new owners. Often, that means maxing out the site and disrupting the scale and character of their neighborhoods.

The commercial sector is no different. High demand for buildings of all kinds puts tremendous pressure on urban centers, where vacant ground is rarely available. Developers increasingly look to sites with underutilized buildings and grapple with the decision to demolish the building or renovate and possibly expand and repurpose.

Sometimes it makes sense to start over. Frequently, it does not. Renovating can save money and time, preserve (and add) valuable character and natural assets, save energy and material resources, and reduce waste. While each project is unique, and every owner has different goals, these key questions help owners evaluate whether to scrape or save:

• How strong are the bones? If structural and/or MEP systems need significant modification, you’ll need enough value in other areas to offset these costs.

• What are the property’s other assets? Mature trees or other natural features, a great location or site flexibility can be just as important as building qualities.

• What are the environmental costs/benefits of demolishing and rebuilding? It’s often said that the greenest building is the one that’s already built, because it embodies energy that doesn’t have to be expended to produce a new one. Also, demolishing and disposing of a building is increasingly expensive.

• What does your schedule allow? Repurposing is often faster. 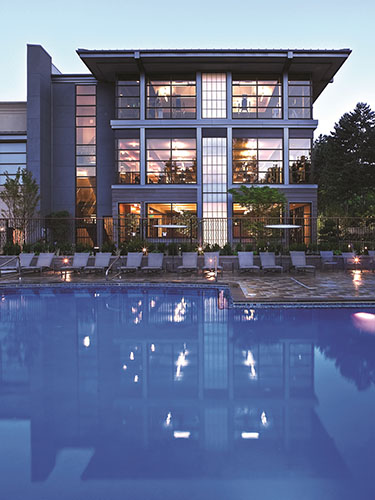 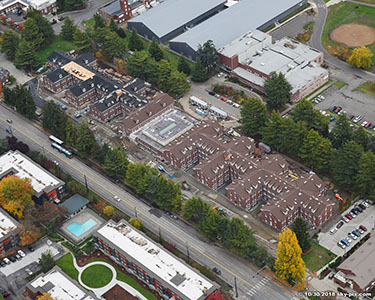 Photo by Sky-Pix Aerial Photography [enlarge]
Mercy Magnuson Place will have 148 affordable apartments, an early learning center and health clinic when a renovation is finished in May 2019.

Consider the case of a multi-brand, exotic car dealership new to this market. For the company’s showroom, Baylis is studying the renovation of a single-brand auto dealership built in the 1980s.

The owner originally wanted to buy vacant land and build new, but our study showed a price-tag that was significantly over their budget. Meanwhile, another site was found, already developed with a car dealership. The structure was in great shape, and it had several features required in the new facility, as well as a better location, access and potential for expansion.

These benefits, along with the money saved by avoiding several code issues associated with developing the first property, reduced costs for the owner by nearly 40 percent.

For both Bellevue Club and Pro Club, given the buildings’ strong infrastructure and other assets (parking, location), it made financial sense to reconfigure and update spaces to meet new program and space needs.

Different story for a Kirkland-based tennis club, whose 48-year-old, four-story clubhouse would require substantive changes — including new building systems, plan re-configuration and ADA features — to meet code and club needs. After studying the options, we found a cost differential of less than 8 percent between a major renovation and tearing down the building and creating a new clubhouse.

While building the new clubhouse will be slightly more expensive, it would meet club goals, with room to expand along with a building that meets current zoning and building standards. They are considering their options. What would you do?

Mercy Housing Northwest, Tonkin Architecture and general contractor Rafn Co. are rehabilitating Building 9 in Magnuson Park, a dilapidated barracks built between 1929 and 1940 at Sand Point Naval Base in Seattle. When completed in 2019, the newly renamed Mercy Magnuson Place will include 148 affordable housing units, an early childhood learning center and health clinic.

While the building fell into disrepair after being decommissioned in the 1990s, its historical value and character were intact, along with its key role in the neighborhood’s identity. Equally important? A desperate need for family housing in Seattle for people earning between 30 and 60 percent of the area’s median income.

While the preservation and adaptive reuse of this large structure and site is challenging in terms of cost, design and permitting, it’s worth preserving in the name of providing safe, affordable places to live for working families while preserving history, character and neighborhood fabric.

A final example is one of the most creative transformations we’ve seen in Bellevue: the conversion of a bland, 1970s low-rise office building into the new home for Bellevue First Congregational Church.

The city’s oldest church (1896) occupied a 1952 building on what had become very valuable real estate in the central business district. As part of an extensive strategic and facilities review, the congregation decided the best solution was to sell their long-held property for redevelopment and relocate to a newer facility. 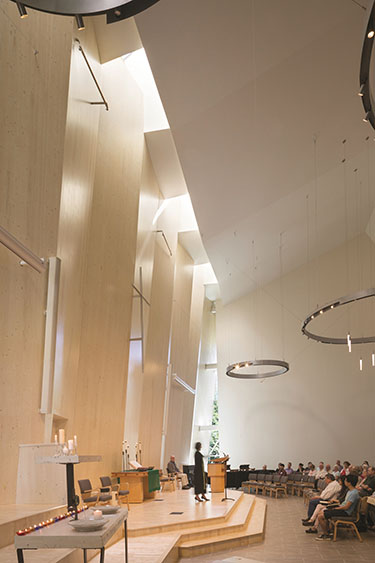 In 2014 First Congregational sold its property for $30 million, purchased an office building for half the price less than a half-mile away, and hired architect Susan Jones (atelierjones) and Goudy Construction to carry out their desire to create an inspiring light-filled space.

The office building was not the draw — rather it came with underground parking, utilities, an attractive atrium, and zoning that allowed upward expansion, along with solid structural and system underpinnings.

Jones’ design demolished just one corner of the office building to insert a soaring bell tower and sanctuary featuring a 40-foot-tall folded cross-laminated timber wall. The rest of the building was renovated to support administrative, educational and community functions.

Total project cost was around $10 million (in addition to the building acquisition); the church used remaining funds from the sale to establish an endowment that could be used for mission-driven projects in the future, including building development.

Building on one of the few raw pieces of ground in downtown Bellevue would have required far more money, at much greater environmental expense. Instead, the church’s facility and ministry needs are met, the block is improved by an inspiring design that demonstrates an important new sustainable building approach, and the life of a 50-year-old building is extended by several decades.

Whether a custom home, multifamily or commercial building, whether 20 years old or 120, the decision to save and renovate always comes with a calculation of costs and benefits. Too often however, this analysis falls short, focusing solely on dollars at the expense of long-term value. As the church example demonstrates, not every building is special, but that doesn’t mean it isn’t worth saving.

Yes, we need the density in our urban centers and yes the market is hot — time is money, the market doesn’t wait — we get that. We also know there is always a market for value, especially the value inherent in structures that maintain character, reduce environmental impacts or simply lower overall building costs.

Tearing down in the rush to keep up with the market risks demolishing the very traits we love about this place. We can’t get those back, and indeed much has already been lost. Surely, it’s worth slowing down enough to consider whether we’re creating a city we still want to live in.