By KAREN JOHNSTON and SCOTT JOHNSTON
Special to the Journal

A major event was about to begin on an atypical Thursday afternoon at BCRA’s Tacoma office. A project manager was lying on a couch, eating popcorn, on a makeshift set at the front of the big conference area. Twenty judges’ chairs (holding clipboards with evaluation criteria) were angled in front of the set with 50 chairs behind for BCRA staff. Two cameras were set up with a large screen to connect with those off-site.

Around the office, people in costumes scurried to complete a task or to practice one final time with a colleague. An architect wearing a green wig was pacing and gesturing at the back of the room. In the main event room, attendees were starting through the food and drink line.

Were these architects and engineers trying out for a reality show? No, this silliness was a calculated strategy to invigorate important business development (BD) ideas and practices in the firm. Teams were competing to determine which of them was best able to demonstrate the most effective BD practices.

BCRA named the event Thunderdome after the gladiatorial arena in the movie “Mad Max Beyond Thunderdome” — and the showdown was about to begin! 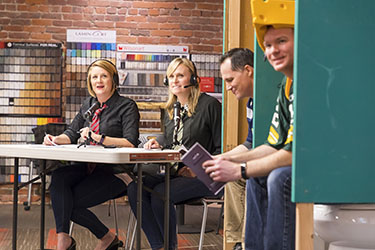 Photos from BCRA [enlarge]
At BCRA’s Thunderdome event, play-by-play announcers critiqued a client/consultant conversation during halftime at a Seahawks-Packers game. 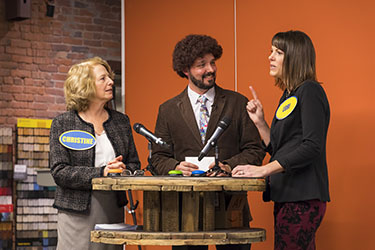 How does wearing a green wig motivate technical professionals to develop business? The answer is two words: accelerated learning. These principles create learning by doing. The learning concepts and skills must be not only understood and explained — they must also be demonstrated and evaluated by others.

In 2015, BCRA, a 100-person architectural firm with offices in Tacoma and Seattle, asked Johnston Training Group to train 25 of its technical professionals in BD.

That program, which also was designed using accelerated learning techniques, helped these architects, engineers and designers understand and implement key elements of developing business through problem solving, not selling. They learned what to say and do during a meaningful BD conversation, how to make time to develop business and overcome resistance, and strategically whom to contact.

Over time, the firm grew, leadership shifted, and the market changed. New technical people with a variety of skills and experience came on board. The firm needed a BD recharge — but not a repeat of what many had already experienced.

How was Thunderdome organized?

Those who had participated in the original program were divided into teams of four people and were assigned one of the following BD concepts to teach:

• Create and use stories and examples from BCRA projects that connect with client needs.

• Ask questions that uncover what is important to the potential client or referral.

• Build effective BD habits and figure out how to find time.

• Conduct conversations with contacts about their needs and concerns, not just about how great BCRA is.

Each team had eight minutes to present their idea creatively — no long speeches, no lectures, no PowerPoint. Sets, costumes and humor were encouraged. A useful summary of key ideas had to be distributed to the audience at the end of the eight minutes.

Management offered a substantial amount of prize money for the best presentation. Suddenly teams were huddled behind closed doors with DO NOT DISTURB posted on the outside. Rehearsals were scheduled on Sunday mornings. Of course, sets were built first — after all, these are architects and engineers!

Who were the judges? The panel consisted of 20 junior staff who needed BD training in the multiple markets that BCRA serves. Yes, you read that right. The professionals who had joined the firm in the past three years — not the firm’s leadership — decided who won the prize money.

The criteria each judge used were:

1. Which team helped me understand and use their BD concept?

2. Which team was the most creative?

3. Which team was the most prepared?

4. Which team had specific information that I can use?

“Thunderdome helped create a common BD language with more people who may not have been a part of the previous trainings,” said Justin Goroch, a senior associate and civil engineer who played the role of Jim Halpert in his team’s skit based on TV sitcom “The Office.”

What were the other benefits? The activity expanded the seller-doer model because those who knew how to develop business were forced to explain what they do and why to their co-workers.

Landscape architecture lead Jon McNamara said, “Writing up the questions that I would ask my client about his upcoming project was really helpful. And even though I initially thought the event would be corny, it was actually the best training event I’ve ever participated in.”

The judges could connect the projects that they were working on now with the work that was required to build those trusting relationships initially. They realized that effective BD is more than simply going to networking events.

The judges also saw the considerable effort that senior staff took to make the event effective.

Engineer-in-training Ryan Baltazar commented, “They did all of this work to help us learn. Wow!”

What happened after the event?

From the event, market leaders emerged.

Stuart Young, one of the three managing partners, said, “We now have a common understanding of what we want to accomplish, and we often refer to a skit to make a point to ourselves.”

Accelerated learning is a complex process in which certain ideas are crucial to making the activity a success. Here are some tips:

• Learners must apply the concepts and skills, not just explain them.

That is why speeches and presenting general ideas through PowerPoint were not allowed.

• Offer a prize worth winning.

The energy changed dramatically when a big-dollar amount was available.

• Have creative and committed internal coordinators.

In this case, BCRA’s marketing and business development leads, Dara t’Sas and Gareth Roe, organized, encouraged and prepared the judges.

• Capitalize on the naturally competitive nature of smart professionals.

That is why everybody had a speaking part. Some of the best insights came from people who came forward only because they were required to.

• Don’t succumb to the natural excuse “we are too busy.”

When you mix fun, competitive spirit and money, technical professionals will find the time.

• Limit the firm’s leadership participation to appearing in cameo roles after the general approach is organized.

• Have a follow-up plan in place to build on the learning; measure results.

The market leaders from this program went on to get additional training and to lead teams.

Albert Einstein said, “I never teach my pupils. I only attempt to provide the conditions in which they can learn.”

Thunderdome provided the conditions to reinvigorate business development at BCRA. The event proved so successful that “Thunderdome: Part Deux” is in the works!