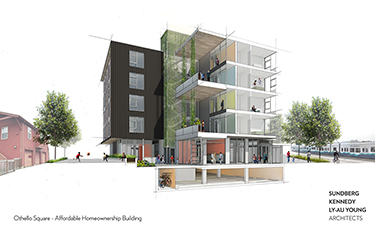 Rendering by SKL Architects [enlarge]
Othello Square is designed to be sustainable and feel like home, with community decks for growing food and socializing.

SKL principal John Kennedy answered questions from the DJC about his firm and trends and issues in the industry.

Q: What can architects, developers and government do to make Seattle more livable and sustainable?

A: The United Nations just came out with a report demanding “unprecedented changes” in the next 12 years to avoid catastrophic climate change. This was quickly followed by a report of larger-than-anticipated heat buildup in the oceans.

It is difficult to pay attention to this kind of news, and I am guilty of habitually clicking on the latest political outrage, but Seattle can definitely lead the way with government increasing taxes on fossil fuel energy use while simultaneously decreasing taxes on property, income and sales, similar to what was proposed by the defeated statewide initiative I-1631, but with more emphasis on the balanced reduction of existing taxes.

Architects and developers can follow suit by using our power as trendsetters to make walkability, bikeability and energy efficiency “what the cool kids are doing.”

Q: Which sector of your firm’s work has grown the most in recent years? Where do you expect growth in the next few years?

A: Our work spans multiple sectors, and typically involves adaptive re-use, energy efficiency and community-based design. Most of our recent growth has occurred in K-12 education, and we expect that to continue. Looking around our region, you see so many run-down, daylight-deficient schools that house dedicated teachers and staff trying to make a difference. It is amazing what can happen when the 1970s gets updated to 2018.

Q: You do a fair amount of public work. What trends or issues are you seeing in that sector?

A: The biggest trend we see is alternative delivery methods, specifically GC/CM and progressive design-build. We think it makes much more sense to have general contractors involved early in the process. It is a much more natural and enjoyable way to work — and allows the contractor to form a stronger, mutually beneficial bond with the community served by the building.

Q: How are rising land costs in Seattle affecting what gets built?

A: We work with a lot of nonprofits and rising land costs make it even harder for them to realize their vision and meet their community’s needs. As architects, we tend to focus more on rising construction costs, and the escalation that has occurred makes it harder to get projects designed and built intact. But, the cranes are still going up, projects get built, and we keep moving forward, just with a little extra editing and creativity.

Q: Your firm was forged in the last recession. How difficult was that?

A: Yes, it was a brilliant move to start a new firm to align with a recession, but having been in this profession for, let’s just say, several decades, we have seen it before, so we shifted to “scrappy” mode. For example, at the time, we were sharing space with Graham Baba Architects, and we would trade staff around depending on who had work, which also led to some great collaboration. In some cases, we even helped clients with some of their less skilled construction tasks — probably not the best idea, but it got us through.

Q: What’s a change you’d like to see in the industry?

A: One small change that’s been on my mind recently: I’d like to ask owners to limit short lists to three firms rather than five.

And a larger change: The “5 over 2” mixed-use model dictated in Seattle by the economics of zoning and building code seems uninspiring. I wonder if there is a 12-story mid-rise option that could work in some neighborhoods.

And a really big change: Figuring out how to design and build “net-positive” buildings as a matter of course, rather than the exception.