Until the early 1990s, the South Lake Union neighborhood was largely characterized by decades-old residential and light-industrial buildings that functioned somewhat inconspicuously in the shadow of Seattle’s vibrant downtown core.

Recent real estate cycles have brought about a collection of new buildings — everything from market-rate apartments and Class A office, predominantly for technology innovation, to life science and medical-research buildings — that have forever changed this burgeoning neighborhood.

The neighborhood’s wholesale redevelopment has come about in response to an expanding economy, increased demand for close-in space, and the ongoing densification of Seattle’s urban core. Like any changing community, South Lake Union’s new construction has been delivered in waves, with buildings coming online over several development cycles and in distinctive geographic areas, or clusters. The neighborhood’s growth reflects both intentional city planning and entrepreneurial developers meeting innovation companies’ seemingly insatiable appetite for skilled local labor.

For South Lake Union, most of the new development has taken place south of Mercer Street, to roughly Denny Way, and in between Interstate 5 and Ninth Avenue North. These boundaries represent an ever-expanding neighborhood with existing and future tenants including Amazon, Google, Fred Hutchinson Cancer Research Center, University of Washington, Center for Infectious Disease Research, PATH and many others.

In recent years, there has been an increasing amount of construction in a once-quiet sub-sector of the South Lake Union neighborhood. This area, Dexter Corridor, is just north of where most of the redevelopment has occurred to date, comprised of roughly 10 blocks of prime commercial real estate that’s quickly attracting some of the world’s top life science and tech companies. 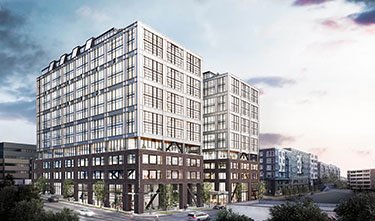 Images from BioMed Realty [enlarge]
BioMed Realty is developing Dexter Yard. It will have 515,000 square feet of office and lab space when it opens in 2021. 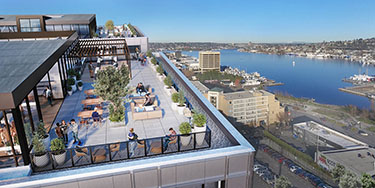 Firms like Facebook, Juno Therapeutics and Battelle, and research organizations such as The Bill and Melinda Gates Foundation, are coming to the Dexter Corridor to take advantage of its convenient access to freeways, restaurants, retail and public transportation. These industry and community powerhouses are also drawn by the area’s central location which, depending on the building, can offer 360-degree views of Lake Union, downtown, Elliott Bay and the Olympic and Cascade mountain ranges.

One of those buildings is Dexter Yard, a Class A project being developed by BioMed Realty, a provider of real estate for life science and technology communities. The project, between Dexter and Eighth avenues north and Roy and Valley streets, is due for completion in the third quarter of 2021. Dexter Yard will deliver some 515,000 square feet of tech-office and life science laboratory and office space, in addition to 25,000 square feet of ground-floor retail.

BioMed partnered with SkB Architects to create a building that respects the history and character of South Lake Union’s industrial past, while also developing a project that functions just as well for life science companies as it does tech firms. The building’s strategic design is being marketed to software developers, web-based companies, and life science and biotech firms looking for one of the last opportunities to lease Class A space in the neighborhood.

To that end, nearly two-thirds of all office space under construction in the Puget Sound region has been pre-leased, according to David Abbott and Laura Ford, executive vice presidents with Colliers International who are marketing the project for BioMed.

Dexter Yard has high-quality, technology- and laboratory-capable facilities with floor-to-ceiling clear heights and specialized electrical and plumbing systems. The project also offers flexible floor plates averaging 21,500 square feet and immediate access to on- and off-site amenities that are increasingly attractive to tech companies.

SkB’s design inspiration for the 15-story Dexter Yard project was centered around the history and character of South Lake Union’s industrial past, as well as the area’s ability to bring together people and companies with innovative, world-changing ideas. The Dexter Yard name reflects the project’s open, community-centric orientation: The building’s through-block connections and amenity space were designed to invite on-going activity and community engagement.

One of Dexter Yard’s most unique spaces is The Field House, a full-sized open athletic field that invites tenants and neighbors alike to play on site. BioMed and SkB envision The Field House being highly flexible, whether it’s used for soccer or ultimate Frisbee or just enjoying the space as a spectator. 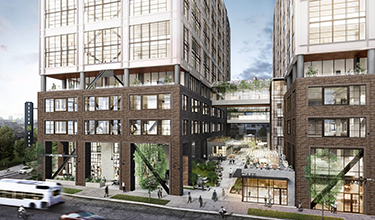 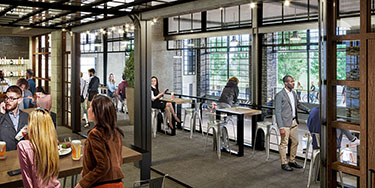 Dexter Yard is the latest in a growing portfolio of BioMed’s commercial developments in the Seattle area. The company — which owns and manages Vue Research Center at 307 Westlake and the Omeros Building — believes there’s strength in numbers, particularly when it comes to the successful operation of tech and life science firms.

Many of these users have already moved their operations to the Dexter Corridor, with others waiting patiently for additional opportunities to become part of the area’s growing concentration of innovation-based neighbors.

One of them, University of Washington, has invested heavily in the South Lake Union neighborhood already, with the final building of its multi-phase medical-research campus slated to break ground near Dexter Yard in 2020.

The Dexter Corridor is a place where creative people and their ideas frequently “collide.” At first glance, it could seem that having multiple technology and life sciences companies near each other could lead to unhealthy competition. But BioMed and its construction partners believe the opposite is true — having competitive firms, educational institutions and research organizations near one another encourages growth.

Collision spaces also spur new ideas and creative thinking, which are critical activities for the health and prosperity of the Dexter Corridor and other innovation hubs.

When Seattle’s earliest settlers arrived along the shores of Lake Union in the 1850s, they could not have possibly imagined what the neighborhood would become some 150 years later. Today, South Lake Union is a thriving, sophisticated mixed-use community where companies are discovering therapies to treat some of the world’s most challenging diseases and creating new technologies that are reshaping our business and residential communities and transforming our lives.

Many of these firms are becoming part of the fabric of the Dexter Corridor, a fast-developing innovation hub where projects like Dexter Yard are poised to support collaborations and idea exchanges — as well as a place to live and play — that will offer new promise for generations to come.

Mike Ruhl is the vice president of leasing at BioMed Realty, which is developing the Dexter Yard life science and tech building in South Lake Union. Ruhl works in the Seattle office.