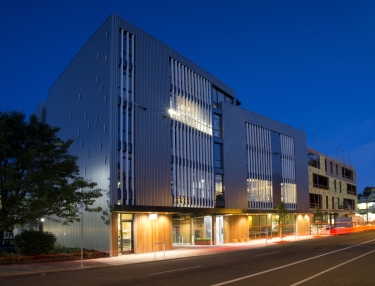 Photos from Kaiser Group [enlarge]
The Radiator building in Portland has three earthquake sensors buried about 12 feet deep at the corners.

Kaiser Group of Portland installed a system in an office building in the city to warn tenants of an earthquake.

The system is in the company's recently completed five-story, 36,000-square-foot building called the Radiator at 3530 N. Vancouver Ave.

The system was developed by Weir-Jones Group of Vancouver, B.C., and uses three sensors buried about 12 feet deep at the corners of the building. The sensors detect the initial P waves that are produced by a quake before the damaging, but slower, S waves hit, according to Benjamin Kaiser of Kaiser Group.

A monitor in the lobby shows readouts from the sensors, which can detect any motion, such as a passing truck. In a quake, the monitor would show lots of motion, and tenants would be alerted by text, whether they were in the building or elsewhere, Kaiser said. The building's elevators would return to and lock on the first floor, and the gas main would shut off.

The tenants also get tips on how to take cover.

“If you're in a masonry building in downtown Portland we suggest leaving,” Kaiser said.

The firm paid $75,000 for the system. It plans one in an eight-story, 14-condo building it will start in about a month at Williams Avenue and Fremont Street in Portland.

Such systems give people seconds to a minute and a half to take cover; 70 seconds in the Radiator building if the earthquake emanates from the Cascadia fault, Kaiser said.

“It's certainly been a selling point,” he said, especially in light of the recent New Yorker article subtitled “An earthquake will destroy a sizable portion of the coastal Northwest. The question is when.”

Passersby have come to look at the monitor, but one tenant was worried its presence meant the building was at higher risk of damage in a quake, Kaiser said.

The Radiator was built to the latest seismic code, which makes that unlikely, he said.

The system was installed in the Radiator to encourage a conversation about how early warning combined with creating seismically safe areas in older buildings could be more cost effective than extensive retrofits, Kaiser said.

The Kaiser Group and Paul Conway, an Arizona-area real estate investor, have started a company called CoreFirst to sell and install those seismically safe areas, and have been talking to local schools about buying them. The price would include an earthquake early warning system.

According to Kaiser, CoreFirst would provide protection from earthquakes and other natural and man-made disasters by creating a stronger structure than with a full seismic upgrade inside the building. CoreFirst “sanctuaries” would be the building's lateral stability feature, so they could be the first phase if a full upgrade is done later, he said.

Kaiser Group was founded in 1999. It specializes in designing, developing and building multifamily and commercial projects in Portland. Benjamin Kaiser is a registered architect and general contractor in Oregon, he said.

The United States Geological Survey is developing an earthquake early warning system for the West Coast of the continental U.S., where quakes are most probable because of the large number of faults, said Joan Gomberg, a USGS research seismologist. 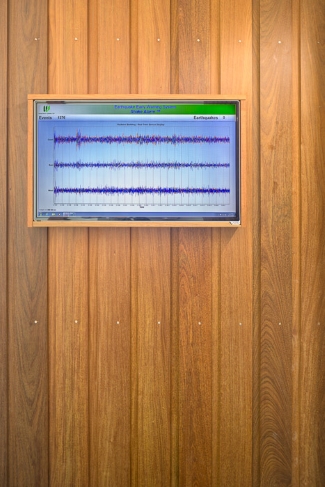 [enlarge]
Seismic activity is displayed on this monitor in the lobby of the Radiator.

The system, called ShakeAlert, will use a vast network of sensors to detect the earthquake's P waves, which travel slower than electronic signals from devices such as cell phones, which could be used to warn people.

The system will give people seconds to minutes to take cover, and transit, hospitals, airports, utilities and companies time to stop trains, surgeries, planes and shut off gas mains or ensure elevators are not stopped between floors, Gomberg said.

“There's a whole variety of things that can be done in a matter of minutes that can be life-saving, property-saving,” she said.

The sensors and related equipment are owned and operated by the USGS and its partners, which in the Northwest are the universities of Washington and Oregon. The Pacific Northwest Seismic Network monitors earthquakes and volcanoes in the Northwest through a partnership of the UW, UO and USGS.

John Vidale, director of the Seismic Network, said the 2011 9.0 earthquake and massive tsunami in Japan and funding from the Gordon and Betty Moore Foundation was the impetus for the Northwest to start developing the early warning system. California was already working on the software for the system and testing it.

Bay Area Rapid Transit is using the system, and a California school is testing it in a demonstration project. Vidale said the USGS would offer the alerts free to the public.

In the Northwest 40 groups, from Boeing, Microsoft and Amazon to hospitals, transit agencies and cities are testing the system.

“We want to make sure it's working properly, and there's still some things we're tuning up,” Vidale said.

The project is only-half funded, and state agencies charged with informing the public about the system need the resources to do so, he said. However, the goal is to have ShakeAlert operational in one to two years, he said.

Vidale said on-site early warning systems sold by private companies don't work as fast or as accurately as a network of sensors, unless the quake is near the building. Then they can be a second or two faster because the data doesn't have to be passed back and forth on miles of transmission lines.

Gomberg said some places have had earthquake early warning systems for years, from Japan to Mexico City and even Romania.

Vidale said the alerts will likely be sent to the public via cellphones, like Japan does, and by siren in areas with more hazards, like Pioneer Square.

Benjamin Kaiser said the USGS may not have a robust, trustworthy ShakeAlert system operational for years.

He envisions private developers installing earthquake early warning systems in their buildings — creating a network of sensors — and alerting public schools for free.