Shotcrete helps restore a school that went up in flames

When a catastrophic fire destroys a historic school building in the middle of a seismic retrofit, extraordinary design and construction measures are necessary.

This is especially true when the building is so beloved by community members that they want to reopen in less than two years, all while preserving the character of the building and minimizing the visual impact of the demolition and construction process.

Reid Middleton had already designed a seismic retrofit, and construction was under way in November 2009 when fire destroyed the roof and interior, causing severe structural damage to Whatcom Middle School, the oldest school in the Bellingham Public School District. The company worked with the design-construction team to evaluate the condition of the building, and developed an unusual recovery approach that allowed the school to reopen for the 2011-12 school year, just 22 months later.

Rather than repairing and upgrading the building remains, the existing building was used as a mold for construction of a new reinforced-concrete exterior wall outside the original building, and the damaged interior was replaced with new concrete and steel from the inside out.

This option was made possible in large part by the versatility and performance qualities of one of the predominant materials used in the rebuild: concrete. Concrete, in various forms, offered multiple solutions to the project goals in terms of construction process and material. 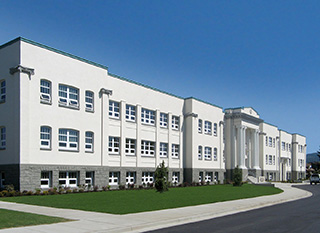 Photo courtesy of Dykeman [enlarge]
The reinforced-concrete exterior wall was designed to look like the original facade.

The original Whatcom Middle School was built in the early 1900s with construction materials common to the time: concrete and stone foundations, hollow clay tile and brick masonry walls, and wood framing. After considering a host of options for building a new structure that would look and feel like the original, the decision was made to use the same materials in modern applications.

Shotcrete, concrete conveyed through a hose and projected at high velocity onto a surface, is commonly used in seismic retrofits in a limited volume. You might expect to see it applied in 6-foot panels, not large-scale applications like 30,000 square feet of continuous exterior wall. The new school exterior wall was constructed entirely of shotcrete, making this an unusually large application of shotcrete, by volume.

The versatility of concrete, coupled with the shotcrete delivery method, made replicating the architecture of the original school financially achievable and allowed the iconic main entry to be preserved in place. The original building had a cut-stone foundation and facade halfway up the first-floor stone walls.

One of the design challenges was replicating the character of the original building. To achieve this, craftspeople worked quickly after the shotcrete was placed to create a carved-stone appearance before it dried. True craftsmanship was used in this process. Each “stone” was individually designed so that no two were exactly alike, as would be the case if real stones were used.

The intricate tooling of the shotcrete concrete created natural-looking stonework (cornices, archways and outcroppings) that was full of details and features closely matching the stonework of the original building. The original terrazzo floor was replicated with colored concrete, with the surface ground to expose the aggregate matrix. 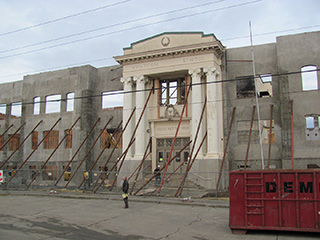 Photo courtesy of Reid Middleton [enlarge]
The original school entry was salvaged from the fire and incorporated into the new concrete walls.

In addition to its role in the aesthetic features, ready-mix concrete was integral to solving the time constraints on the project.

• The flexibility and versatility of concrete made the design solution possible, allowing the team to meet the expedited schedule, saving labor and material. It’s estimated that this approach saved three months of production time.

• Large areas of concrete flooring were placed and immediately provided other construction trades access for interior construction and finishing.

About half the cost of typical concrete construction is associated with the temporary formwork required to construct cast-in-place concrete. Because the exterior shotcrete walls used in the school replacement were constructed using the existing damaged walls as formwork, the throwaway forms normally required were not needed.

Concrete offered a flexible material that could be crafted and molded to retain the cherished architectural features of the original school building, all designed to a high level of seismic performance. The new exterior wall not only has the look of the original building, it also supports the interior framing, both laterally and vertically.

The original main entry was constructed with weak hollow clay tile bearing walls and weak terra-cotta columns. In order to preserve the original construction, a combination of various seismic retrofit technologies was employed to strengthen the archaic construction materials without compromising their original aesthetic. The entry was salvaged in position and assimilated into the new concrete walls.

Shotcrete was installed behind the main entry to strengthen the hollow clay tile walls. The columns were cored and filled with the structural steel and flowable grout to increase their gravity and lateral strength.

Whatcom Middle School reopened in September 2011, less than two years after the fire. It has been celebrated as a successful project by community members and building tenants alike.

Rigorous attention to detail and aesthetics paid off. From the exterior, the building appears nearly identical to the original building. However, everything is refurbished and vibrant, almost as if time-traveling back to opening day in 1906.

Kathleen Baxter is a marketing coordinator at Reid Middleton. Erik Bishop is a structural project designer.