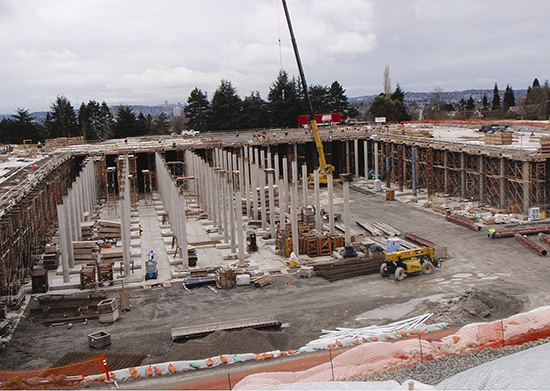 
The Maple Leaf Reservoir is the largest of four open reservoirs to be replaced under Seattle’s reservoir-burying program.

The underground structure is a 60 million-gallon, all-concrete reservoir that’s been divided into two cells by an interior concrete wall. The separate cells allow the city to drain and clean one half while the other half is in service.

Inside the cells are 768 cast-in-place concrete columns. The surrounding concrete walls are 22 inches thick and 21 feet high.

Construction involved placing more than 31,000 cubic yards of concrete and 4,500 tons of reinforcement steel. There were around 260 individual concrete placements. A seven-day curing period was required between each of the concrete pours.

Demolition of the old reservoir generated more than 10,000 cubic yards of crushed, recycled concrete for road base.

The site also has a cast-in-place pump station and an elaborate concrete-contained bioswale system for stormwater management.

Although the reservoir was completely buried, the finish of all the concrete elements was still critical. The general contractor used its own personnel to place and finish all the concrete, allowing the contractor to fully control the process and meet stringent quality standards.

The design team applied an architectural finish to reduce unnecessary surface areas. Excess surface area allows the formation of debris and bacteria, which is undesirable in a storage facility for potable water. It also makes it harder for maintenance crews to clean.

A 16-acre park now sits atop the covered reservoir.