Concrete’s strength, visual impact and durability are clearly expressed at Renton Memorial Stadium, where the 1947 structure has withstood the test of time, even after a renovation.

Aesthetically, concrete is the essence of the stadium’s mid-century modern architecture and it also plays a front-and-center role for the redesign, allowing us to maintain the building’s original form for facility improvements and provide the structural improvements needed to meet current seismic codes.

Renton Memorial Stadium plays host to thousands of visitors each year, and undergoes an immense amount of wear and tear. 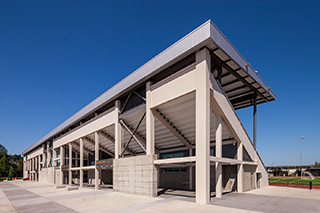 Photos by Jeff Amram Photography [enlarge]
The concrete shear walls were originally supposed to be painted, but the project team decided to use clear sealer coat instead and keep the smooth, natural finish.

The stadium is used by Renton School District for football games, major track and field meets, and lacrosse and soccer matches. It also serves the greater community for a variety of public events and is the occasional practice field for the Seattle Seahawks.

Although the stadium has seen a few minor renovations in its history, the new design fully modernizes ticketing, concessions, toilet rooms, locker rooms, offices, maintenance and storage, while creating a sophisticated new face that significantly upgrades its street presence. Our goal was to create a durable, enduring design that users can enjoy for another 65 years.

Concrete was chosen as the dominant exterior material to maintain the integrity of the existing building and its strong structural expression.

To meet current seismic and lateral loading requirements, several of the concrete columns required dense jackets of additional reinforcements. Rebar cages were tied to epoxy dowels set in the original concrete, generally at 8 inches on center.

The height of the columns and the high density of rebar necessitated the use of self-consolidating concrete pumped into the formwork from a port at the base. A side effect of this mix and pumping method is a remarkably smooth and consistent finish. The large concrete shear walls along the south face of the building were formed and poured in a similar manner.

The design documents had scheduled these shear walls to be painted over, but the natural finish and texture turned out to be so pleasing that the architect, owner and contractor agreed to leave these walls exposed, with only a clear sealer coat. The end result kept the stadium’s character and enhanced the structural expression of the building. 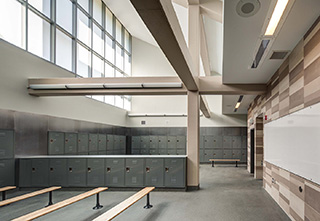 [enlarge]
The locker rooms were modernized, along with ticketing, concessions, offices, restrooms, maintenance and storage.

Down at grade, portions of the existing suspended slab were removed, revealing an existing subgrade that had settled as much as 1 foot below the bottom of the slab. All below-grade plumbing lines had to be suspended from the new slabs to guard against the effects of future settlement. Because of these poor soil conditions, the 28,000-square-foot arrival plaza was poured as a fully reinforced 8-inch concrete slab, with a pattern of colored and textured concrete to guide crowds of spectators to their seats.

Concrete also provided the perfect backdrop for the stadium’s colored LED lighting system. Because the stadium is called “home” by different schools, materials were developed to omit any team colors. Located under the home grandstand, the lighting system can be programmed to wash the white concrete with home-team colors, imbuing a sense of ownership and simultaneously announcing activities to the community.

The sustainable strategy was to reuse as much of the existing building as was feasible. While most of the ground-floor unreinforced partition walls had to be replaced because of structural and programmatic needs, the main structure remained.

Large sections of transom windows were incorporated in the completely renovated building to maximize natural daylight. The building envelope was fully upgraded to exceed current energy codes. High-efficiency boilers were used for central heating and, aside from the playing fields, all exterior lighting comes from LED lamps, providing ultra-long-lasting, energy-efficient and glare-free lighting.

With large and excitable crowds, it was important to use durable materials and finishes that could be easily cleaned. Concrete, concrete masonry, cement plaster, porcelain tile and prefinished metal siding are low-maintenance, cost-effective, attractive and able to withstand heavy spectator traffic. Renton Memorial Stadium will remain a delightful and iconic facility for many generations.

Rick Huxley is a principal and architectural designer at Bassetti Architects.