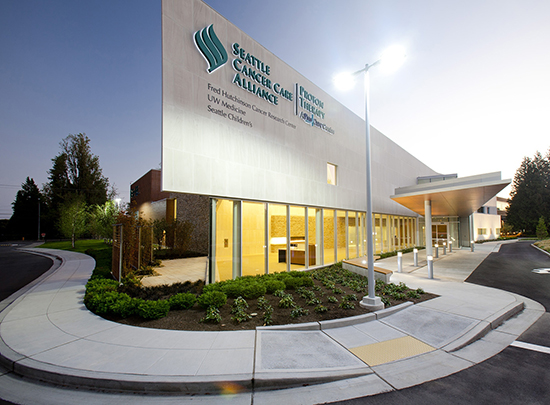 Photo courtesy of WACA [enlarge]
Around 16,500 cubic yards of concrete were placed for this cancer-treatment center in Seattle, including for radiation-shielding barriers up to 14 feet thick.


A two-story, 54,000-square-foot concrete cancer-treatment center was built on a 2-acre site on the Northwest Hospital & Medical Center campus in Seattle. The ProCure proton-therapy facility, developed in partnership with the Seattle Cancer Care Alliance, is the first in the Pacific Northwest to offer proton therapy to cancer patients.

Proton therapy can more accurately target tissue needing radiation exposure than standard X-ray treatment, so radiation of healthy tissue is minimized. Using a cyclotron, protons are accelerated and delivered to patients for treatment.

Once constructed, it took a year to install and calibrate the equipment, including the 220-ton cyclotron, which required a heavy concrete structure to support its weight.

The project posed special challenges from the design and construction team:

• The structural engineers designed concrete shielding walls and decks ranging from 5 to 14 feet thick. The size of the shielding elements was calculated based on the density and thickness required to contain high-energy protons. “Key ways” were placed in the concrete construction joints to ensure protons were properly contained. A zigzag-shaped concrete entry maze to the treatment areas provides additional containment of protons.

• The bunker required a special concrete mix design to achieve consistent density that exceeded 150 pounds per cubic foot — the technical requirement for the building’s function, except between the cyclotron and the fixed-beam room, where concrete density was required to be higher. To avoid cracking and to control the temperature gradient during placement of the thick walls and slabs, cement volume was reduced and fly ash and ground granulated blast-furnace slag were added.

• High-density aggregate was specified for the shielding wall between the cyclotron and fixed-beam room. The required mix produced a concrete density of 250 pounds per cubic foot by using fine and coarse aggregates with a specific gravity as high as 4.95.

• The structure was a new prototype design adapted to meet local seismic requirements. Though the bunker was designed only to hold and contain the proton therapy equipment, it was so massive that it easily provided seismic bracing for the entire building.

• Structural engineers worked closely with the general contractor to accommodate their concrete pour sequence. With planning and coordination, the structural concrete work was completed six weeks ahead of schedule.