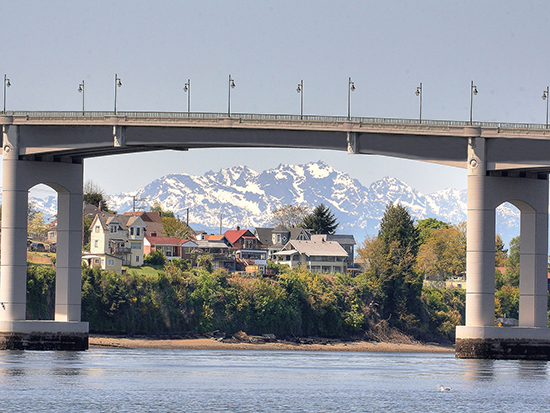 The Manette Bridge replacement project in Bremerton was unique and challenging in several ways. It replaced an 80-year-old steel truss bridge that was very important to the city and neighborhoods it connects.

Bridge aesthetics were very important to this historic U.S. Navy shipyard community since the existing bridge was an important local landmark. Locals were adamant they did not want a typical highway bridge and strongly resisted chorded haunches like a nearby bridge.

In order to maximize the amount of construction that could be done with the existing bridge open to traffic, unique opposing-tendon anchorages in the hammerhead segments were utilized to allow span-by-span stressing. This detail resulted in only the west abutment and first span of the new bridge needing to be constructed during the 4.5-month closure period.

The use of cast-in-place, precast and spliced concrete elements provided an architecturally pleasing, economical bridge that minimized closure time.