Images from Lever Architecture [enlarge]
Designers expect to use cross-laminated timber, glu-lam beams and glu-lam columns to build the 12-story Framework project. The superstructure will be supported by a reinforced concrete mat foundation.

For Thomas Robinson of Lever Architecture, the construction industry's adoption of mass-timber tall buildings is not a question of if. It's a question of when.

“I don't think it's a matter of mass-timber construction catching on,” said Robinson, a principal with Lever Architecture. “It's a matter of how far will it go and how quickly will we adopt it?”

Lever Architecture is in the early design phase of a 12-story mass-timber building called Framework in Portland that would be the first of its kind in the country.

Although mass-timber, also known as cross-laminated timber, is a relative newcomer to the U.S. construction market, in Europe, Canada and Australia the mass-timber design caught on in the mid-1990s, Robinson said.

The movement has spawned smaller projects around the U.S. and Northwest, but the Framework project in Portland represents a leap in scale, at 130 feet tall with ground-floor retail, five office floors and five apartment floors.

Walsh Construction is the general contractor for the $30 million to $40 million project, and the engineers are KPFF's Portland office and Arup's Seattle office. PAE Consulting Engineers is the mechanical/electrical/plumbing engineer.

The developer is Portland-based Project.

Anyeley Hallova, a partner at Project, said the mixed-use Framework is the result of an industry “buzz” that cross-laminated timber (CLT) has recently generated in the Portland area.

Hallova said the decision to go with CLT for the 90,000-square-foot building was made jointly by Project, Lever Architecture and the project's affordable housing developer Home Forward of Portland. 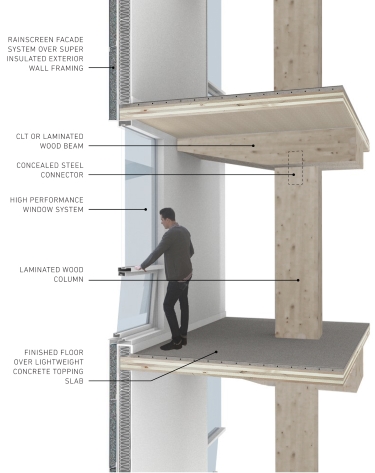 “We are thinking of the environmental impacts of the building and how to go above and beyond LEED,” she said. “It's a fresh, modern design combining technology and sustainability.”

Advocates for CLT in tall buildings say the benefits are a lighter carbon footprint compared with concrete or steel construction and better performance in a seismic event because of the smaller foundation loads.

“I'm very confident in it being a model for the future,” Hallova said.

In late September, Framework received a boost from the U.S. Tall Wood Building Prize Competition, which handed out $3 million for research on the Portland project and a similar project in New York.

Robinson said the use of CLT should benefit rural communities. “Some of the most productive forests in the U.S. are located in Oregon,” he said. “Washington has huge forest lands, as well, extending into British Columbia.”

He said the $1.5 million federal grant for the Portland project will be used for studying the building's structural systems and “establishing a regulatory framework for the project with the state and city of Portland.”

He added, “A lot of this hasn't been done in the U.S., so we need to be careful about studying what will be required.”

As a condition for applying for the federal grant, Robinson said the design team had to “reach out to the local (planning) authorities and get a letter from them saying they're supportive of what we're doing.” 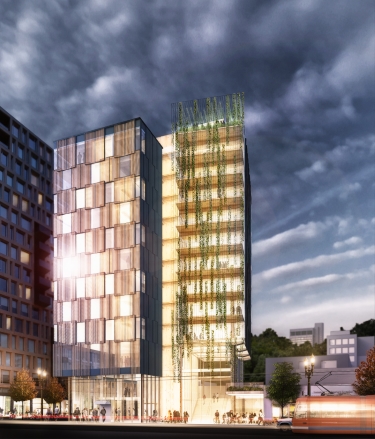 [enlarge]
Backers of Framework have a $1.5 million federal grant to study the building’s structural systems and help develop regulations for CLT.

Robinson said the key to the CLT design is using massive timbers that are laminated to each other in alternating directions, pressed together with thousands of pounds of pressure and further held together by high-strength adhesives.

But, he said, while wood is the primary structural element, “It's not just an all-wood building. There will be a concrete foundation.”

While there have been basic design principles used in mass-timber construction in Seattle and Portland — in the form of five-story warehouse buildings from the early 20th century — the new CLT design harnesses technology that can take smaller-dimensional timber and build them into large beams or columns.

Robinson said the Lever Architecture design team will “definitely plan on learning as much as possible from what other architects are doing” on similar projects in countries such as Norway and England. One of the largest CLT buildings, The Tree, was completed last year in Bergen, Norway, at a height of 160 feet (14 stories).

One major design factor will be ensuring the Framework project adheres to national and local seismic standards, Robinson said.

With construction slated to begin in October 2016 and finish in a year, Hallova said Framework will be a “socially responsible” building that will be home to both affordable housing and the Albina Community Bank — which she said “supports the underserved communities, such as minorities and small businesses.”

The 60 apartments will be workforce housing, designed for tenants making 80 percent of median income.

The building will be in Portland's Pearl District, known for high-priced condos and rental rates that are nearly 30 percent above Portland's median rates.

“Because rents are so high in Portland, there is a real gap between affordable housing and market rate,” she said, adding that the Framework project could serve firefighters and teachers.

“It's a mission-driven project, with a focus on social justice, economic opportunity and environmentally sustainable design,” Hallova said. “It will be great for the economic vitality of the Pacific Northwest.”

Robinson said it will also have a positive impact on CLT construction in the Northwest.

“The project is meant to be a catalyst for mass-timber construction and will embrace regional sustainability practices,” he said. “We want it to be a beautiful building, expressive of local materials and a place people want to come to visit.”