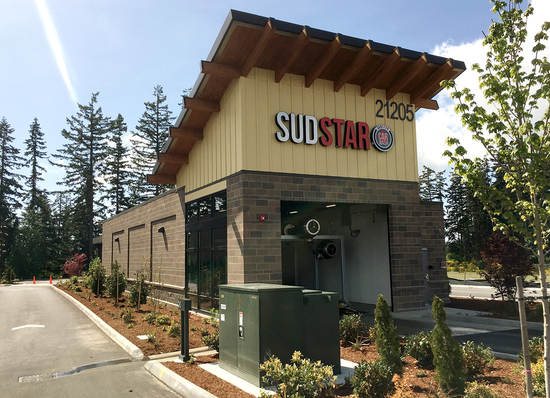 The commercial real estate broker who sold the 3-acre property for Poulsbo Retail to the developer recommended Donovan Brothers to build the retail complex. A car wash and major tenants Starbucks and AT&T had already signed leases, necessitating the contractor to coordinate the requirements of each tenant’s space needs.

The project’s completion date was driven primarily by Starbucks’ grand opening set for late March 2016. Unfortunately, construction wasn’t started until September 2015, causing Donovan Brothers to miss the mild, dry summer months and build the project in one of the wettest winters in Washington’s history. The wet weather presented great challenges to site work and construction. Both Starbucks and the car wash required vaults and utilities, and when installed, the vaults filled with water and required dewatering.

The finished wood-frame structure has CMU veneer and Hardie lap siding. Board and batten siding was installed in accent locations. Two towers with exposed glu-lam beams were built at the Starbucks and the car wash. Donovan Brothers self-preformed the placement of the glu-lam beams for the towers.

With effective planning, communication and scheduling, the project was completed early and within budget. There were no time-loss or medical injuries during the 2,872 hours worked.