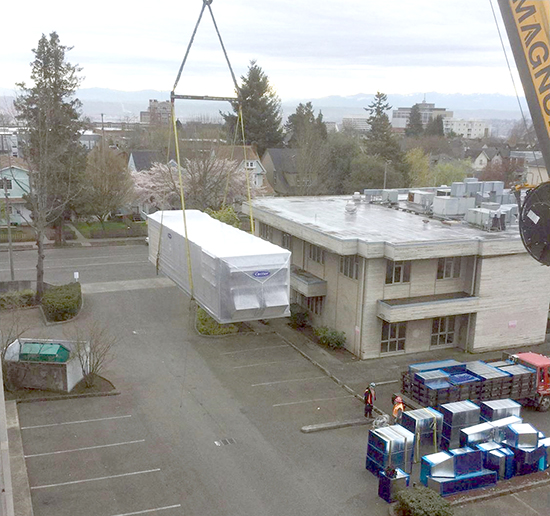 Photo from Air Systems Engineering
New HVAC equipment was lifted to the roof.

Since then the building was leased to new tenants and the spaces have undergone massive floor plan modifications. In addition, the ownership of the building had changed and the new tenants hired a general contractor that used a different mechanical and controls subcontractor to do the tenant improvement work.

Air Systems Engineering negotiated with the new owners to replace the primary HVAC systems and front-end controls system, which mandated a good deal of coordination between the mechanical and controls contractors performing the tenant improvement work.

The project was a perfect application for the design-build process as it would minimize potential delays and Air Systems Engineering would have the flexibility to work in alignment with the TI contractor. As Air Systems Engineering has been the key service provider for the building, it ensured that all details were covered and allowed everything from critical lifts to the controls integration of the new tenants to be streamlined.

The field team’s prefabrication of the larger roof-mounted duct systems helped speed the installation up so that none of the tenants experienced any downtime. The success of this project has led to many addendums to the preexisting maintenance agreements, as well as future construction opportunities.

There were no medical or time-loss injuries during the 1,021 hours worked on the project.