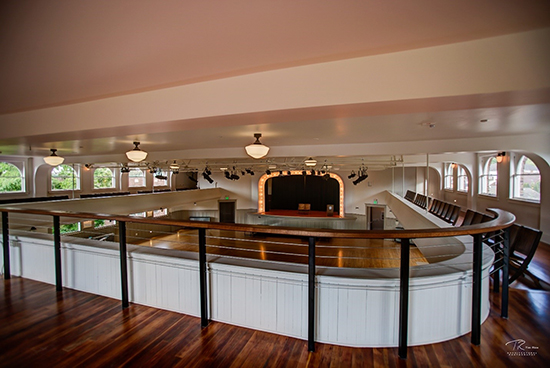 Washington Hall was built in the early 20th century as a fraternal lodge and dance hall. Located in Seattle’s Central District, it was used over the years as a center for social and cultural activities for various ethnic groups, as well as a music venue for such artists as Billie Holiday, Duke Ellington and Jimi Hendrix. The hall fell into disrepair over the last two decades, and to save it from possible demolition, Historic Seattle, with the help of 4Culture, purchased the building in 2009 and set an ambitious course to renovate the building.

The $9.9 million project has been supported by city, county and state agencies, local foundations, and corporations and individual donors, culminating in November 2015 with a $968,000 grant from King County and 4Culture’s Building for Culture program. Restoration incorporated seismic upgrades that include a new roof and securing the south wall. The hall is now fully accessible with the addition of an elevator. Floors were refinished, the stage was enhanced and new lighting was installed.

SKIS Painting started work after the building was stabilized and the roof replaced. As is common with historic renovations, as the project evolved, the scope was ever-changing to meet new challenges that arrived almost daily.

Raw and unsealed surfaces were primed, and the existing trim was sanded to ensure proper adhesion and to remove the runs and fat edges from previous paint jobs. One unique challenge was to stain and apply a clear coat to some newly installed fir adjacent to some very old trim, requiring Skis to apply numerous light coats of amber shellac until the colors matched.

The paints used in this project were chosen for versatility, durability and ease of application. They also have great gloss retention, are easy to clean, and have excellent mold and mildew resistance. To ensure compliance with both the client and PDCA standards for a properly painted surface, samples were made and submitted for approval. Due to the age of existing walls and trim, the SKIS team made multiple other samples on site to develop a benchmark.

One challenge was painting the 30-foot-high auditorium ceiling using rolling scaffolding. The lead painter painted from the scaffolding platform while a ground crew moved the scaffolding along and ensured that the floor was clear of obstacles. The hanging stage lighting, which was badly rusted, had to be cleaned, primed and painted as part of the ceiling painting.

The entire project required precise planning and coordination with other trades to facilitate a smooth work flow. Despite the numerous challenges, SKIS completed the project on time and within budget. There were no recordable incidents or injuries in the 2,040 hours worked.