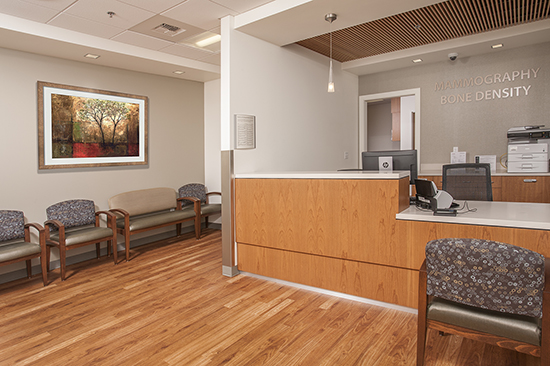 After learning that Donovan Brothers had developed the site, built the shell, and completed a number of other tenant improvements in the Franciscan Medical Pavilion in Auburn, Franciscan asked Donovan to bid on the contract to build out a 1,600-square-foot space.

The technologically advanced facility offers state-of-the-art 3-D mammography screening and DEXA bone imaging scans. The primary function of the clinic is to provide early detection of cancer while creating a more comfortable and efficient screening experience for patients.

Donovan began work in December 2015 and had to finish by May 10, 2016, when the first patients were scheduled for appointments.

Luxury finishes and specialty equipment added to the complexity of the project. Level four gypsum wallboard was installed throughout and bathrooms were hand-tiled. A Douglas fir slat ceiling was installed above the reception desk, which has quartz countertops and facing. LVT plank flooring was installed and plastic laminate faux wood cabinetry was used throughout.

Donovan also installed all of the medical equipment, including the DEXA and 3-D mammography machines.

Donovan completed the project on time and on budget. There were no medical or time-loss injuries in the 1,427 hours worked.