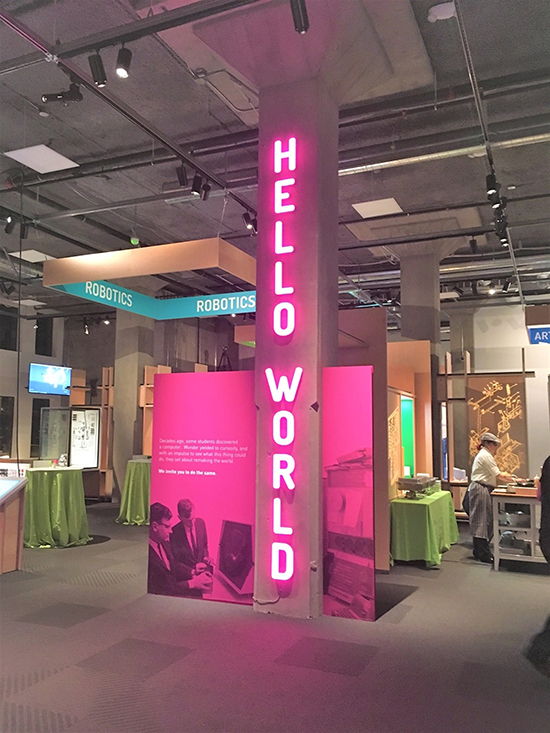 Photo by Dario Impini Photography
This LED sign was added during the final stages of the project. Since no control circuit was planned for it, SME staff suggested using a wireless controller.

SME Inc. of Seattle has worked with the Living Computer Museum on a number of projects, dating to early 2012. The final phase of this project was the buildout of the first-floor museum space that contains exhibits on robotics, video game creation, self-driving cars and virtual reality.

SME began the project by demolishing the existing electrical and then installing surface-mount branch conduits and boxes. Second was installing ceiling supports for data cabling and fire alarm, and supports for the unistrut grid system — both of which had to be completed before acoustical spray insulation could be applied on the ceiling.

As a design-build project with a fast start, the electrical drawings were still in design during the initial stages of the project and evolved as the museum exhibit spaces developed.

This was a first-of-its-kind museum so SME, the general contractor, design team, project owner and museum staff met continuously to flesh out the design requirements and ensure that the team was in-sync in the rapidly changing exhibit environment. As museum staff solidified their exhibit plans, SME commenced with routing pathways for power and lighting without a completed design, and developed the mission-critical lighting control plan that need to be flexible as exhibits would change.

The contractor removed a non-working elevator and installed a stairway to connect the first and second floors. The centerpiece of the stairway is a custom blown glass light fixture, designed and built by Julie Conway from Illuminata. SME worked closely on site with Illuminata to create the artistic look that the museum sought. The challenges and design modifications delayed the installation, allowing SME only three days to erect scaffolding, install the fixture, and remove the scaffolding as the museum was already open.

Near the project’s end, the museum asked SME to install the featured “Hello World” LED letters that are noticeable upon entering the space. Because the sign was unplanned, there was no control circuit for it and SME’s field staff suggested using a wireless control device that receives a signal from the lighting control panel. This elegant solution provided what was needed to automatically operate the LED letters.

SME’s experienced superintendent and open lines of communication between all of the design, construction and museum staff resulted in a successful on-time delivery despite numerous additions to the project scope. There were no medical or time-loss injuries during the 7,187 hours worked.