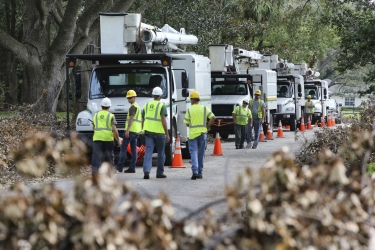 Joe Burbank/Orlando Sentinel via AP [enlarge]
Workers from Wolf Tree in Chattanooga, Tenn., arrived Tuesday in Maitland, Fla., where some streets were still without power more than a week after Hurricane Irma struck.

TALLAHASSEE, Fla. — After a massive restoration effort, most of Florida has power 10 days after Hurricane Irma knocked out electricity to nearly two-thirds of the state, mostly because of improvements made to the power grid since Hurricane Wilma 12 years ago.