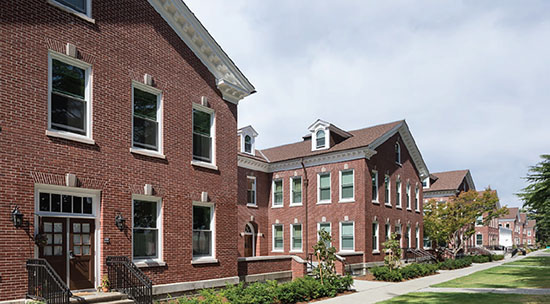 Photo courtesy of ABC
Mercy Magnuson Place, previously known as Building 9 at Sand Point, is an adaptive reuse project on a massive scale.

This project involved the renovation of a 1930s-era, former barracks building on the old naval station in the Sand Point neighborhood of Seattle. It contains 148 units of affordable housing, the Denise Louie early learning education center, and a Neighborcare Health community health clinic.

Mercy Magnuson Place, previously known as Building 9, is an adaptive reuse project on a massive scale. To take an 800-foot-long building that was built almost 100 years ago and turn it into a thriving community center was no easy feat, but add in the fact that it is in a historic district and within a city park and you have a project that doesn’t come around very often.

The first steps toward rehabilitating this historic building were to abate, demolish, and remove several decades worth of rotted, damaged, and neglected building materials. Demolition was carried out carefully to adhere to Landmarks Board, Washington State Historic Preservation Office, and National Park Service requirements.

The renovation portion of the project included preserving, restoring, and repairing significant historical features such as windows, doors, and dormers, to ensure that the character of the building was maintained. The building’s seismic stability was upgraded by incorporating new steel brace frames and concrete shear walls. New roofing and windows completed the exterior renovation.

During the apartment and support space build-out, efforts focused on improvements to accessibility (full ADA accessibility), energy efficiency (updated to current energy codes), interior lighting and ventilation, and new building systems, all with limited alteration to the building’s historic exterior. A substantial amount of insulation was installed to bring energy efficiency up and new mechanical systems were incorporated to bring operating costs down.

Remarkably, construction was completed in 23 months and within budget, and the National Park Service Part 3 approval was issued without comment.

This project had a large community impact. Over the 23 months of construction, the project brought over 800 different construction workers to the area, eating at local restaurants and supporting local shops. Additionally, with a total construction cost of over $58 million, a large amount of money was directed towards this neighborhood of Seattle during the construction of the project. Specific to diversity outreach, over 12% of contract dollars, or roughly $7.4 million, was awarded to WMBE subcontractors, providing those companies with meaningful opportunities to participate in this project.