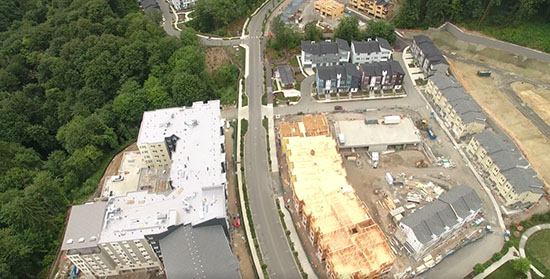 Photo courtesy of ABC
The project was designed to give each resident of the community a place to live, work and play.

Originally a coal mine in the early 1900s, then a brick production facility in the 1950s, Avalon Newcastle is now a place that many Pacific Northwest residents call home. With the property consisting of 53 acres of lush green forest adjacent to grocery stores, city hall, and a golf course, there is no shortage of activities and resources within walking distance. From start to finish Avalon prides itself in the successful implementation of the overall creative vision of the project.

The story and inspiration surrounding the artwork and design at Newcastle stemmed from research and work with local historical society members. The entryway was designed to show the “mountains to water” journey of coal transportation via train, from the base of Tiger Mountain down to Lake Washington. Benches placed throughout the community were designed to look like the weathered coal mining carts and set on tracks to look as if they were all rolling in unison. The materials and structural layout resemble the beams and forms used to shore up the mines to avoid collapse. Finally, the narrative and signage design were developed with the city of Newcastle to be in sync with other interpretive historical signs throughout the city.

As the project kicked off in April of 2015, it faced a unique set of problems. Due to the nature of the facility and its geographic location, innovative strategies were implemented to help improve production and meet deadlines. Because the site was originally a coal mine, the old mine shafts had to be identified and filled from the correct depth before work could begin. Open bottom culverts and bridges were also built out of lock and load walls so that work could continue throughout the year and prevent interaction with waterways during the wet and rainy seasons.

In addition, the overall idea of the project is innovative by itself, the way it was designed gives each resident of the community a place to live, work and play.