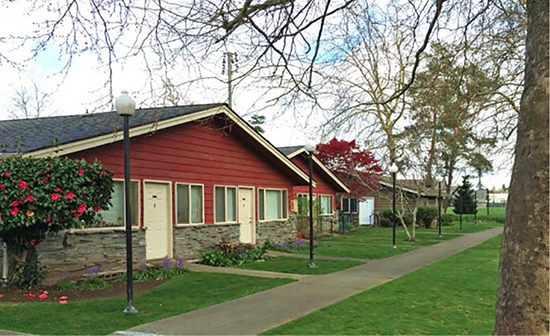 Photo courtesy of ABC
The Coronado Springs development was a remodel of 19 single-story apartment buildings.

The Coronado Springs development was a remodel of 19 single-story apartment buildings. Each building was a mix of four, six, eight, 10, 12 and 19 units, for a total of 150 units. As they were lived-in, each had a 30-day turnaround for a complete overhaul.

While most of the work focused on kitchens and bathrooms, all cottage units were taken down to the drywall. The units received new flooring and cabinets, as well as new toilets, sinks and tile surrounds. Air vents were cleaned and increased, and insulation was added. These measures help with temperature control. Ceilings were inspected and cleaned of asbestos as well. After the construction clean up, the walls and ceilings were given a fresh coat of paint.

Initially contracted for preconstruction in 2018, services included inspection of crawl spaces, attics and exteriors of every building, as well as select vacant units. From these inspections, pictures and written reports were provided to Bridge Housing and its consultants to aid in their planning. Upon being awarded the bid, Deacon was able to bring on its valued subcontractors and achieved over $800,000 in savings. These savings allowed Bridge to add items of scope to the project that were desired but initially outside of the budget.

The Coronado Springs apartments were fully occupied when the work began. This meant that all residents would, at some point, need temporary housing while their unit was being renovated. Due to occupancy, Deacon implemented a 30-day turnaround for each unit, which limited the number of residents temporarily displaced at the same time. To stay on schedule, Deacon created phases and steps to the renovation process. This meant that two new units were started every three days and at any given time, 12-16 units were in different stages of completion.

The initial plan was to move residents to off-site temporary housing but when the lockdown and new pandemic mandates were implemented, plans changed. The new COVID-19 protocols prevented the use of off-site units. Deacon adapted and made a push to complete units as residents were moved into open on-site units. As the remodeled units were completed, they were then moved back into their correct apartment. Even with the complications of COVID-19, Deacon was able to complete this project on schedule, in 15 months.

Affordable housing options are in high demand in the current market. By updating all units, this affordable housing group will be able to continue to serve the community for years to come without displacing residents. This project not only extended the longevity of housing, but the preconstruction and corrections of the findings gave residents a better living environment.