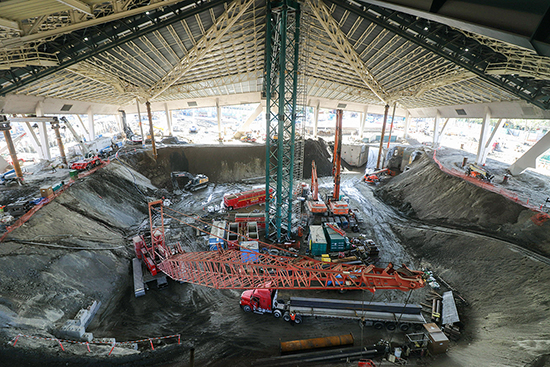 Photo courtesy of Mortenson
In order to more than double the size of the existing arena, the excavation had to be bigger and go deeper.

The iconic KeyArena building at the Seattle Center served the city of Seattle well since the World’s Fair in 1962, hosting concerts, professional sports, and much more, but it eventually became obsolete. In 2017, Oak View Group was selected by the city to build a new world-class arena at the site of the existing KeyArena, which was too small by today’s standards.

The new arena would be twice the size of the old one, meaning the current playing surface would need lowering and the area enlarged. Haley & Aldrich engineers and scientists worked with the ownership team, the structural engineer, the architect, and contractors to make the vision of Oak View Group and the city a reality.

When Oak View Group and the city were awarded a National Hockey League expansion franchise in 2018 to begin to play in the 2021-2022 season, scheduling and efficiency became a priority. In most cases, demolition of the old facility and construction of the new would have begun routinely. But for this project, there was one catch, the new arena had to maintain and protect the existing concrete roof. The unique roof and exterior cladding had become a recognizable part of the Seattle skyline, and in 2018 the city’s landmarks preservation board designated it as a historical structure that could not be altered. Architect Paul Thiry designed the roof for the Washington State Pavilion built on the Seattle Center grounds for the World’s Fair.

The engineers at Haley & Aldrich worked to solve never-before-encountered challenges to help design and build a state-of-the-art facility. Plans called for more than doubling the size of the previous arena while holding up a brittle roof weighing 22,000 tons and covering an area of nearly 200,000 square feet. Constructing the new building under the old roof was like building a world-class arena under a circus tent. What was more, the supports for the landmarked roof weren’t deep enough for the new structure. Constructing a new arena under its existing roof has never been done before, and each step of the project required new approaches to solving traditional problems.

To hold the existing roof in place during excavation required the design and construction of a complex temporary support system. The Haley & Aldrich team developed soil support and seismic loading criteria vital for more than just supporting the new arena. The requirements also allowed transitioning the roof weight from the shallow existing supports — to temporary roof supports during construction of the new building below — and finally to permanent foundations that were 60 feet lower than the original footings. To keep the roof stable during construction, the structural engineers determined it couldn’t be allowed to move more than ¼-inch between the supports. The team’s challenge was not just to support the roof but also to design and implement a monitoring plan to ensure it stayed in place and in one piece.

To monitor any roof movement, the team developed and installed an automated survey monitoring system to track any movements at 475 points on and around the roof every four hours and report them to the design and construction team.

The scale of the excavation is hard to visualize. The ice floor would be 15 feet deeper than the previous playing surface, already over 35 feet below the ground. But the extent of the excavation would dwarf the old KeyArena — and most excavations in Seattle — removing over 680,000 cubic yards of dirt. That is equivalent to three large Seattle city blocks excavated to a depth of 95 feet.

Under and around this fragile structure, the engineers guided the design. They oversaw the construction of more than a mile of excavation shoring and 187 temporary and permanent foundation drilled shafts to hold everything in place. Creating a space twice as large as the existing facility required 651 drilled soldier piles and 2,593 tieback anchors, all done under minimal roof clearance.

The tight schedule required several concurrent operations. During the shoring installation and with the excavation beginning, the team also began transferring the roof load to the temporary roof supports. These simultaneous activities required a large group of engineers and geologists from Haley & Aldrich and many other project engineers to meet daily. The teams shared huge volumes of information on daily activities to allow continued design, conduct tests, help the contractor schedule activities, and interpret all testing and monitoring results.

Building a world-class sports arena in less than three years in a busy downtown setting is a challenge in and of itself. Despite millions of dollars of enhancements added to the program during construction, Climate Pledge Arena, the first net-zero carbon professional sports venue in the nation, opened on time. The stands and the ice were ready for the first home puck to drop on the 2021-2022 NHL season opener featuring the Seattle Kraken versus the Vancouver Canucks on Oct. 23, 2021. This new showpiece facility is the home of Seattle’s National Hockey League team, the Kraken; the Women’s National Basketball Association team, the Seattle Storm; and will host countless other entertainment events for the Seattle region.