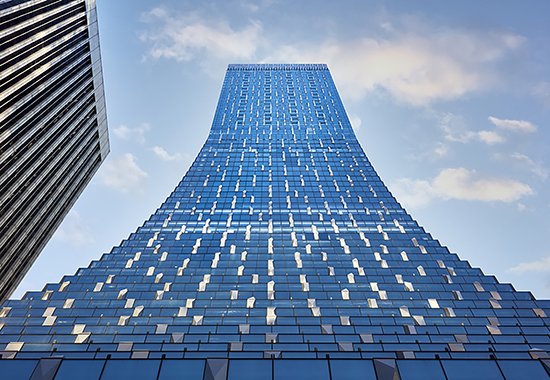 Once in a while, a project makes history and forever changes the future of building construction by introducing an innovation that interrupts the “way things are done.” Rainier Square is one of those projects. The 58-story, 850-foot-tall, 1.4 million-square-foot mixed-use tower in downtown Seattle was built using a first-of-its kind system, making way for faster, safer and more efficient tall-building construction with unprecedented schedule and cost savings.

Engineers at Magnusson Klemencic proposed using newly developed SpeedCore panels for construction of the new high-rise complex. This system put a 16-year-long collaborative research effort to the test and relied on the efficiency of the system’s modular, prefabricated, concrete-filled, composite-plate steel shear wall panels, which comprise the structural core.

Traditionally, a building of this size and scope is built with a reinforced concrete core surrounded by structural steel and composite-floor framing. This labor-intensive process requires setting formwork, installing reinforcing steel, placing embedded plates, and pumping and curing concrete level by level. With SpeedCore, all these steps are eliminated from the construction sequencing, saving time and money without compromising structural safety or stability — even in a seismically active region.

Using the SpeedCore system takes advantage of prefabricated elements and modular erection on-site with an unprecedented efficiency allowing construction to proceed 43% faster than conventional methods. As a result, construction ended 10 months sooner than first planned, saving the developer tens of millions of dollars and providing earlier revenue streams for the owner from rent paid for office floors, retail spaces and apartment units.

At the maximum pace of four floors per week, erection occurred at a lightning-fast tempo compared to traditional cores (one floor every three to five days). As a result, the project team celebrated the tower’s topping-out less than a year after the first modules arrived on site — an amazing achievement considering the building’s scale.

The new Rainier Square development successfully incorporates a vertical stack of residential apartments over commercial office space with a retail podium, an adjacent 10-story office building, and a grand hall lobby space that seamlessly connects the new development to its iconic neighbor, Rainier Tower, designed in 1970 by famed architect Minoru Yamasaki (most known for his design of the original World Trade Center towers).

Designed to preserve, enhance, and pay homage to its neighbor, 40-story Rainier Tower, the design had to achieve goals for the project and the surrounding neighborhood. Sloping steel columns not only give Rainier Square its unique, sweeping form, but also allow the new building’s east facade to curve upward so as not to block Rainier Tower. The unique duality of the design results in a visually stunning form that does not compromise on strength or height, but still sensitively maintains Rainier Tower’s views.

Named one of America’s Top 10 decade-defining steel projects by AISC’s Modern Steel Construction magazine, the use of SpeedCore to build Rainier Square is a winning combination of engineering innovation and industry advancement. As non-proprietary technology, SpeedCore is available to all, has captured the AEC industry’s imagination, and is reinventing the rules of high-rise steel construction.