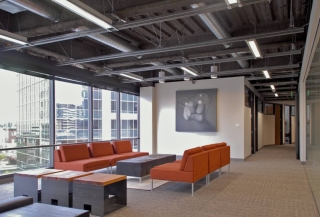 The Valve Software headquarters in downtown Bellevue has a modern industrial look.

Exposed steel beams and steel pan-decking are coated with crusty fireproofing material. A suspended steel staircase with precast concrete steps weaves its way through openings cut through levels of flooring, creating a sense a community. Florescent lights hang from steel channels attached to the high ceiling.

The mostly monochromatic expanse is punctuated with bright-colored modern designer furniture, fanciful artwork, clusters of water valves affixed to plywood panels where coats and hats are hung and, yes, a giant water valve in the lobby.

Welcome to what was early 1980s high-rise office space — complete with drop ceilings — in the Skyline Tower.

Seattle-based Replinger Hossner Osolin Architects designed the tenant improvements for the entertainment software and technology company at the 10900 N.E. Fourth St. building. JPC Architects is the project manager and architect of record and LMN the interior designer.

Foushee is the contractor and DCI Engineers, Hargis Engineers and Sparling are the structural, mechanical and electrical engineers, respectively.

Doug Lombardi, Valve vice president of marketing, said in an email that the company occupies 72,000 square feet on four floors. It will occupy another 17,000 square feet when tenant improvements now under way are complete. There will be about 300 Valve employees at the headquarters. 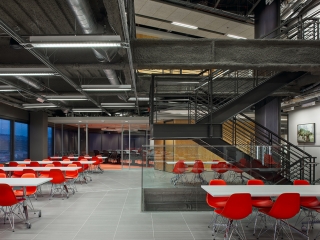 To make the space ready for Valve, the project team “just kind of scraped” it to its core, exposing beams, said Tim Hossner, a Replinger Hossner Osolin partner. “We thought the bones of the building were the most interesting part of it.”

“It's actually very unusual that a Class A building owner would even allow tenant improvements that are kind of this unique in their building because typically leases are relatively short term and the building owners are left with the space,” he said.

“The risk to the owner is ‘I can't bring a law firm in that will be interested in this space.' It's going to be harder for them (in the future) to find another firm to just pop in and have this kind of space work for them."

Lombardi said the TIs were never an issue with the landlord. “From the beginning they seemed to understand the unique needs that some software and technology companies have in their office space designs. They've been very helpful and great to work with. Unico, the property manager, has also been a great partner for us.”

Beacon did not respond to a request for comment.

Valve works large and collaborates, so the headquarters has mostly multi-person offices and team spaces, and employees use computers that are moved around on desks on wheels, said Hossner.

When complete, the headquarters will include a substantial computer server room and secondary server room and related facilities, and a break room with a kitchen and restrooms with showers and lockers.

Valve was founded by former Microsoft employees Gabe Newell and Mike Harrington in 1996. It is employee owned.

The firm started in the Evergreen building in downtown Kirkland, Lombardi said. It moved to the Bank of America building at Bellevue Place in 2001, and into Skyline Tower in 2010.

Hossner said one of the company's branding images is a black and white photo of a bald head with a red valve handle sticking out of the head. Somewhere along the way Valve acquired the large water valve now in the headquarters' lobby and carted it from office to office.

Replinger Hossner Osolin learned about the tenant improvement job after designing a modern villa in Seattle for Newell and his wife, Hossner said.